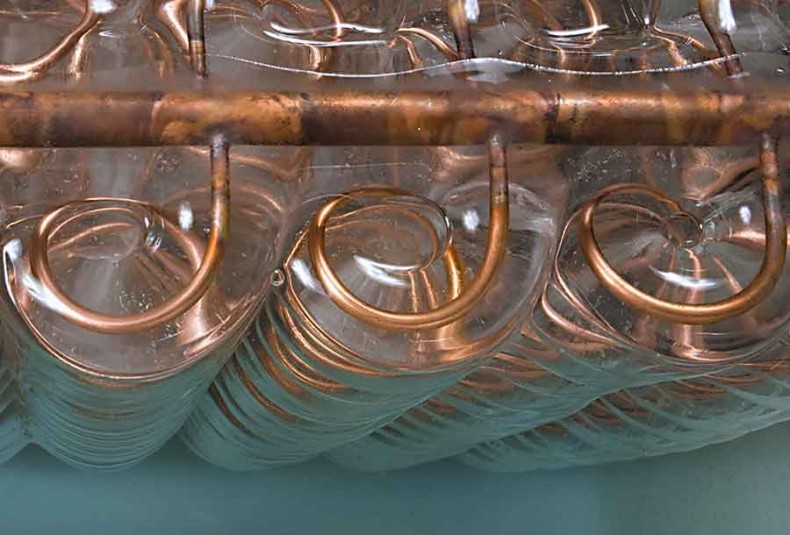 On a hot summer day, the best way to cool down your sweet tea is to add a few pieces of ice. Soon, an even bigger chunk of ice could be responsible for cooling down your home. Sound odd? Well, many commercial buildings are already using ice-based technology to do just that.

Ice-chilling your building, properly known as cool thermal storage (CTS), operates under a fairly simple principle: Make a lot of ice overnight, then use that ice during the day to keep the building cool and lessen the load on a traditional HVAC system.

This method for air conditioning can shift 95 percent of the energy air conditioning uses from the daytime to nighttime, when the ice is made. This is a big benefit to electric utilities, because electricity is almost always in more demand during the day than at night. They pass this demand down to their commercial customers by making them pay more for using a lot of electricity at once. By moving electricity use from daytime to nighttime, both the utility and commercial customers are able to save money.

Can homeowners benefit from this technology? At least one CTS company, Ice Energy, developed a residential version of its commercial technology that is already being deployed in California (with plans to expand nationwide later this year). When dispatched to provide cooling, its “Ice Bear” unit turns its compressor off and uses the stored ice to cool a home for up to 4 hours — consuming an estimated 5 percent of the electricity usually required.

It does take electricity to make that ice, so only consumers with a time-of-use rate or a demand charge will have an economic incentive to install a CTS system on their home. For everyone else, there are two more benefits. First, it can help lessen the strain on the grid during hot summer days, which helps electric cooperatives and other electric utilities manage resources, thus supporting system reliability. Second, thermal storage technologies like this can pair well with onsite renewable generation, like solar panels, similar to how a battery can store unused power for later use.

CTS technology can be added to existing buildings or built in from the get-go, but there are important considerations for this technology, predominantly around climate and structural integrity. CTS products work best in areas with a high air conditioning load and often need to be installed on top of the building they’ll serve. This means the building’s roof needs to be able to handle several thousand additional pounds; it takes a lot of ice to keep a building cool!

Other thermal storage technologies exist as well. Some electric cooperatives offer water heater control programs that function similarly to ice-cooling technologies, and smart thermostats are now routinely set to pre-cool or pre-warm homes. So the next time you’re waiting for your drink to cool down, check out what programs your electric cooperative has to offer.