How Your Cooperative Operates - Carolina Country
Between the Lines
October 2012

How Your Cooperative Operates

Member-owned businesses work for their members 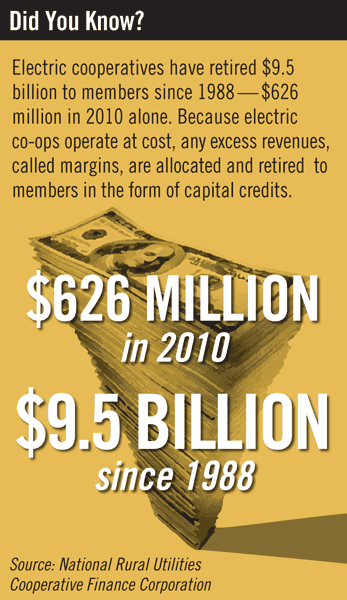 When you flip a light switch, charge your cell phone and set your air conditioning, the electricity you need comes from a utility that you own. Like other members nearby, you are a part-owner of your electric cooperative. As you can imagine, the business of acquiring and delivering that electricity is very complex.

These days, the need for reliable electric power is more important than ever. And the cost of doing business is greater than ever. Your utility wants you to understand how it operates so that you can maintain confidence that your power will be there when you need it.

Your utility was formed in the 1930s or 1940s as a cooperative, at a time when people in your area desired electric service but were not getting it from other utilities. Back then, it did not make business sense for an investor-owned power company to run lines and poles to sparsely populated areas. So local residents formed their own cooperative business in which each member had an account and a "share" in the business. Then as now, a cooperative operates not to make a profit, but to provide a service for its members.

In the U.S. today more than 29,200 businesses operate as member-owned cooperatives. Some examples are ACE Hardware, Farm Bureau Insurance, credit unions and food co-ops. Globally, more than 1 billion people are members of co-ops that generate 100 million jobs. Your electric cooperative is one of nearly 900 member-owned electric utilities nationwide.

How are electric cooperatives different than other electric utilities? Here's how:

Locally owned Electric cooperatives are owned solely by the members, including businesses, who receive electric service. There are 26 such co-ops in North Carolina serving some 950,000 member-accounts and 2.5 million people in 93 counties. Members elect local people to a board of directors. The board, in turn, hires the general manager who is responsible for day-to-day operations of the cooperative.

Not-for-profit Your payments for electricity provide funds for your co-op to acquire electricity, to build and maintain the poles, lines and offices, and to meet such obligations as loan payments, insurance and taxes. As in many other businesses, these costs are inching higher, and your rates reflect the need to make ends meet. Once the business has provided for its expenses, any "profits" are returned to members (as "capital credits" or "member dividends") according to their degree of patronage.

Democratic control All members have a voice and a vote in how their co-op operates. Annual meetings and elections encourage members to participate. Co-ops regularly communicate with members on how the business operates so members can be informed and engaged.

Cooperation among cooperatives While each of the state's 26 electric co-ops operates independently, they work collectively when it makes sense to work together instead of alone. Co-ops work together to generate and buy electric power, acquire equipment, train staff, communicate with members (Carolina Country magazine, for example, is published by 24 subscribing co-ops), help each other after major power outages, participate in public policymaking, and other activities.

Community involvement As locally owned businesses, electric cooperatives have a stake in the prosperity of the communities they serve. That's why your cooperative is involved in donating to local organizations, grants for school teachers, membership in civic groups, loans for economic development projects, and support for businesses.

What You Can Do

Read your cooperative’s annual report and attend the annual meeting.

Cooperatives have existed since humans first joined in a mutually beneficial enterprise. Tribes organized as cooperatives. In the 1700s in Great Britain, cooperative businesses formed. Benjamin Franklin in the 1750s helped form the first insurance business owned by policyholders. In England in 1844, the Rochdale Society of artisans codified the Cooperative Principles still followed by co-op businesses today.

The cooperative business model works, and it works for you.