In charge of the light brigade 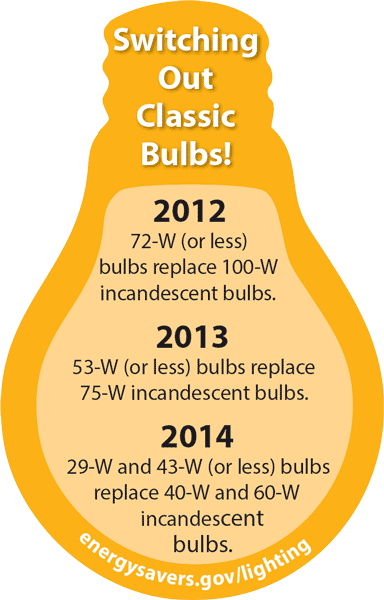 You may have already noticed that your local stores carry fewer, if any, of the traditional 60-watt and 40-watt light bulbs. In the last of a multi-year phase-out of the traditional incandescent bulbs — considered inefficient by today’s standards — the old-style 60-watt and 40-watt bulbs as of Jan. 1 can no longer be manufactured or imported in the U.S.

The 2007 law signed by President George W. Bush required new light bulbs beginning in 2012 to use at least 28 percent less power than the conventional incandescent light bulb. The law is technology-neutral, so any type of bulb can be sold as long as it meets the efficiency standard.

While some politicians decried the requirements as “over regulation,” the change was in fact promoted by the lighting industry. “Light bulb manufacturers whole-heartedly supported the efficiency standards,” wrote Timothy P. Carney in the Jan. 3 Washington Examiner. “General Electric, Sylvania and Philips — the three companies that dominated the bulb industry — all backed the 2007 rule, while opposing proposals to explicitly outlaw incandescent technology (thus leaving the door open for high-efficiency incandescents)…This wasn’t a case of an industry getting on board with an inevitable regulation in order to tweak it. The lighting industry was the main reason the legislation was moving.”

Replacing a 60-watt incandescent bulb with a 13-watt, $3 compact fluorescent bulb can save a household at least $30 in energy costs during the life of that bulb — which can be 10 times longer than that of an incandescent bulb. A 12.5–watt LED bulb that is dimmable and can last up to 20 years costs about $30.