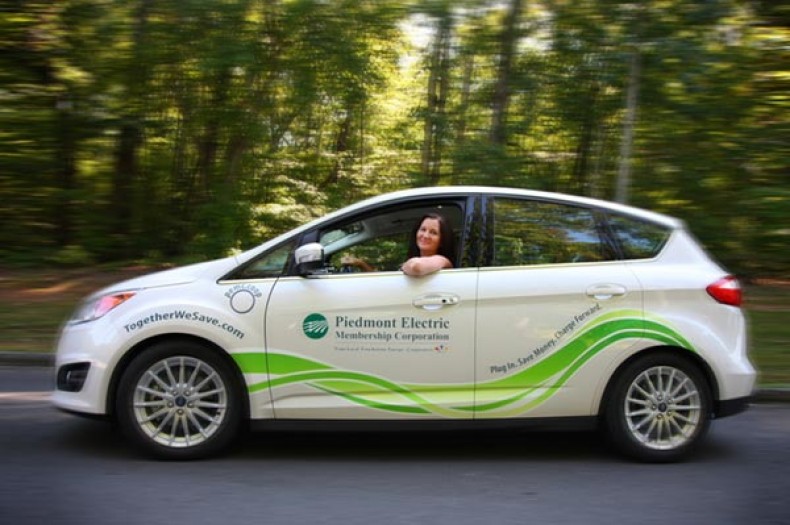 Piedmont EMC, based in Hillsborough, has two Ford C-MAX Energi Plug-In hybrids—part of a new class of vehicle known as a “hybrid plus.” These cars are designed to deliver maximum efficiency by combining a state-of-the-art rechargeable plug-in battery and electric motor with a gasoline engine. The two cars average about 70 MPGe (the equivalent measure of gas fuel efficiency for electric mode operation). The co-op offers a free Electric Vehicle Calculator to help members determine the expected costs and savings associated with electric vehicles. Members can visit pemc.coop and search “EV Calculator” to find the calculator and additional information to make an informed decision to determine which electric vehicle is best for them.

Electric vehicles have come a long way since they were first developed in the 19th century. The first successful American electric vehicle was invented by William Morrison of Des Moines, Ia., and it reached a not-so-speedy top speed of 14 miles per hour. Today, electric vehicles accelerate much quicker — the Tesla Model S P85 can do 0 mph to 60 mph in 4.2 seconds — and their list of additional benefits is growing longer.

Planning to buy one?

Electric cooperatives support the use of electric vehicles and will help members who plan to acquire one. Notify your co-op if an electric vehicle is in your future. The co-op can analyze the equipment at your home or business to ensure its adequacy and safety for charging your vehicle.

An electric vehicle uses electricity as its primary fuel or uses electricity along with a conventional engine to improve efficiency. Owners are purchasing the vehicles for all kinds of reasons. Many decide to buy when they hear about the fuel savings. Drivers see around $1,300 in savings a year, compared to gasoline auto expenses, when they drive an average of 12,000 miles. They also can realize substantial tax credits that encourage low-emission and emissions-free driving. Additional benefits include environmental improvements because of reduced vehicle emissions, energy independence by way of using locally-generated electricity, and economic development due to the increase in local job opportunities from a growing demand for the vehicles.

The vehicles are also gaining support because of their driving performance. They are much quieter to operate than previous models, and a gearless or single gear design in many electric vehicles eliminates the need for gear shifting, giving the vehicles smoother acceleration and braking. Electric vehicles also have a high torque over a large range of speeds during acceleration. As explained by Kyle Brown of Apex, who drives a Chevy Volt, "It's kinda cool when you have a loud Corvette or other internal combustion engine sports car pull up beside you at a stop light and then you just leave it far behind when the light changes."

Cities and businesses across North Carolina are beginning to prepare for the changes that will come as more electric vehicles begin driving on local roads. The biggest change that will need to be made is the installation of charging stations, where drivers can plug in their cars to refuel. Currently, there are more than 512 public charging stations installed across the state. Around 10 of these are publically available DC Fast Charge stations, which can charge a vehicle to 80 percent capacity in under 30 minutes. The DC Fast Charge Stations are located on many of the major highways including I-85 (Gastonia and Durham) and I-40 (Raleigh). There are also a few stations on Hwy. 64 in Pittsboro, Apex, Rocky Mount and Plymouth. Drivers can find their closest public charging station by using apps and websites like Plug Share and the U.S. Department of Energy's Alternative Fueling Station Locator.

Charging stations can be installed for private or public use. Many cities, towns and counties are installing charging stations for all residents and visitors to use. The EnergyUnited cooperative installed a charging station at its Statesville office and one at Childress Vineyards in Lexington, both available to the public. (EnergyUnited also has a limited rebate program for members who acquire electric vehicles. Find details at energyunited.com) The town of Dallas in Gaston County installed four public charging stations off Trade Street, one of the most heavily traveled routes in the town with around 16,000 cars passing through a day. 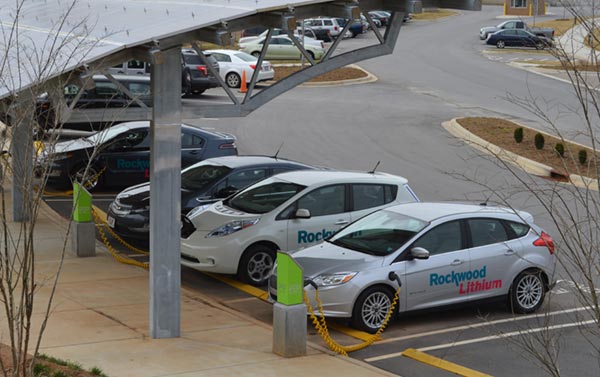 Businesses and colleges are also installing the stations for use by their employees, students and visitors. The University of North Carolina at Pembroke is the first college in North Carolina to become a partner with the U.S .Department of Energy's Workplace Charging Challenge, an initiative to increase charging at businesses across the country. The school is installing two charging stations and a 2-kilowatt solar system to reduce the campus' carbon emissions. The school is also developing an electric vehicle plan with input from faculty, staff and students.

In addition to charging station installations, North Carolina is also seeing growth in local jobs related to electric vehicles. Rockwood Lithium, Inc., expanded their manufacturing facility in Kings Mountain, Cleveland County, in 2012 to increase production of lithium hydroxide, a key ingredient in batteries for electric cars. The Kings Mountain facility has 150 employees and concentrates on battery development, engineering and company operations. The facility also has charging stations installed for employees to use.

At the other end of battery manufacturing is battery recycling. Umicore, a global materials technology and recycling group, has a location in Maxton, Robeson County, that is doing just that. The Umicore recycling plant receives end-of-life battery packs and dismantles them manually. They remove metals like steel, aluminum and copper wiring and recycle them locally in North Carolina. The battery cells are also removed and shipped to Belgium where recycling of the cell's critical elements — cobalt, nickel and copper — is completed. Umicore has partnerships with many car manufacturing companies and is studying when they will see more end-of-life batteries come through the plant.

Learn about Advanced Energy’s electric vehicle work in the Programs section of advancedenergy.org.

Electric vehicles are making a significant impact in North Carolina, both in increased adoption and job opportunities. Electric drivers are also continuing to support their decision by encouraging others to learn more about the vehicles and sharing their experiences. As Bruce Moore from Cary explained, "My father was born in 1919. He grew up when the automobile was going mainstream. I saw an opportunity to be the next generation to take electric vehicles mainstream. Best decision I ever made."

Kristi Jacobsen is outreach coordinator with Advanced Energy, a Raleigh-based non-profit organization that performs design and implementation, consulting, training, testing and research for electric utilities, governments and other partners.