Renewables on the roof - Carolina Country
Feature Story
May 2022

Renewables on the Roof 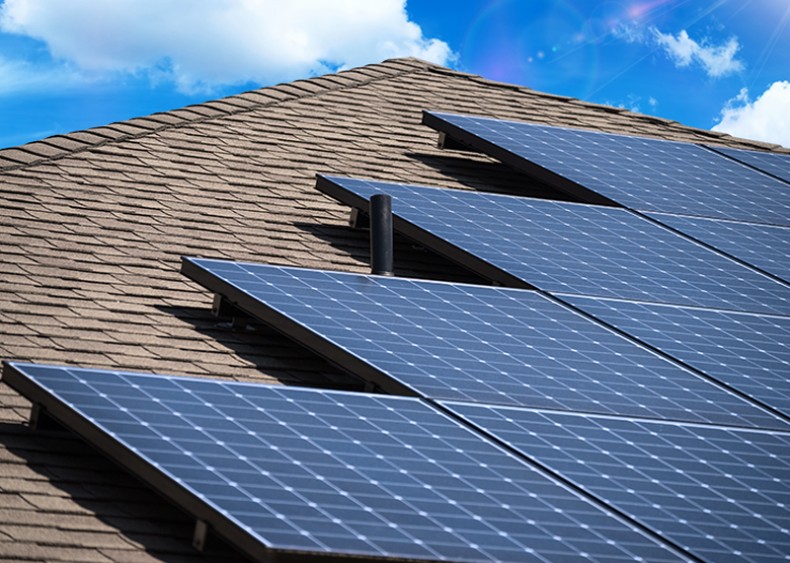 For most North Carolina homeowners, a roof, in itself, is a substantial investment. Shingles, roofing materials and labor all add up, as anyone who’s had to have a roof replaced can tell you.

A little over three years ago, retired Army helicopter pilot David Page, a member of Dunn-based South River EMC, started looking at his roof with a different kind of investment in mind: solar power. A federal rebate and a desire to lower his monthly electric bill spurred initial online searches of local solar companies.

But as he quickly discovered, rooftop solar is a major investment, and doing research — including working with his electric co-op — was going to be key to making a sound decision.

“I said to my wife, ‘You know what? Maybe I need to call South River to find out what’s involved,’” he remembers.

“Look at it as an investment. A lot of solar companies push that the electric bill is going to go down, but take that with a grain of salt... people just need to do research and keep an open mind.”

South River EMC Energy Services Adviser Robbie Talton  — one of the of the co-op’s “Advise Guys” — discussed solar as an option with Page based on his goals and his overall home energy use. Armed with the right information, Page then met with four local solar companies and went with the one that “wasn’t interested in pushing financing.”

With the federal tax credit, Page expects the system will pay for itself over the course of 11 to 13 years. With that length of payoff, however, he doesn’t see it as something for a typical homeowner.

“Look at it as an investment. A lot of solar companies push that the electric bill is going to go down, but take that with a grain of salt,” he says, explaining that some companies exaggerated potential savings. “People just need to do research and keep an open mind.”

Solar in the spotlight

These days, it’s hard to avoid commercials from residential solar companies touting the benefits of the renewable energy resource. The main reasons behind the solar buzz are declining costs and improved technology, as well as increased public interest in renewable energy.

Solar photovoltaic (PV) panels, which are made of materials that convert sunlight into electrical energy, have made huge strides in efficiency and affordability over the decades. Research and development has enabled the cost of large, utility scale solar to decrease from an average $4.75 per watt (DC) in 2010, to less than a dollar a watt (DC) in 2020, according to data from the National Renewable Energy Lab. Residential solar prices benefited as well during that period, with a steady decline in both soft costs, like installation labor, and hardware costs, like panels and inverters. (Supply chain issues and general increases in construction labor costs in recent years may lead to an uptick in average costs, although 2021 data was unavailable at the time of publication.)

North Carolina has seen an annual increase in the number of installed residential solar systems since 2016, hitting a peak in 2020 when 5,717 homeowners installed new systems, according to the latest data from the NC Sustainable Energy Association (see charts). 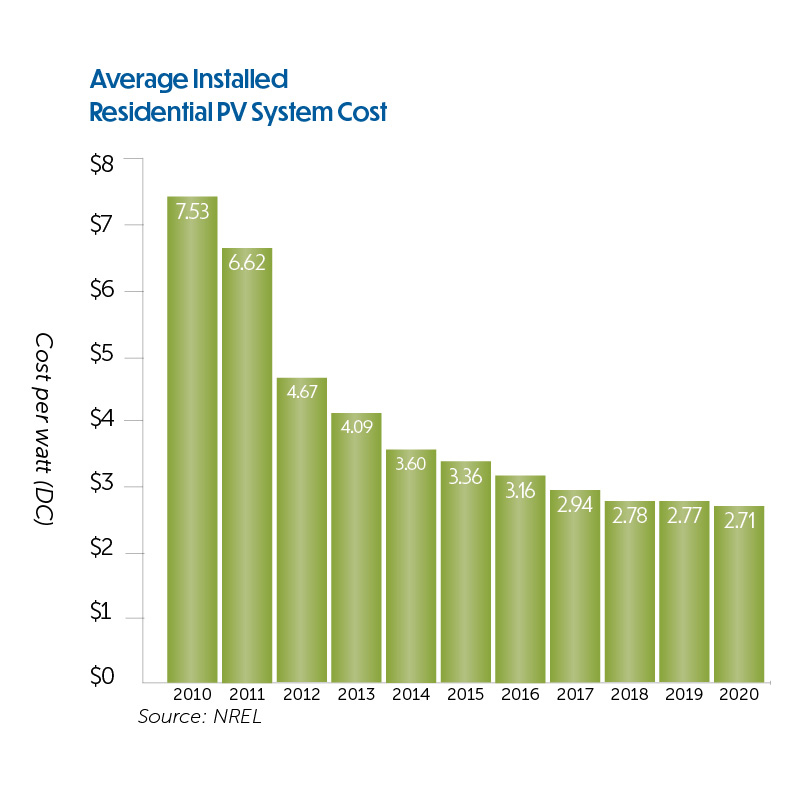 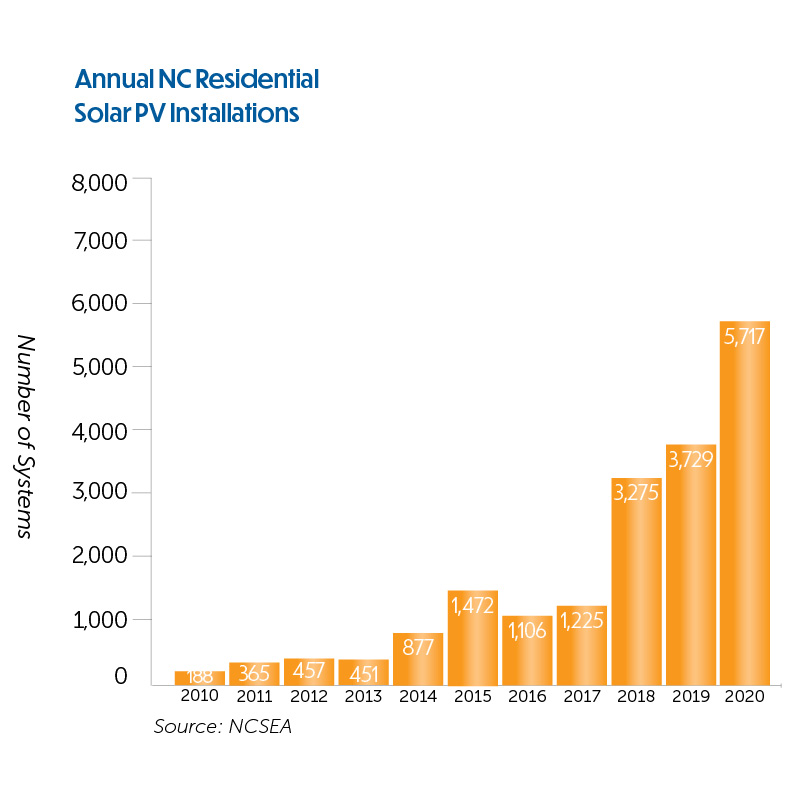 That growth is scattered across the state, although urban areas and surrounding counties are seeing more concentration. Jake Thomas, manager of Marketing & Energy Services for Monroe-based Union Power Cooperative, which serves counties in the Charlotte region, said he noticed interest in solar increased during the pandemic.

“We live in such a busy world — with everyone slowing down during the pandemic, it allowed more time for people to do some research,” he says. “Our solar inquiries and requests continue to grow.” 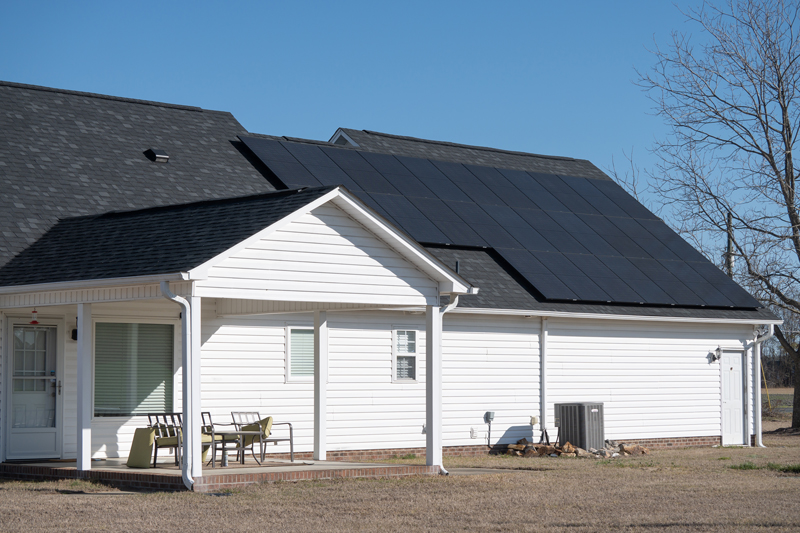 For those considering solar power for their home, the message is clear: due diligence is critical. That starts with taking time to think through personal home energy goals and whether solar power is the most effective way to meet them.

“Solar energy is a really enticing enhancement for many people, but it is definitely not for everyone,” says Catherine O’Dell, vice president of Member Services and Public Relations with South River EMC. “We encourage members to call their cooperative and speak to an energy expert, check out resources like the PVWatts® Calculator for an accurate estimate of solar output, and perform a payback analysis in order to make an informed decision.”

Other basic factors to consider include: 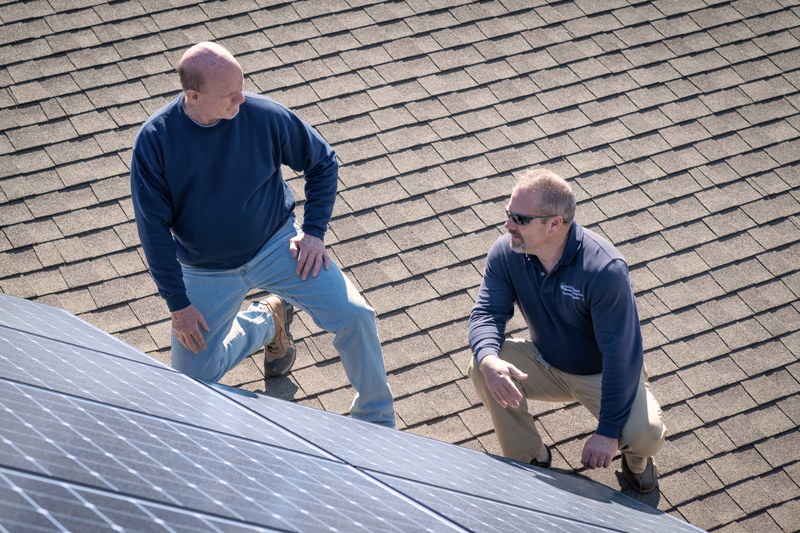 As David Page discovered early in his solar journey, working with your electric cooperative upfront can go far in making a sound decision. Your electric co-op can help assess your home’s energy use and make sure you have all the relevant data to make sense of quotes from solar companies.

“We want to equip our members to lead conversations with vendors, as opposed to solar companies leading those conversations,” Union Power’s Jake Thomas says. “We’re not going to make a decision for our members, but it’s our job as their energy partner to ensure we put all the relevant information on the table. We don’t want there to be any surprises.”

In addition to the electric cooperatives quoted, Burgaw-based Four County EMC contributed to this article.