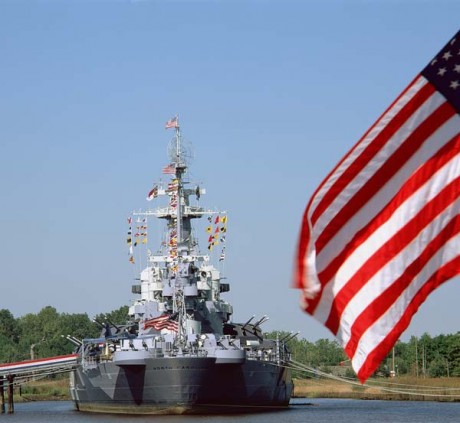 In her heyday, the USS North Carolina was a furious force. The battleship participated in every naval offensive in the Pacific area during World War II, and by war's end had sunk an enemy troopship, carried out nine shore bombardments, destroyed at least 24 enemy aircraft and earned 15 battle stars.

Today it continues to be exceptional as a tourist attraction and memorial to North Carolinians who gave their lives in military service during World War II. Visitors who navigate the well-marked, self-guided tour learn that the ship boasted more than 2,300 men aboard and doubled as a floating city with its own post office, doctor's office, laundry, shoe shop and tailor. The battleship is open daily and also  regularly offers in-depth programs, including a look at its power plant and weaponry. For battleship information, call (910) 251-5797 or visit www.battleshipnc.com.

Wilmington is awash in art galleries, shops, restaurants and watering holes. An especially unique attraction is the Serpentarium, which features some of the world's most dangerous and deadly snakes, lizards, dragons and crocodiles in lush settings designed by the film industry. Visitors ooh and aw over its King Cobra, Monitor Lizard, giant Anaconda, Burmese Python and Nile Crocodile, to name a very few. Cape Fear Serpentarium is on Orange Street (where it meets the river) and is open daily.

Learn of other nearby adventures and events: