A veteran hunter shares his knowledge with youth 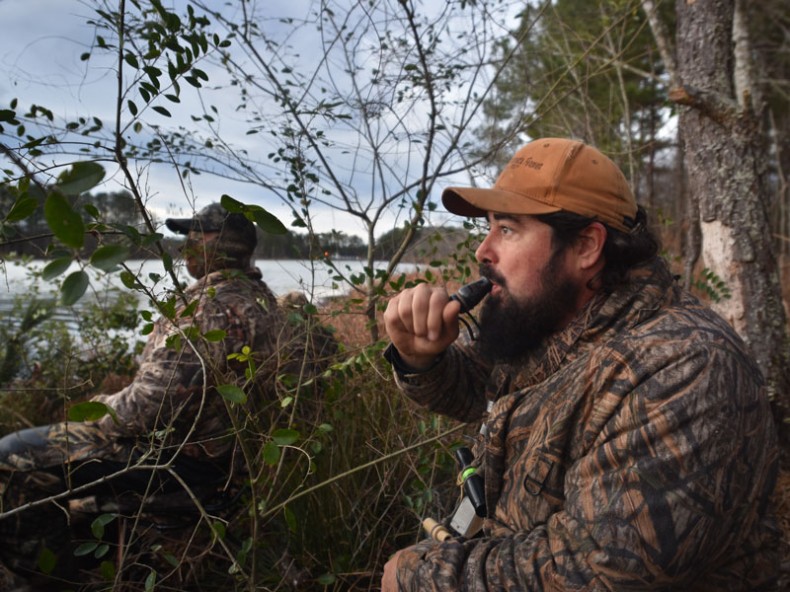 Carlton Carlton uses his duck call to lure a flock of ringed-neck ducks to the decoy spread.

It was a blustery 35 degrees as our two trucks rolled across a dike and stopped near a private pond in Harnett County. I was alone in my truck, my friend Carlton Williams had several passengers in his — old friends Emsley Griffin and his son, Eason Griffin, along with Hoss Griffin and his nephew, Case Walker.

Once parked, Carlton donned waders, unloaded a creek boat (sort of a wide-beam kayak) and loaded a bag of decoys in it. He pointed out our blind site as a barred owl hooted off in the distance.

Carlton, as he does several times a season, was determined to get the boys on some ducks. The last two Saturdays of duck season in North Carolina are for youth, as well as veterans and active-duty military.

After putting out 25 decoys, Carlton beached his craft and used a battery-powered chainsaw to gather some limbs to “brush out” a blind for the hunters. Each boy had a shotgun and close adult supervision.

“I want to keep the tradition of kids getting into the outdoors and share that knowledge that took me years to learn.”

“Y’all get loaded up,” Carlton told the boys. “You got about a minute until legal shooting light.”

With that, Carlton unpacked a camp stove and put some bacon in a skillet. He forgot a pan for serving, so each piece of bacon was hung on a greenbrier vine when done. He had brought the bacon back from a waterfowl trip to North Dakota, declaring it the best he’s ever eaten.

A pair of wood ducks buzzed the hunters before they were ready. Then, a lone ring-neck duck checked out the decoys but flew on.

“Ring-necks are my bread-and- butter,” said Carlton, who was sitting about 10 yards behind the hunters. “They decoy well. We’re starting to get a little light on the decoys. They like to see where they’re landing.”

Two Canada geese flew by, and since goose season was open, the boys shot — and missed. Another duck came in and was missed as well. (The boys were not shy about pulling a trigger.) Carlton finished with the bacon and started venison breakfast sausage patties he made. After few minutes, the hunters wandered up and started eating bacon and sausage sandwiches. I asked Hoss Griffin about the morning and his high school buddy.

“Well the thing about Carl is, he’s second to none in bending over backwards in putting this together,” he said. “Obviously, if it wasn’t for Carl this wouldn’t be possible. We don’t have the ducks where we’re located. There’s a few but nothing like you experience here. Brought the boat and decoys, cooking us breakfast.”

“I want to keep the tradition of kids getting into the outdoors and share that knowledge that took me years to learn,” he said. “So it continues on. Duck hunting is a good starting point for kids because there’s a lot of activity. Not as much sitting still and being quiet. There’s a little more interaction with wildlife, working the birds with decoys and calling and getting a response from wildlife. It’s more excitement for someone starting out.”

Before heading back to Wadesboro, Case decides he want to get his duck mounted. In his last selfless act of the day, Carlton goes to his freezer and gives each boy a dressed duck to take home. A kind end to a memorable morning.