It’s an ongoing task that can succeed using multiple control methods. Be smart, be legal, and good luck! 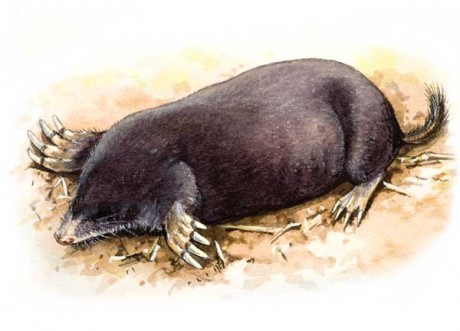 We’ve all seen them — the tunnels marring beautifully manicured parks, fairways and cemeteries. But it’s most frustrating when those miniature mole highways are in the lawn you have worked so hard to maintain.

Before trying to eradicate the invaders, take stock of the situation. Does the damage warrant trying various methods? Moles actually provide positive services: they aerate soil and mix the layers, they eat pest larvae including white grubs and Japanese beetles.

The three species of moles in North Carolina are the eastern mole, the hairy-tailed mole, and the star-nosed mole. Each is from 4–8 inches long with a protruding snout, gray to black fur, and clawed feet. They do not eat plant roots or bulbs, but dig tunnels in search of food, up to 150 feet of pathway per day. They eat mainly grubs, earthworms, ants and beetles, and consume them at 50–100 percent of their body weight each day. Moles prefer moist soil without much gravel or clay. They are active year-round. They tend to be solitary unless it is a female caring for her young, so it may be just one mole making a mess of your entire lawn.

Get a depredation permit

Moles are difficult to control. First, they have a variety of food sources, so if you eliminate one, they can switch to another. Second, having moles means you have good mole habitat. If you eradicate your one mole, another may take up residence. And third, because moles are a wild, non-game animal, you need a depredation permit to legally trap or kill them.

Some methods have no proven success: broken glass, pins, mothballs or hair in the tunnels; devices that emit sonic noises or vibrations; planting the caper spurge. Repellants containing castor oil have not been proven effective, and there is concern about the toxicity of castor beans. Methods illegal in North Carolina include using any type of chemicals, poisoning, fumigating or gassing.

While not guaranteed, the two main avenues of control are:

You also can encourage natural predators such as snakes, owls and pets. Ask your county Cooperative Extension how to create beneficial habitat for native species.

Watch how to set a trap: