Rising From the Red Clay

The art of Senora Lynch pays tribute to her Haliwa-Saponi community. 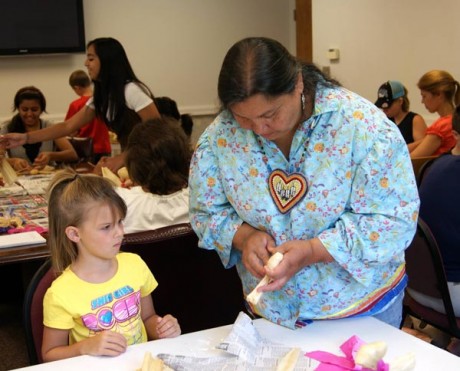 Senora Lynch making cornshuck dolls at one of her workshops.

The clay art of Senora Lynch is displayed in galleries across the country, including the Smithsonian Institute in Washington, D.C. A member of the Haliwa-Saponi tribe, she lives in Warren County with her husband, Dalton, and daughter, Elizabeth. She is a regular artisan at the Village of Yesteryear at the North Carolina State Fair, where her work is on display this month. Her work was displayed at the 1996 Olympic Games, and in 2004 she was commissioned by the University of North Carolina at Chapel Hill to create a public art piece based on Haliwa-Saponi traditional culture.

Haliwa-Saponi means "People of the Red Clay," so it is only fitting that Senora's art medium is clay. She learned the art of pottery from her elders, first doing elementary tasks like digging clay from the creek banks. She began creating her own work when she was about 14.

The North Carolina Arts Council heard about Senora's work by word-of-mouth. They helped her apply for grants to develop and promote her art. Senora says she is very grateful for the arts council support, but she acknowledges her husband as her biggest supporter and promoter. "He really loves the art, and he loves talking to people." She says her best critic is her daughter, who is also a potter and doesn't mind telling her mom if a pot looks lopsided.

Senora Lynch uses the traditional coil method to build her pots. Her work is recognizable by her technique of using red clay to form her piece, and then whitewashing it with layers of liquefied white clay. She etches intricate designs through the white layer so the red clay beneath shows through.

Grandmothers, mothers and children come to learn from Senora Lynch. Everything Senora creates has a story and meaning behind it. As she teaches her crafts, she tells stories that have been handed down for generations in her family, stories that not only entertain but also teach important life lessons.

When asked what she hopes her art will mean to her community, Senora says, "My Mom said to me, 'Do something to help your people.' I hope the stories are carried on through my art. I think about our kids and how things are moving so fast in this world. I hope I can reach just one or two to keep our traditions going."

Senora says it is important for people to know their history. She hopes to dislodge some of the stereotypes children have come to believe about Indians and to make people aware that "we are still here." Senora says she loves teaching and hopes to one day have a studio big enough to hold classes on a full-time basis.

Economic development is a big concern for Senora and the Haliwa-Saponi people in Warren County. Some people still farm, mostly tobacco and corn, but many have to go outside the community to find jobs. One project being explored is the building of an amusement park and a museum. The community hopes projects such as these will both provide jobs and a way to share Indian traditions with the public.

When thinking about how something like an amusement park will affect her community, Senora says, "I want development, but I am a little afraid of it. I'd like to see us grow, but stay together." She hopes that by bringing jobs into the community with something like the park the people will remain together and be able to keep their history and traditions alive.

Halifax EMC and the Haliwa-Saponi

Halifax EMC, the member-owned Touchstone Energy cooperative serving Warren County among others, has long supported the cultural and community development of the local tribal community surrounding Hollister. In addition to various sponsorships, Halifax EMC has installed lighting for the ceremonial arena where tribes from all over the country gather in April for one of the region's largest annual powwow events. Brady Martin, the co-op's manager of marketing and economic development, serves along with tribal administrator Dr. Joseph Richardson on the statewide board for the N.C. Indian Economic Development Initiative (NCIEDI), representing the North Carolina Native American people of Halifax, Warren, Granville and Person counties. Two Halifax EMC employees are members of the Haliwa-Saponi tribal organization. The co-op supplies electricity to the tribal charter school, the multipurpose ceremonial facility, and many of the homes, churches and businesses owned by tribal members.

100,000 American Indians live in North Carolina, making it the state with the largest Indian population in the U.S. east of the Mississippi.

The Haliwa-Saponi is the third largest tribe in North Carolina, outnumbered by the Lumbee who are first and the Cherokee second.

3,800 Haliwa-Saponi people live in and near Hollister, Warren County. They were recognized by state of North Carolina in 1965.

Learn more about the Haliwa-Saponi Indian Tribe at www.haliwa-saponi.com