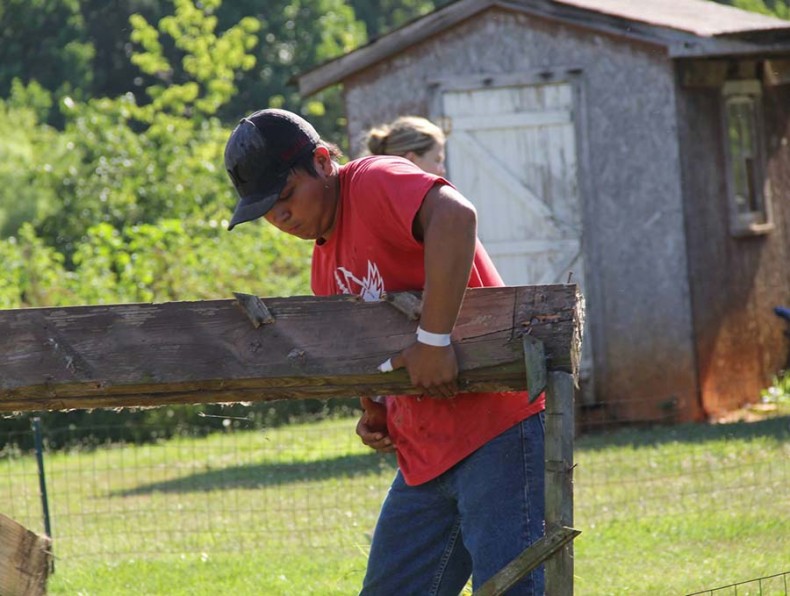 Impact Yadkin participants put in a week of hard work for homeowners in need.

In Yadkin County, teacher and pastor Chris Hauser is steadily working to fill both the spiritual and physical needs of those in his community.

For many, he’s literally been the answer to their prayers. For a growing number of kids — influenced in a positive way by his example — he’s a hero. 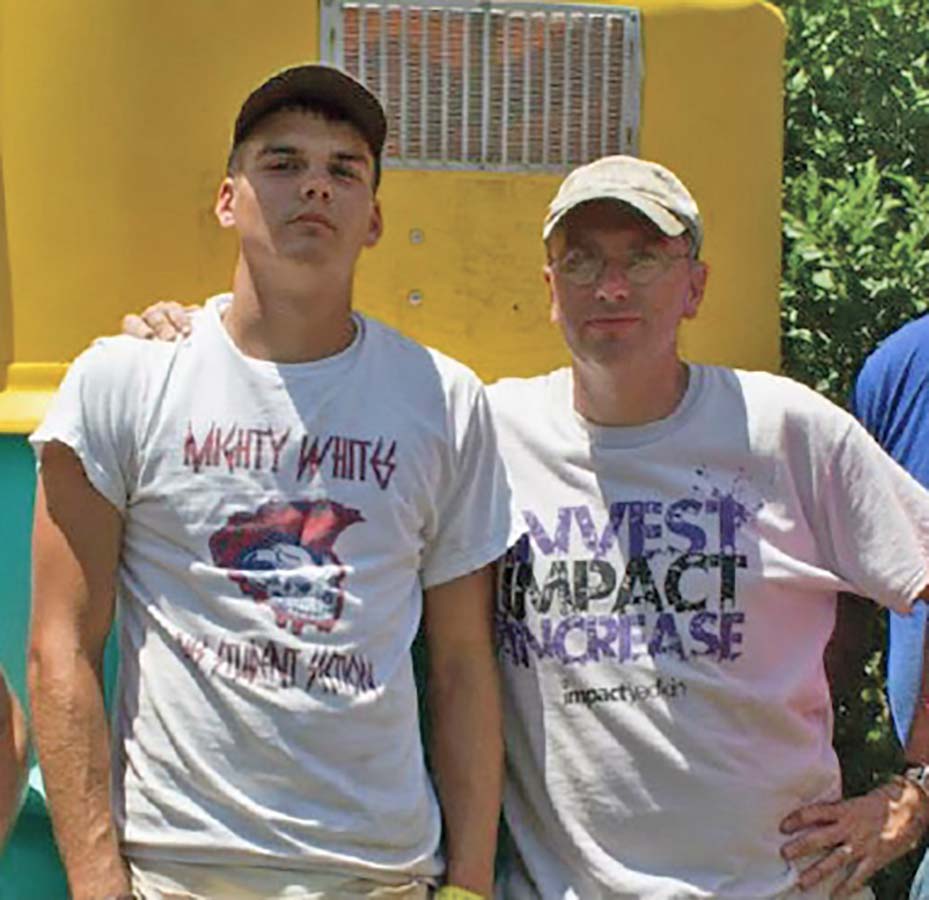 Hauser (right) with a volunteer

Hauser graduated from Forbush High School and pursued an accounting degree from UNC-Greensboro, but a calling to reach out to hurting people eventually took him to Southeastern Baptist Theological Seminary in Wake Forest, where he got his Master’s degree in Divinity. That led to his current roles as associate and youth pastor at South Oak Ridge Baptist Church, as well as a substitute teacher at Forbush High.

Hauser has participated in mission projects throughout the U.S. and Canada, but it was during a trip to Huntington, West Virginia, where he first visualized what has become “Impact Yadkin.” Hauser witnessed small churches rallying together to address their community’s needs, and he realized that meeting people’s spiritual needs alone was not always enough. People often needed compassion demonstrated toward their physical needs as well.

So in 2009, Hauser collaborated with some friends to organize “Magnify Ministries,” an effort to reach out to Yadkin homeowners who needed, but were unable to provide, minor repairs such as roofing, painting, landscaping and building handicap ramps to make their homes more accessible. Two years later, the ministry became a non-profit 501(c)(3). “Impact Yadkin” was created and launched that summer, putting 400 volunteers to work, most being local youth.

The next Impact Yadkin, held every other summer, is scheduled for June 10–17, 2017. Applications for project recipients are due Wednesday, Feb. 15, and can be downloaded at magnifyministries.org.

With the supervision of adult skilled workers, they completed 55 home repairs, with minimal or no expense to the homeowners.

“I witness the students being affected more than the homeowners,” Hauser says. “They learn hard work, compassion, service and a desire to better their community.”

NC State sophomore Morgan Hobson reflects on how he observed Hauser’s (known as “Hooz” to most students) integrity during the process of handling difficult situations — a priceless picture tucked in the mind of a student.

“Hooz changed my life,” Hobson says. “I don’t think he gets enough credit for the things he’s done for people like me.” One project Hobson worked on during his time with Impact Yadkin was a deck and ramp for a lady who lived alone. “I did a lot of stuff I’d never done before and that helped me, but the best part for me was reading on the faces how appreciative they were for the work. Sometimes they just needed somebody to talk to.”

By 2015, “Impact” had grown to 1,200 volunteers, mostly students taking a week during the summer to live, work and grow together. Chaperoned by experienced volunteers, crews were able to take on 80 projects, from repairs to making homes handicap accessible. Close to $100,000 worth of lumber was discounted by local businesses and purchased for around $60,000.

Homeowners John and Frankie Fletcher were recipients of one project, a wheelchair ramp.

“The entire experience was a blessing,” John says. “The young people took turns coming in to talk to us and they told us about themselves and their faith.” He adds that they even shared their lunch with them and “left us with a very-much-needed ramp that has been in use every day since.”

For a young person to be involved, the age requirement is 7th grade through college and they have to raise a $200 donation to the organization. Not to leave the younger kids out, Hauser has started “Party in the Park.” Each morning during the week of Impact, K–6th graders gather at the nearest park from 9 a.m. until noon to learn Biblical lessons and have fun. Hauser emphasizes the importance of the many volunteers it takes to make all this happen.

“It is my prayer to teach our students to first of all share the Gospel with their community, and also demonstrate to them the necessity of meeting the physical needs of others,” Hauser says. “We must remember that missions begin at home, in our Jerusalem, and that is our neighbors and family.”

Sandra Miller, a member of Surry-Yadkin EMC, is a freelance writer and author of “When Mountains Move.”