Fishing for the Big Bucks 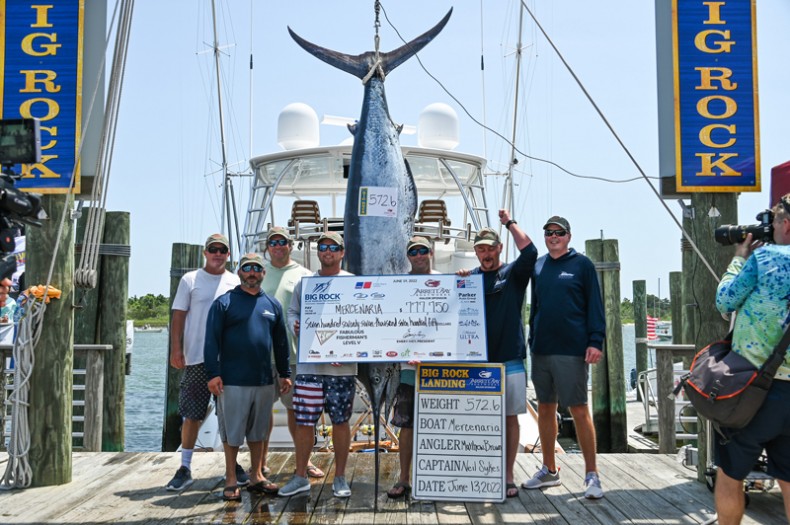 The crew of boat Mercenaria caught a 572.6-pound blue marlin on the first day of the 64th Annual Big Rock Blue Marlin Tournament, and it managed to hold up as the heaviest blue marlin weighed in for the week. Photo by Big Rock Tournament

It was over barely after it started, though it took a week to ensure.

The tournament, held in June and sponsored by Jarrett Bay Boatworks (see “Sportfishing with ‘Flare”), has roots going back to the day the first recorded blue marlin was caught off the North Carolina coast in 1957. At that time, the community in Morehead City pulled together the prize of a child’s red wagon filled with silver dollars — the prizes have since grown to exceed $1 million, and more than $5.8 million in prizes were awarded this year.

Since 1986, the Big Rock Blue Marlin Tournament has contributed more than $7.5 million to charitable causes in eastern North Carolina. In 2021, the tournament raised more than $1 million for the first time. Recipients include a variety of community improvement projects, marine conservation initiatives and education programs.

Most competing boats sailed out of Morehead City and Beaufort, or Hatteras and Outer Banks ports. All are fishing the Gulf Stream, and most boats are 40 to 70 feet in length. There is an outboard motor division, and those boats are about 23 to 36 feet in length. (They are considered “small,” and only one time has an outboard powered boat won the tournament.) It costs a little over $50,000 to enter all levels of the tournament for maximum return. This year, 266 boats competed and had 226 billfish releases.

Before the Mercenaria’s crew won the big prize at the end of the tournament, they also won the Fabulous Fisherman Division for weighing in the first blue marlin over 500 pounds, good for $777,750 on day one. The Cherrystone, Virginia, boat also won the Super 20 Division, good for $1,156,000, and other divisions for a grand total of $3,489,813 — a tournament record.

In the 25th Annual Keli Wagner Lady Angler Tournament presented by Truist, 215 boats and 800 lady anglers competed for their piece of the $318,750 purse. Can Do Too won with two blue marlin releases worth 800 points and $108,800. Second place went to MJ’S for releasing two blue marlin earning them $24,225. All In took third place worth $16,150 for releasing two white marlin and one blue. 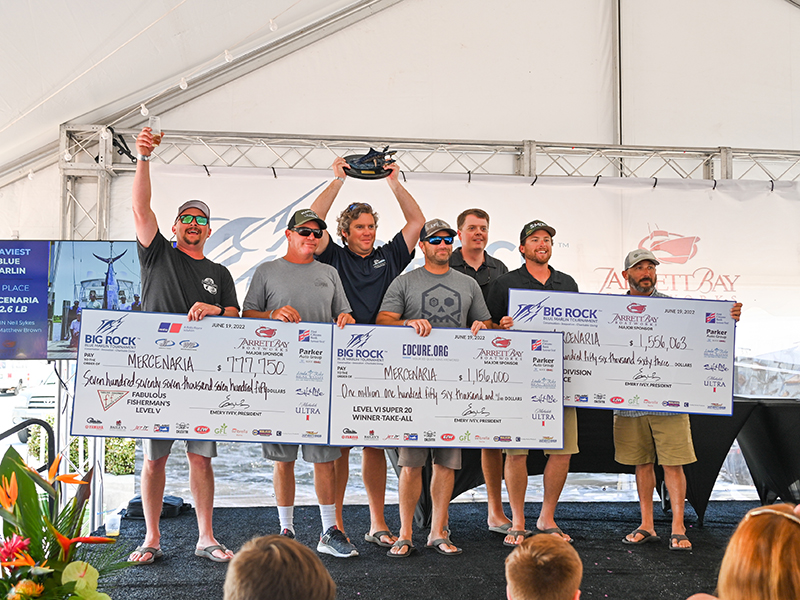 The ladies of the Capt. Stacy, chartered by the Delta Health Foundation, fished from the iconic headboat. Nearly 40 ladies from the Carteret Healthcare Oncology Center and cancer patients had the opportunity to compete in the tournament aboard Capt. Stacy.

Overall, the 215 boats racked up 50 released billfish and caught 47 gamefish.

Since 1986, the Big Rock Blue Marlin Tournament has contributed more than $7.5 million to charitable causes in eastern North Carolina. In 2021, the tournament raised more than $1 million for the first time. Recipients include a variety of community improvement projects, marine conservation initiatives and education programs.

And what happens to the fish? Only blue marlin that might place are brought to the scale. This year, the tournament had a 96% release rate. Fish such as tuna, dolphinfish and wahoo go home with the anglers, and the few marlin that aren’t released are used for scientific study by university marine labs.