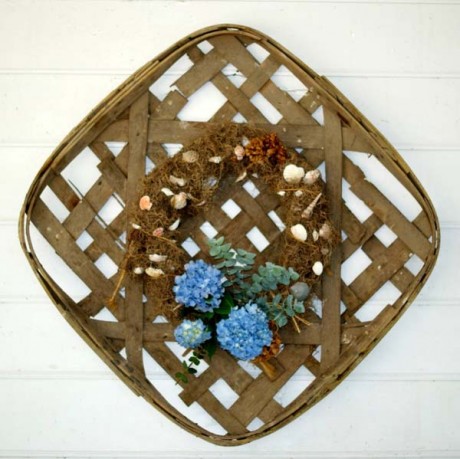 Tobacco baskets, once a common utilitarian product in the tobacco markets, have become a hot commodity as wall art in homes across the country. The first baskets were made in Kentucky, but North Carolina became the primary producer of tobacco baskets by the late 1800s. There were at least six manufacturers of tobacco baskets in Yadkin County at one time, earning it the title of "Tobacco Basket Capital of the World."

Tobacco was first exported from the colonies in huge wooden barrels called hogsheads. The barrels held about 1,000 pounds of the leaves. But the barrels made inspecting difficult and therefore cheating easy. The good leaves were packed on top, hiding inferior tobacco in the bottom of the barrel. Some crooked producers even went so far as to hide rocks and bricks under the tobacco. Eventually the hogshead method of marketing gave way to loose leaf auctions and private sales. Baskets were used to take tobacco to market even then, but apparently once it reached the warehouse the tobacco was placed on the floor.

R.J. Reynolds Tobacco Company is credited with coming up with the idea of using large flat baskets to keep their tobacco clean in the auction houses. The warehouse floors were filthy with mud, dust and manure brought in with the mule-driven wagons as tobacco was unloaded and stacked on the floor.

The baskets were made of oak that was split into strips. The oak strips were soaked in boiling soda water to make them bendable. The rim of the basket was fashioned with a double thickness of the strips. The bottoms were woven by machine, and another machine helped with putting the bottoms and the rims together. The tobacco companies purchased the baskets, and their names were stenciled on the rims.

There was an art to packing a tobacco basket so that it presented the tobacco well, and so that it stayed on the basket. After tobacco was picked and graded, several leaves were bound together in what were called hands. The hands were tied onto a stick (about 35-45 hands per stick) and the sticks of tobacco were hung in the barn to cure. After curing, the tobacco was taken off the stick, packed in baskets and transported to the market. The hands were usually arranged on the basket in a circle, stems ends out for good presentation in the auction (read more about the lives of North Carolina tobacco farmers).

This method of hand tying the leaves was time-consuming, and eventually the tobacco was brought to market untied, wrapped in large burlap sheets. This pretty much spelled the end for the tobacco basket market, and by 1969 the basket companies had closed. The J.A. Miller Basket Company reopened in 1976 to make baskets for the burley tobacco market, but by 1990 that market had also faded. Bud Miller, the son of J. Anderson Miller, who started the company in 1945, still makes a small number of tobacco baskets, some full size and a miniature version, which are bought and resold in shops to decorators and homeowners to use in homes as wall art.

Flea markets, thrift stores, antique shops and yard sales are good places to shop for original tobacco baskets for your own decorating project. Craig's List, Ebay, Etsy and other online sites will often yield the baskets. Prices range from $50 to over $300 plus shipping charges. If you live on a farm and have an old barn full of junk, check and see if you have a fortune in forgotten tobacco baskets.