NC Author is an Advocate for our State Dog

Libby Bagby has a passion for Plott hounds 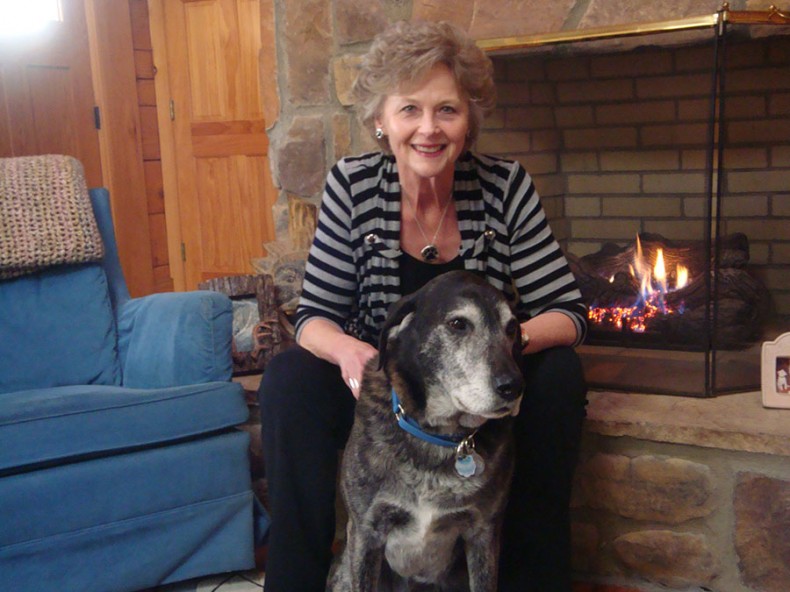 At home with Lucky, the rescue Plott hound who sparked her passion for the breed.

Libby Bagby never intended to be a writer. But since 2008, she has penned not one, but four books about North Carolina’s state dog, the Plott hound. Her first book, “Lucky’s Plott,” was inspired by the true rescue story of an injured Plott hound.

Driving along NC Highway 89 in Surry County in 2002, Bagby spotted the injured dog on the side of the road. He had two broken legs, but Bagby took him to a veterinarian and decided to adopt him, despite already having five dogs at the home she shares with her husband, Rick.

She soon discovered that the dog, which she named Lucky, was a Plott hound, designated as the state dog in 1989. She researched the breed and learned about its keen tracking instincts and qualities such as loyalty.

She knew she had to tell Lucky’s story.

“I didn’t know what I was doing,” Bagby, now a retired teacher, says about writing “Lucky’s Plott,” which was self-published in 2008. “I just sat down on the advice of a friend. She said to sit down and write down what happened. And that’s what I did … it just all came together well.”

“Lucky’s Plott” was the first of four books focused on the Plott hound.

The book tells the story of Battle Cry, a Plott Hound on his first hunt of the year when he is struck by a car, an incident that changes his life.

“I was very blessed,” Bagby says. “I really believe that the good Lord brought Rick and I Lucky in order to write this story because of our huge love for animals.”

In addition to writing the book, Bagby decided to raise awareness about the state dog, and she began speaking at elementary schools, libraries and other organizations.

“I never taught elementary school, and I don’t have kids,” Bagby says. “My kids have four legs and tails. I didn’t know anything about teaching that age group. So, I had to learn that, too, along with learning about the breed. It’s just been amazing.”

“My whole thing that I have tried to do with these books is to teach what the animals are like, to incorporate their character traits, which are the same as character traits that good Tar Heels should have,” Bagby says.

Most recently, Bagby penned “K9 Deputies: A Plott Hound Tale,” which tells the story of Kodie and Sadie, two Plott hound puppies adopted by the Guilford County Sheriff’s Department in 2013. The book follows the pups as they begin their training.

“It was a beautiful way to pay tribute to these precious two little puppies that they purchased,” says Bagby, who lives in Roaring Gap.

The nonfiction book, which is co-authored with Jan Carmichael, is written from Kodie’s perspective and traces the puppies’ journey to becoming members of the sheriff’s department. Chosen for their remarkable tracking and hunting abilities, the Plott hounds are ideal police dogs.

Bagby’s love of animals is evident throughout her books and storytelling. She just doesn’t write about animal rescue, but she lives it. During her 42 years of marriage, she’s had 12 dogs.

While Lucky passed away in 2013, she still has a 9-year-old lab named Rolo (like the candy). “We say he’s chocolate on the outside and sweet on the inside,” Bagby says.

Visit luckysplott.com for more information about Bagby, Plott hounds or to order books.