The Legend of Council Wooten 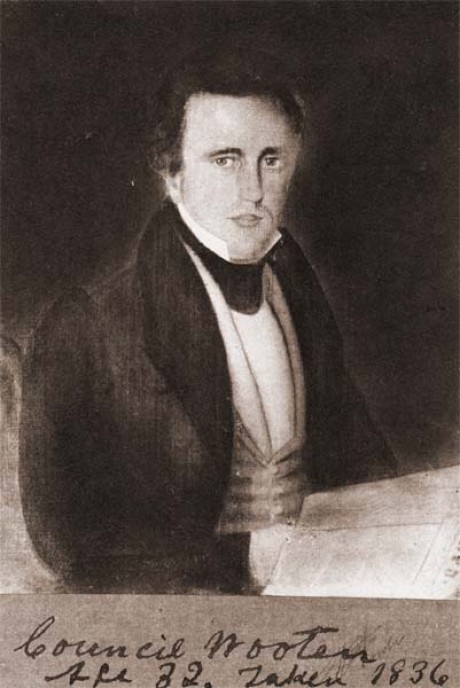 A portrait of Council Wooten about the time he served in the state legislature. They said of him, “If he did not like a law, he would run for office and change it.” (Courtesy of the North Carolina Museum of History)

Adorning North Carolina's halls of history are portraits of many well-known North Carolinians. Even though Council Wooten is not one of them, he made his mark on state government and did become a legend in his native Lenoir County.

Council Wooten (1804–1872) was the son of John Wooten, who began selling hats in Pitt County then expanded into Greene, Lenoir and Wayne counties. He would sell hats at monthly courting time, when a circuit judge would arrive to hear cases. Known for his "good judgment, thrift and economy," the elder Wooten managed to acquire 800 acres in Lenoir County where he established a plantation. The story is that John Wooten swapped his own undesirable land for 200 acres of rich swampland and 600 acres of upland owned by a man named Creel. Creel was in legal trouble over his land and was uncertain of his title to it. Wooten researched the title, found it fine, and convinced Creel to swap properties. The plantation, about five miles west of La Grange, raised corn and hogs and grew in size, making Wooten prosperous.

The elder Wooten served a spell in the North Carolina House of Commons, and his son Council followed, serving in the General Assembly in 1829–1832, 1835 and 1848. He also served on the Council of State with Thomas Bragg during the antebellum period and with John W. Ellis in 1861.

Council Wooten was known as a renegade of sorts. Lenoir County legend says he petitioned the General Assembly to grant free black men the vote, maybe to gain himself more votes. Although state law made it illegal, he and his wife, Eliza, taught their 500 or so slaves to read and write, using the King James Bible. He required that all his slaves be clothed well, and every winter he gave each family a fully dressed hog.

Wooten valued education, schooling himself and his 12 children. He founded a private school near his plantation and hired Yale University graduate Joseph Elliotte to run it. The Wooten School was open to neighborhood children and was always full. It closed after Preston Wooley opened a school in La Grange.

A personal friend of governors John Ellis, Thomas Bragg and Zebulon Vance, Wooten regularly entertained the high and mighty at his plantation. Before the war, he was one of the executive directors of the Atlantic and North Carolina Railroad Company. 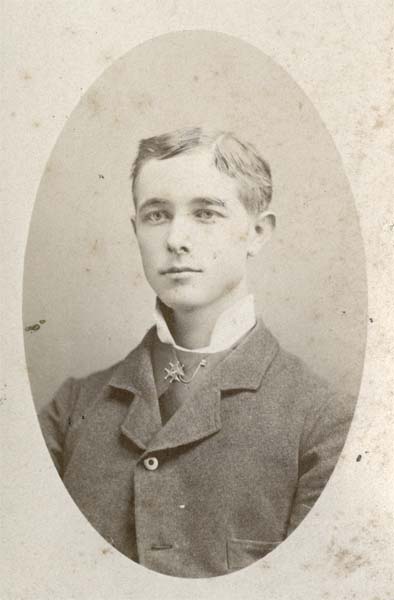 An 1880 portrait of Wooten's grandson James Yadkin Joyner. Joyner's father and mother (Wooten's daughter) moved to Yadkin College to escape the effects of Civil War near home in Lenoir County. Young Joyner was orphaned at 2 and raised by his grandfather. He became a leading educator in the state. (Special Collections, J. Y. Joyner Library, East Carolina University)

During the Civil War in spring 1862, the Wootens and neighboring Joyners abandoned their plantations, relocating, it is believed, near Wilson. After the war, Wooten returned to reclaim part of the plantation. By that time, says Gary Fields, president of the La Grange Historical Society, "The Wooten plantation was shot up and virtually destroyed. The Wootens continued to farm what was left of the plantation and apparently brought it back to life."

Both Council and his son Council Simmons were friends with President Jefferson Davis and served in his Confederacy administration, perhaps in a financial capacity. After the war they were stripped of their citizenship and had to reapply. Gov. William W. Holden, writing on behalf of Wooten to R.J. Powell, agent for North Carolina, said on Sept. 26, 1865, "His exemplary conduct as a loyal citizen of the United States government, his universal liberality to the poor in his section, are attested by them, during and since the rebellion and the unanimous recommendation of his people, including all conditions of Society and every shade of political opinion, are appeals in his favor not to be disregarded." President Andrew Johnson pardoned Wooten three days later.

During the last 10 years of his life, Council Wooten worked at raising his grandson, James Yadkin Joyner, future Superintendent of Public Instruction (1902–1919) and namesake of East Carolina University's Joyner Library.

Chris McAllister teaches history in the Lenoir County public schools and at Wayne Community College. His book on La Grange history is due out this winter.