How to Satisfy a Crawfish Craving 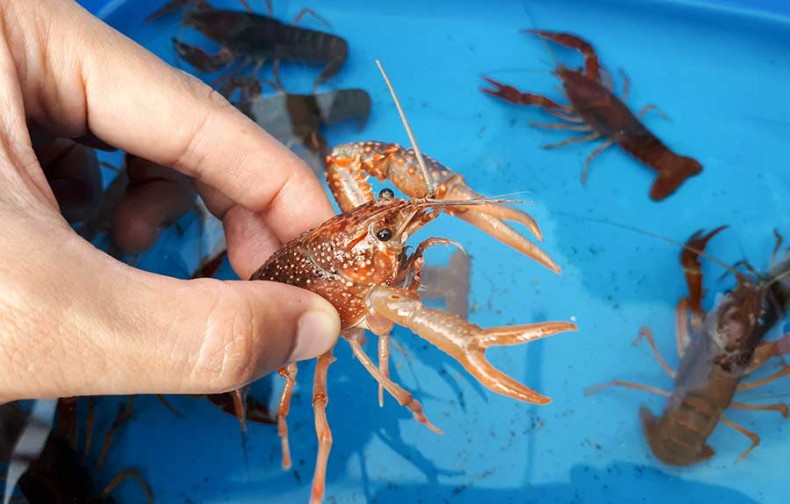 A long-time favorite in Louisiana, crawfish are becoming a popular food in North Carolina. The tiny lobster-look-alikes are second only to catfish in the U.S. aquaculture industry in both acreage and production, and several North Carolina aquaculture farmers are producing crawfish. 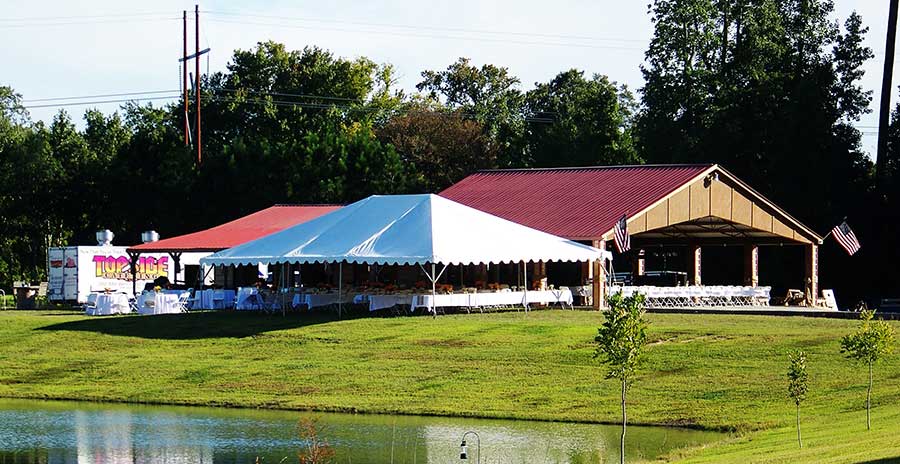 The Hurdles hold their annual crawfish boil at the Crawfish Shack. (Photo by Sheryl Hurdle)

The Hurdles sell all their crawfish live except when they have their annual crawfish boil, a big event they hope one day to morph into a seasonal restaurant. The cooked crustaceans can be intimidating for those unfamiliar with them, so Sheryl explains how to join in at the next crawfish boil:

“You start by twisting off the head, exposing a little of the tail meat. Some people squeeze the head and suck the juices, which is only a combination of fat and seasoning, but tasty. You then ‘hold’ the exposed meat with your teeth and pinch the bottom of the tail while pulling gently with your teeth. The meat comes right out.”

Part of their popularity, in addition to tasting good, is that crawfish are a healthy food high in protein and low in saturated fat and calories. They are also high in omega-3 fatty acids, vitamins A, B6, and B12, biotin and niacin as well as calcium, phosphorus and iron. 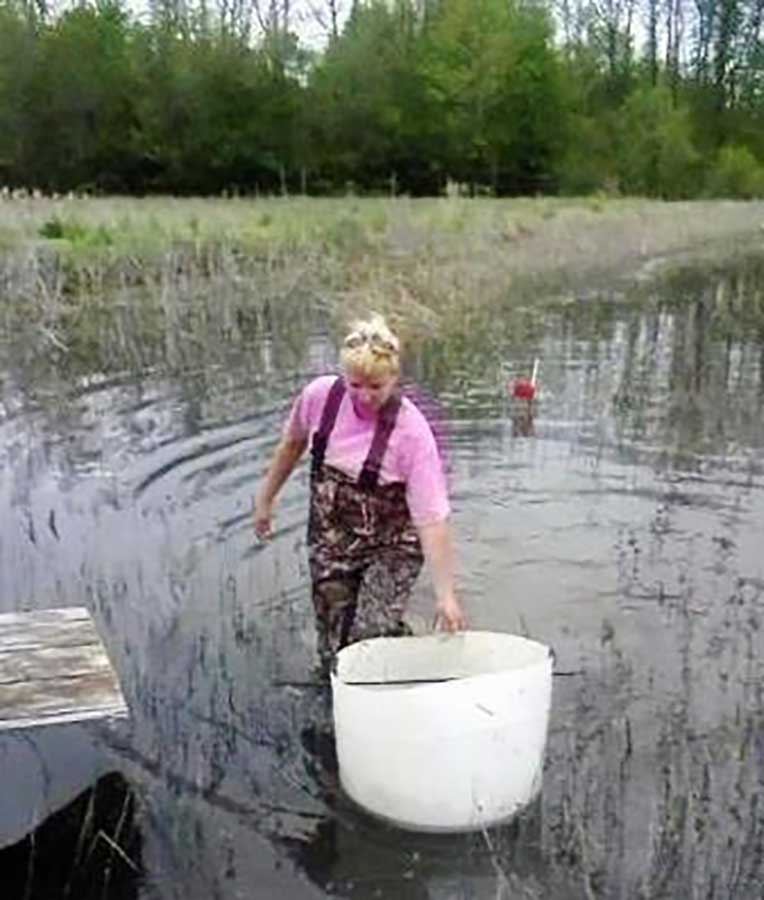 Sheryl Hurdle harvests crawfish from her pond at the Crawfish Shack. (Photo by Sheryl Hurdle)

While you usually find them in the seafood section of the supermarket, crawfish don’t come from the sea. Their natural habitat is fresh water, where they stalk the bottoms of streams, lakes ponds and swamps. The crawfish is a member of the crustacea family (as are their seafaring cousins crab, lobster and shrimp), and North Carolina is home to more than 48 species of crawfish. The females produce young in the spring. She lays hundreds of eggs, which, once they are fertilized, attach themselves to her underside. They hatch as tiny versions of the adult without going through a larval stage. As they grow, they molt or shed their shell.

When the summer gets hot, crawfish burrow into the mud to stay cool, where they elude being trapped. As a result, farmed crawfish are harvested April through June with small wire or plastic traps baited with fish, which resemble small crab traps. Some farmers build the ponds in which they raise crawfish, but some use existing ponds such as beaver ponds.

There are no wholesale buyers of North Carolina-grown crawfish at this time, so much of the crawfish meat sold in supermarkets is imported from China, Canada, Spain and Japan. Cooks who want locally grown crawfish can buy them fresh from farms or sometimes frozen. 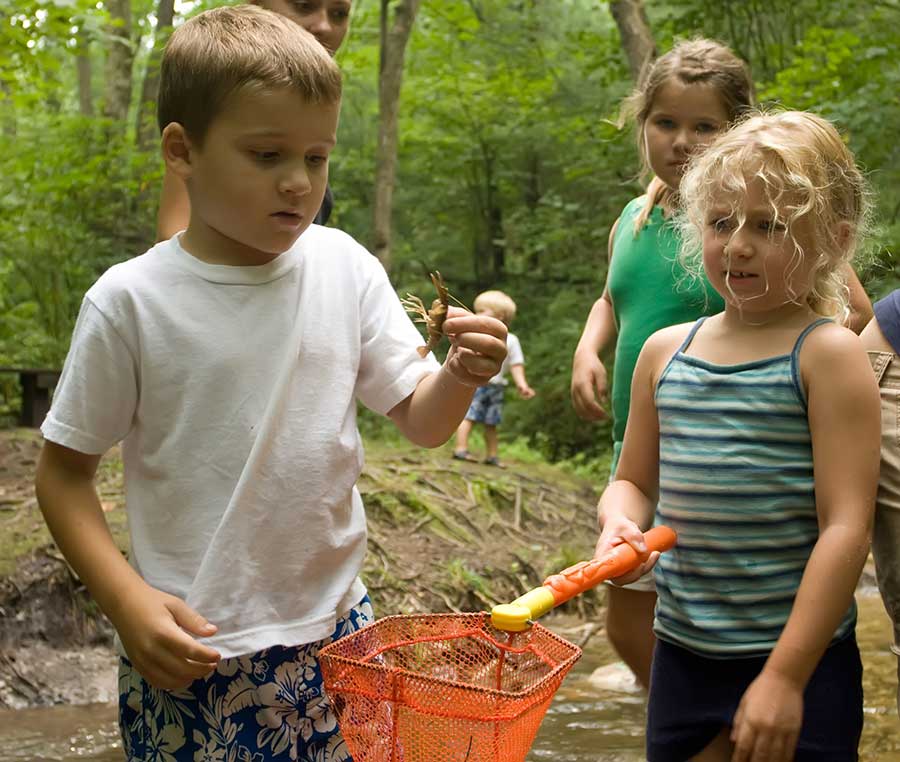 The Hurdles begin harvesting their crawfish in May, typically bringing in the last few in mid-July. After the harvest, the ponds at the Hurdles’ Crawfish Shack are drained and planted with milo as a forage crop to shelter future crawfish. In the first week of November, the Hurdles flood the ponds with two to three feet of water, and the process starts again.

After the crawfish are harvested, they are put onto large purging tables fitted with drains and shower heads. They are constantly showered for 36 hours to rid them of mud and other debris. After this process, they are ready to cook and eat. (Without the purging, the crawfish will taste muddy.) 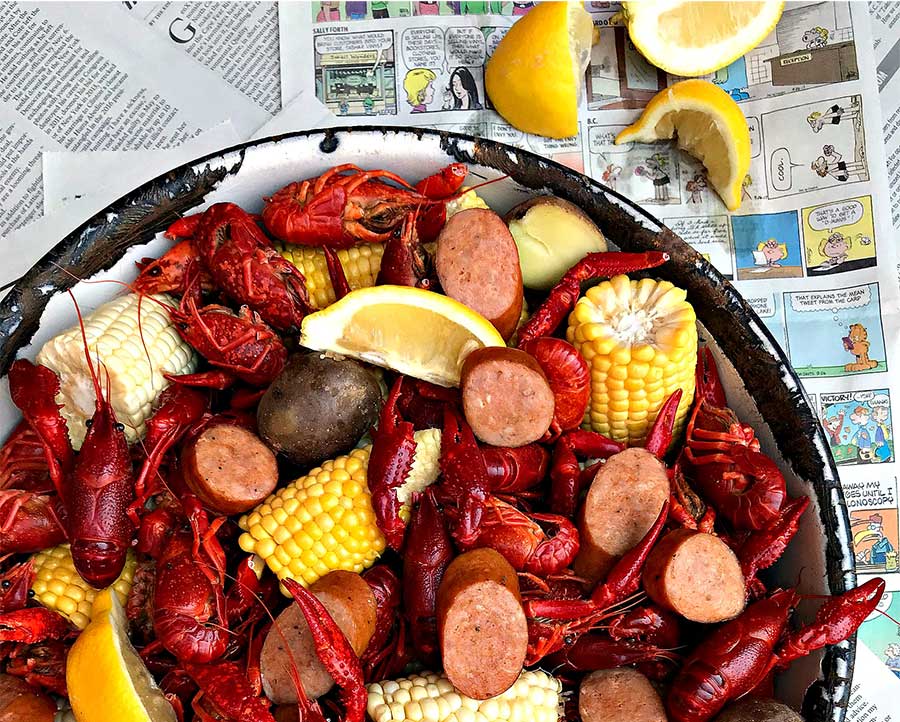 You can easily multiply this Crawfish Boil to feed a crowd. If you haven’t tried eating crawfish yet, you are in for a treat. (Photo by Wendy Perry)

Inspired to make your own crawfish boil or fry up some tails? Find recipes for our Crawfish Boil for Two and Fried Crawfish Tails.

When handling live crawfish, be gentle as they are somewhat fragile. Live crawfish should be kept cool or on ice until cooking. They need air, so don’t put them in a closed cooler. They will stay alive for about 24 hours. Throw away any that are not alive. One old rule of thumb is if the tail of a cooked crawfish is straight (indicating it died before the boil), it isn’t safe to eat. The LSU AgCenter, deep in Louisiana crawfish country, put this to the test and determined other factors — including a crowded pot — can give cooked crawfish straight tails.

Crawfish tail meat should be used or frozen within two days of purchase. Cook frozen crawfish immediately after thawing. Big is not better when choosing crawfish for eating: as they increase in size, the tail (where the meat is) decreases in size.Crawfish can be substituted for shrimp in any recipe. It is the main ingredient in many Cajun dishes including jambalaya, étouffée, gumbo and a crawfish boil — the most popular and traditional way to cook crawfish. This is usually an event, with enough to feed a crowd. But you can make a “little boil” just for two or a small family. We in North Carolina love fried everything, which also works quite well for crawfish tails.

Unlike lobster, which is just called lobster, crawfish go by a whole range of nicknames, mostly based on where you’re from. As a grad student at NC State University, Josh Katz (currently a graphics editor for The New York Times) found that most in the Southeast call them crawfish. Those in Kentucky and parts of the central U.S. tend to use the word crawdads, and those up North call them crayfish. Of course, crawfish are by no means limited to those three names. Don’t be surprised if someone invites you over for a pot of crawdads, crawdaddies, mudbugs, ditch crickets, yabbies, bugs or mudpuppies. Do you have a name for them that didn't make our list? Please comment below!