By Larry and Jerry Prescott 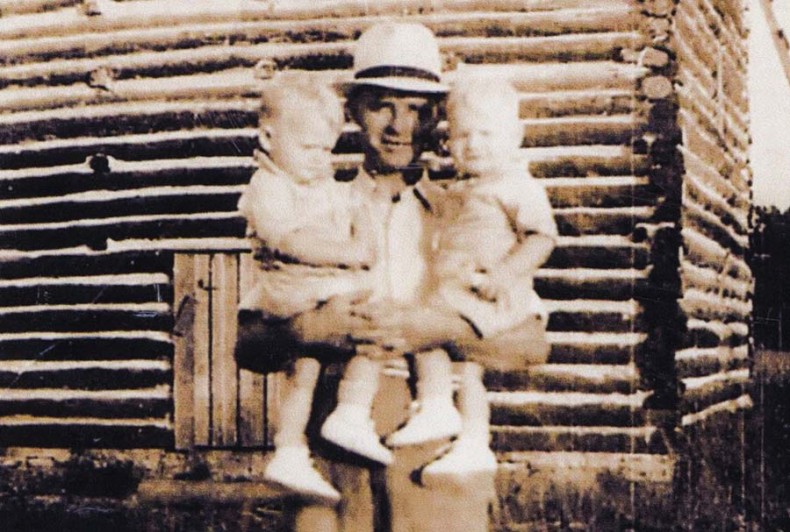 McVernon Prescott, Sr., our dad, holding my twin brother and me in 1941. In the background is the old log barn he built. Many a barn of tobacco was cured in the wood-fired furnace.

On July 27, 1942, Pamlico-Beaufort EMC — a part of what is now Tideland EMC in Pantego — began service with 29 miles of line serving 67 members. The manager was Herbert Harris, Sr.

There was another person who was very much involved with the development of the co-op. He was McVernon Prescott, Sr., our dad.

Dad and Herbert Harris were very good friends. I’m sure that he was contacted early on when the plans were being laid for electrical service in Pamlico County. The reason for this is that Dad was a self-taught electrician and was always a step ahead of the average person during this time. He owned one of the first Fordson tractors built by Henry Ford. Later, he bought a 9N Ford tractor. He owned Model T and Model A automobiles, and he was in tune with the times when new models hit the dealerships. He literally owned several new models of Ford cars and trucks during the 1930s, 40s and 50s.

He continued his pursuit of learning all he could about the future of electricity. He worked for Jack Hammond at Hammond Electric in New Bern while managing the farm part time. His knowledge, skills and interest continued to excel and grow to the point that he developed his own power plant. We grew up referring to a shed attached to the garage and pack house as “the plant house.” It was years later when we discovered exactly what this was. Yes, it was a gas-powered generator he designed. We were too young to remember, but he had at least two light bulbs wired into this power plant in the house. No one else in the neighborhood had anything like this.

So with this being said, Dad became interested and involved with Pamlico-Beaufort EMC from the beginning. He served on an advisory board. Herbert Harris and later Carlos Holton, managers at the central office in Grantsboro, recognized Dad’s skills as an electrician and offered him the job of inspector. This was a part-time job that later became a county government position. He served as inspector for the tri-county area until the day he died in 1976.

I can remember like yesterday when the poles were being erected on Prescott Road by the co-op’s first linemen, Louie Earl Grant, L. Ward Cayton, Roy Golden and Francis Grant. Dad would keep us excited by telling us we would soon have electric lights in every room. And I will never forget the night we had lights in the house. What a thrill.

Us and our older brother rode with Dad when he would go out to inspect a house. We traveled all over Pamlico, Beaufort (Aurora area) and Eastern Craven counties in all those Ford cars. We got to meet a lot of people. There have been several stories shared with us about Dad’s good customer service as the electrical inspector.

One young recently married couple shared with us that just a few days before he died, Dad was inspecting their house and found a ground wire missing on the panel box. He said “Mr. Mack” left and said he would be right back. When he returned, he had a piece of ground wire, installed it, and set the meter in the box and they had power. We have heard other stories like this.

This year is Tideland EMC’s 75th anniversary. Our Dad, McVernon Prescott, Sr., was one of the many early pioneers of bringing electricity into the homes of rural Pamlico County. Another service he provided, free, was tutoring several of the local guys to prepare for the North Carolina Electrical Contractors license exam.

Thanks for allowing us to share this part of our Dad’s life with Carolina Country readers.