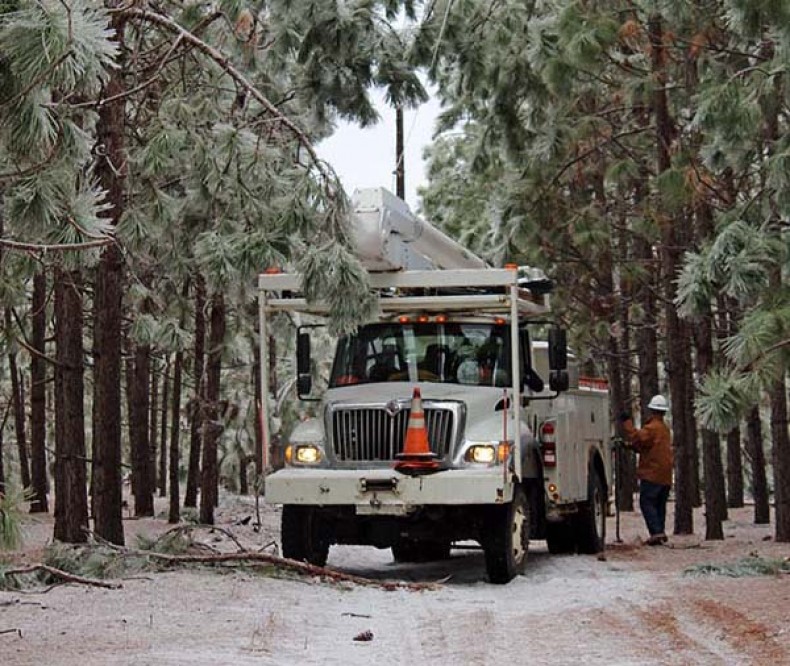 Ice-laden trees leaning onto power lines were often the main culprit for the outages. Central EMC crews work to restore power to members.

After a warm beginning to winter, Mother Nature finally brought freezing precipitation to most of North Carolina in January in the form of Winter Storm Jonas. Snow, sleet and freezing rain began falling in the early morning hours of Friday, Jan. 22, and did not exit the state until late Saturday, Jan. 23. 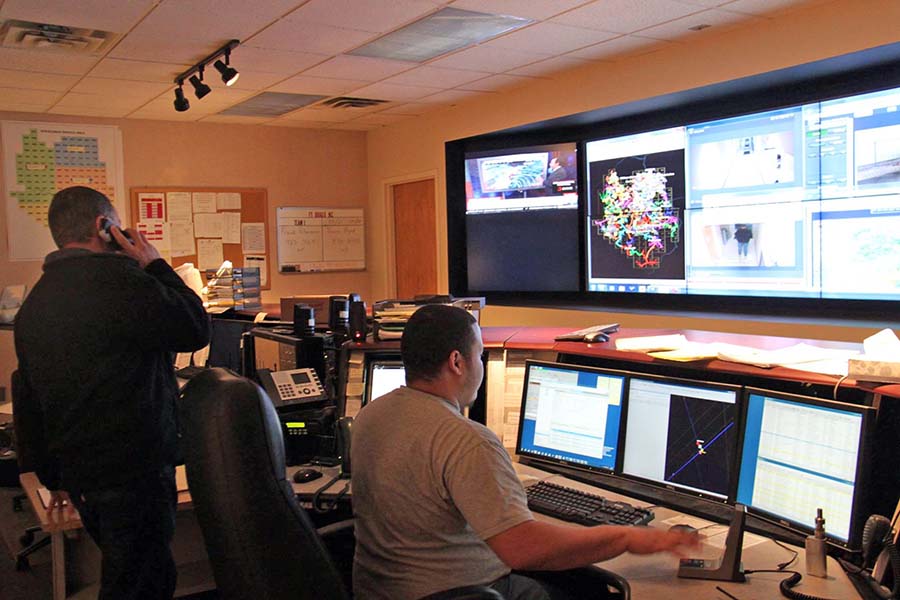 At the storm’s peak, NC Electric Cooperatives reported approximately 25,000 outages. Freezing rain caused the majority of the outages, 16,500, situated in the Sandhills region along the I-95 corridor and near the South Carolina border. Freezing rain, snow and sleet also caused outages in Central N.C. as the storm progressed through the state.

Dangerous road conditions, falling trees and limbs due to ice build up and downed power lines hampered restoration efforts. By 10 p.m. on Friday, Jan. 22, the outage count reached its peak at 25,000. Crews worked through the night to bring the number down to 12,600 by 6 a.m. on Saturday, with all the outages restored by Sunday morning, Jan. 24.

N.C. electric co-ops not affected by outages sent crews to their sister co-ops. The deployment of help is part of a mutual aid agreement shared among the state and nation’s nearly 1,000 electric cooperatives to help one another in times of emergency.

Co-ops reported an “all hands on deck” approach to the restoration efforts, with every department either in the front lines of restoration or providing support for both the line workers and members on a 24-hour basis. 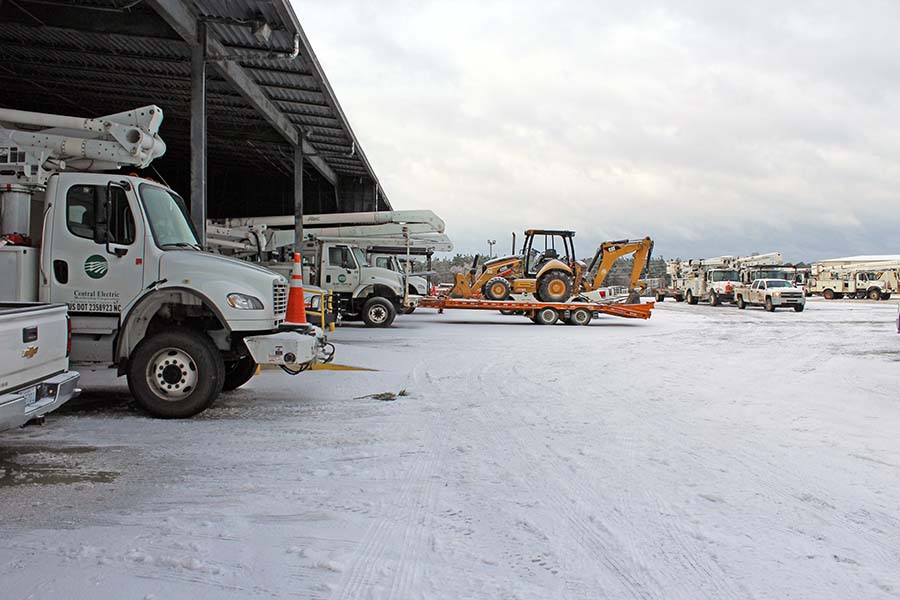 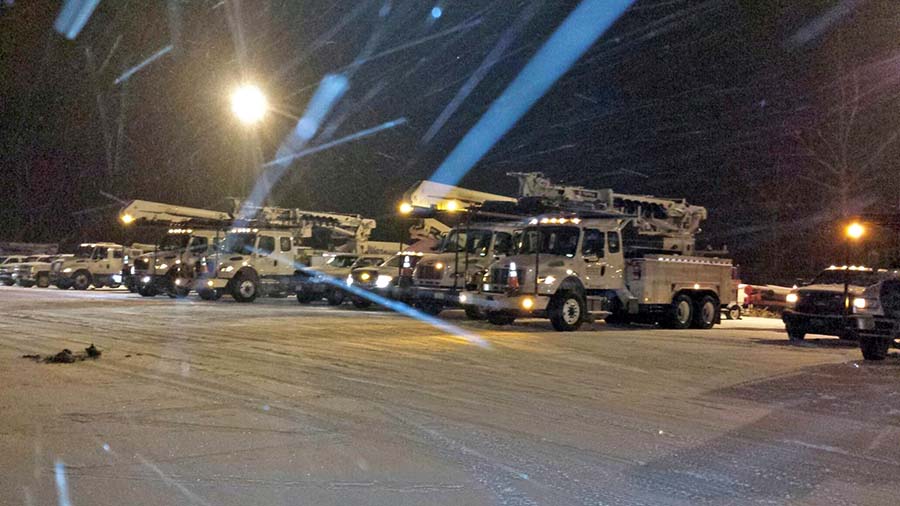 Pee Dee EMC (Wadesboro) had 5,960 members lose power across the co-op’s seven-county territory during the two days. “Our crews had a difficult time reaching poles that needed repairing because of the amount of ice and snow, and then mud, that covered the area,” explained Ashley Ratliff-Haynes, communications specialist for Pee Dee EMC. “Trees and limbs downed by ice caused the biggest problem, with 95 percent of the outages due to trees in some way.”

“When these types of storms happen, it’s great to see the cooperative spirit at work—cooperatives and contractors from across the state banding together to do whatever it takes to get our communities back up and running. And the most important thing is that we were able to do it quickly, but safely, which is always the goal,” said Taylor. 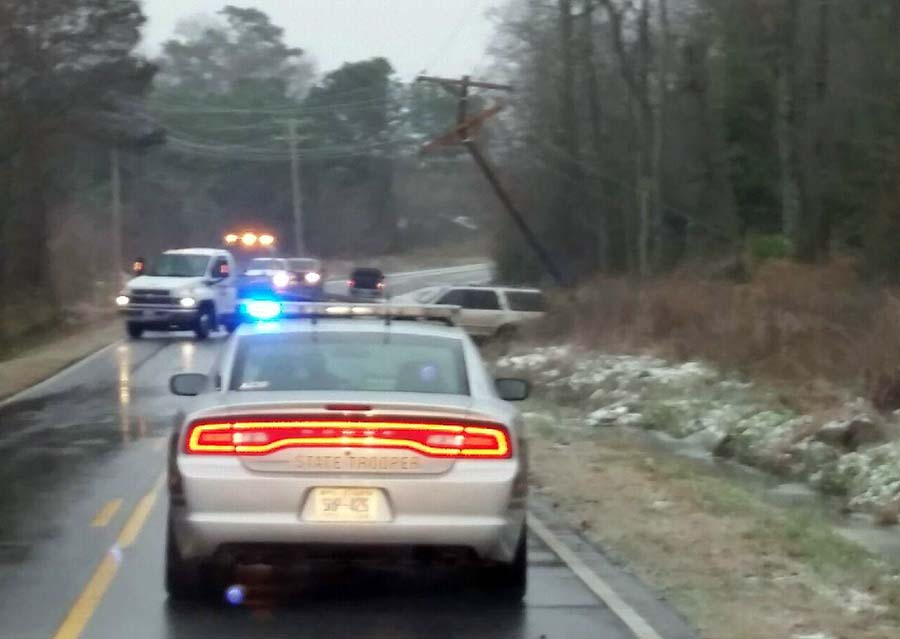 Cooperative members affected by the outage expressed thanks to co-ops and crews via phone calls to customer service as well as social media. At South River EMC (Dunn), approximately 5,000 members faced power outages. Through Facebook, the co-op constantly updated its members on outage locations, and the conditions the crews faced in restoration efforts. Members stayed positive and offered support. Comments included “great response on the outages, hard-working and dedicated employees.” On Lumbee River EMC’s Facebook page, one member thanked the linemen for their efforts, and for risking “your life and property to make sure we citizens are safe and warm.”