Dustin Wilks turned a hobby into a career on the water

Here's a “mini-episode” of "Catching Bass with Dustin Wilks."

I first met Dustin Wilks when he was 16 years old and had a growing reputation as the Raleigh wunderkind of local bass fishing back in the mid-1990s. He knew he wanted to fish for a living, and by the time he was a senior at NC State, he qualified for his first Bassmaster Classic in 1999. He went on to qualify for the biggest tournament in bass fishing six more times in his 12 years on the tournament trail.

I get comments almost weekly from fans saying it is the best fishing show on TV, and that’s what really keeps me wanting to make it better each season...

“I enjoyed my time as a touring tournament fisherman for the most part,” says Dustin, who now lives in Rocky Mount with his wife and two daughters. “I simply love fishing, and tournament fishing was the only way I could figure out how to make a living at it at that time. I got to see all the best lakes in the country, see almost every state, and get to know and make friends with the top professionals in the world — and make a good living at it along the way.

“I actually enjoy driving and seeing everything, but traveling with all my gear was stressful when it came time to stop at hotels,” he continues. “My last four or five years I had a camper, and that was much more comfortable and safer, with less time worrying about someone making off with my tackle.”

Dustin’s last year on the trail was 2012, and he and his wife, Mary, wanted to settle down and start a family, but Dustin still wanted to make a living on the water. After a few years of tweaking, “Catching Bass with Dustin Wilks” has emerged as a popular angling offering on the Sportsman Channel and World Fishing Network. His target audience is bass anglers who want to learn new techniques and baits. 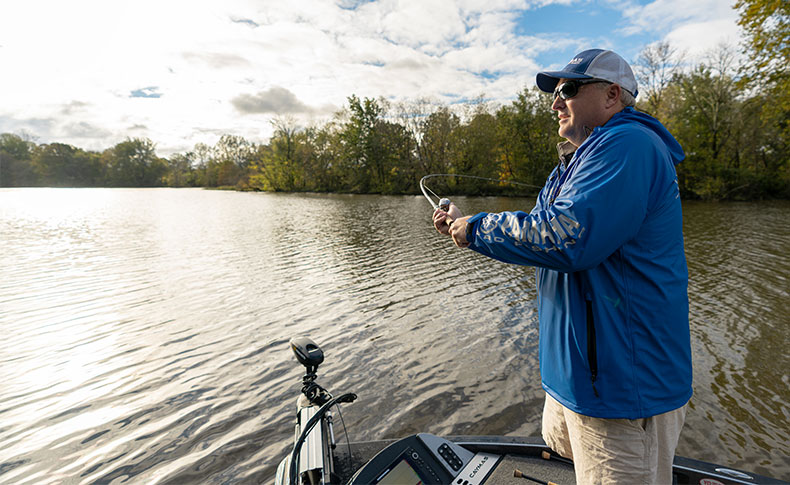 “I get comments almost weekly from fans saying it is the best fishing show on TV, and that’s what really keeps me wanting to make it better each season,” Dustin says. “Part of the winning formula for the show is lots of actions and tips. I try really hard to have a minimum of 20 fish each show, and I’m constantly giving tips the entire time. I’ve trained my cameraman to focus less on me and more on the baits and the fish. He is getting better each year and does a great job.”

Dustin says they always film the show as the day unfolds, and fish with the best lures for the conditions — not forcing any particular product. Each lure used is the best choice for that moment in time.

“So having some of the best fishing companies to work with, I’m confident I have everything in my Caymas boat to have a great day on the water,” he says.

Most of Dustin’s shows are shot here in North Carolina. He usually decides where he’s going the night before, and sometimes the morning of the shoot.

“I love going to new places, and NC has so many lakes and rivers that I can often fish a place or at least an area that I’ve never been to before,” he says. “I’ve filmed all over, from Canada to Florida, but most are filmed here to stay close to the kids.”

One of the “coolest things” Dustin has found about having a fishing show is that it often airs between other shows hosted by anglers he considers “pure legends.”

“This past quarter, my show aired right after ‘Fishing with Roland Martin.’ I mean how cool is that?” he says. “I was just a very young kid when I first started watching him — a dream come true looking back to when I was a kid watching these guys.”