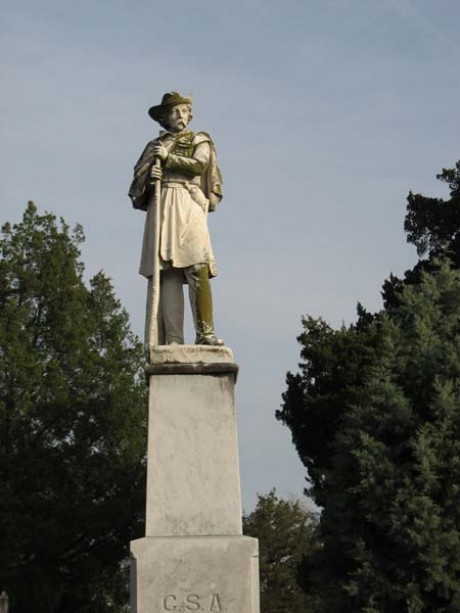 The Southern war for independence was not going well in eastern North Carolina 150 years ago. Thousands of Yankee troops occupied the river towns of Plymouth, Washington and New Bern and the coastal areas of Roanoke Island, Beaufort and Morehead City. North Carolina's fighting men were busy in Virginia and South Carolina, and at Gettysburg where in early July some 14,000 Tar Heels fought and nearly 6,000 died.

In July 1863, the Yankees at New Bern carried out a wild and crazy raid between there and Rocky Mount. The idea was to damage the Wilmington & Weldon Railroad at Rocky Mount, a lifeline for the food and supplies — as well as whatever made it through the Union naval blockade at Wilmington — that eastern North Carolina sent to Confederate forces in Virginia and points north. When you see the railroad today anywhere from Wilmington through Burgaw, Mount Olive, Goldsboro, Wilson, Rocky Mount, Enfield, Halifax and Weldon, think of it as vital to the state's survival during the Civil War.

The forces of Union Brig. Gen. Edward E. Potter's Raid comprised some 800 men, mostly on horses, some on foot--including both black and white North Carolinians who joined the campaign — soldiers, guides, medics, cooks, news reporters and pack animals carrying four cannons, supplies and ammunition. Following a route that would take us five hours to drive today, they traveled maybe 250 miles all together over six days and five nights, slept maybe 10 hours, and left utter wreckage and ill will in their wake. Only six Yankees died during the raid, some 70 were wounded or captured or went missing, and they brought back about 100 prisoners, 300 escaping slaves and lots of stolen goods and money. It happened after a heavy rain, so it was wet and beastly hot, and the rivers and creeks were high. They surely reeked of smoke and alcohol as they burned and looted everything they could.

Wilmington writer David A. Norris in 2007 published the most complete description of Potter's Raid. What we'll do here is cover the route as it looks today, imagining what it was like 150 years ago. You could take this adventure over a weekend, depending how long you visit the area. Because they faced Rebel attacks anywhere along the way, Potter's men were in a hurry.

To start in New Bern on a Saturday morning as they did, you can spend the previous night and get breakfast in the historic district. Then look at Fort Totten, a city park between Broad St. and Trent Blvd., where the men assembled at dawn, Saturday, July 18. Nearby is the 27-acre New Bern Battlefield Park (where the city fell in March 1862) and the historic Cedar Grove Cemetery with its old gravesites, including a vault containing 70 Confederate soldiers.

Moving their equipment and horses onto flatboats, it took Potter six hours to get across the Neuse River just north of the city. By noon, they headed toward Swift Creek Village (later named Vanceboro, for the Civil War governor) where advance troops had prepared a camp. To get here today, cross the Neuse on Hwy. 43 and pass the Street's Ferry marker noting where Potter's men crossed on their way back to New Bern. It's quiet, pretty country now. In Vanceboro, where there's Main Street Sweets and a pizza place, the Raiders spent the night unmolested, except for some locals who shot at them and fled.

It took them 10 hours on Sunday, July 19, to go 25 miles to Greenville. On the way they beat up on some "Local Defense Troops" at Black Jack near today's Free Will Baptist Church. Reach it from Hwy. 43 north, going right on Blackjack-Simpson Rd. (just north of the Hwy. 102 intersection).

Back then, Greenville was confined to today's uptown area around the courthouse, Evans St., 3rd St, and the College View Historic District. They described the town as you would today: genteel and well-kept. The only troops they saw were in the hospital (forerunner to today's super medical complex). They shook down anyone who looked like they had money, ripped jewelry off women's bodies, liberated slaves from the jail. As today, they found "some very pretty ladies" who had "secession stamped on every feature," and visited saloons where they "made ourselves intimate with the interior arrangements." By 5 p.m., they staggered out of there with lots of money, silver, gold, brandy and other booty. A Confederate later said the raiders "defaced and disfigured" places where "merry throngs of pleasure were wont to repair at eventide" (forerunner of the merry throngs who gather after ECU football games).

This would be a good place to spend the rest of the day and night, becoming intimate with the fine cafes, galleries, shops and museums, the Civil War-era Skimmer-Moye House & Grounds. Also, East Carolina University is here. In summer, the town has concerts at the amphitheater on the Town Common. River Park North is a great 324-acre natural area on the north bank of the Tar River. And the Green Mill Run Greenway is a pleasant 3.5-mile trail that takes you into neighborhoods, the university and scenic areas. 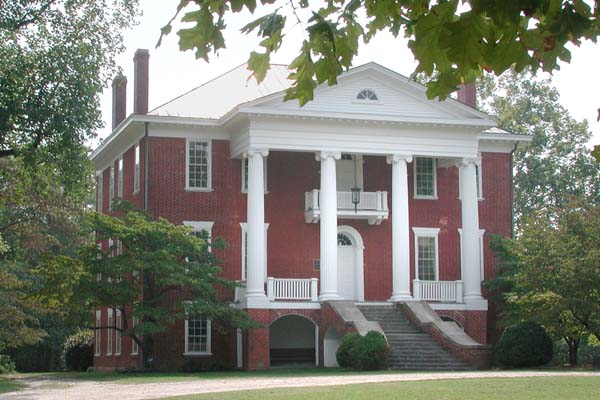 During that July 19 Sunday night, Potter's men, hungover or not, made their way north through Falkland, waking people and ransacking as they went. Today, on and off Hwy. 43, are fine old places that could have been raided 150 years ago. Around midnight, they reached Sparta community (Old Sparta today, near where Hwy. 42 meets Hwy. 33) to cross the Tar and get a few hours rest.

At 4 a.m., July 20, Potter sent maybe half his men and a cannon to Rocky Mount to do the deed on the W&W Railroad. They arrived about 8:30 a.m. and did major damage over the next two hours, beginning at the train depot (same area as today's magnificently restored station) which they burned along with nearby buildings. They interrupted and captured Rebel soldiers at breakfast in the hotel. They moved north and burned the Tar River railroad bridge, then set fire to the massive Rocky Mount Mills (cotton), a flour mill, warehouses, stables, stores, railroad cars, and 37 loaded army wagons. Some broke into houses and stole everything they could carry.

The buildings around Rocky Mount Mills today sit quietly awaiting what could be a major historic preservation project (www.rockymountmills.com). Nearby is the well-maintained Battle Park (named for the mill's founding family) and the circa 1830 Stonewall Manor. A 3.9-mile Tar River Trail takes you along this proud section of the city. It culminates on one end at Sunset Park (many activities), passes by the once-burned railroad bridge and goes to the Martin Luther King Jr. Park. Rev. King himself spoke at the nearby gym 99 years after the raid.

Rocky Mount has come a long way. Confusing as it can be finding your way around, it's worth checking out the Imperial Centre for Arts and Science, the Sports Complex and Highway Diner. 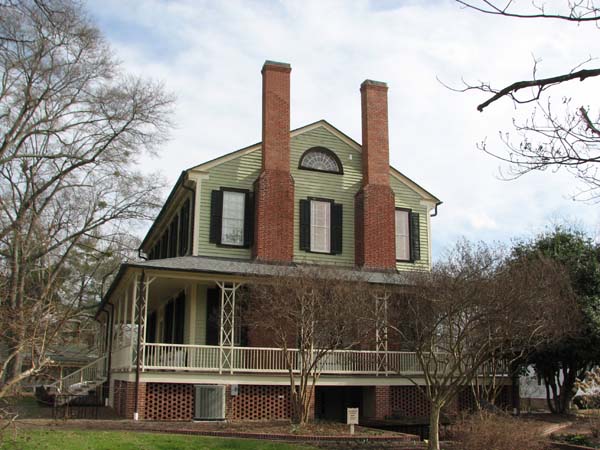 During the July 20 terror in Rocky Mount, Potter's other contingent that morning terrorized Tarboro, a wealthy town surrounded by productive plantations. They galloped in on West Wilson St. and immediately destroyed many of the places around the town's elegant Town Common, including cotton warehouses, railroad cars and a partially-built ironclad gunboat. "These fiends and hyenas" pillaged the Masonic Hall, banks and houses, including that of Henry T. Clark, a recent governor. Confederate forces from Fort Branch at Hamilton surprised the Yankees later in the day just east of Tarboro at Daniel's Schoolhouse (now under I-64), where a two-hour hellfire battle left six bluecoats killed and 18 captured before the rest fled. The Rocky Mount detachment showed up soon, set some fires of their own and moved out.

Tarboro soon returned to its civilized ways. You can see the town's pride in the self-guided tour of its remarkable historic district, including the impressive Blount-Bridgers House and art gallery, Pender museum and the old churchyard cemeteries. A good place to eat is the Classic Diner on E. Pitt St.

The ambush at Daniel's Schoolhouse sparked in Potter's men a desire to get back to New Bern right away. Rebels from Kinston and elsewhere chased and stung them most of the way. Their local guides took them — and their equipment and a swelling following of slaves riding on stolen mules, wagons and carriages — on back roads, through farms and across small bridges. Some 150 Confederate soldiers ambushed them at Otter Creek Bridge near Falkland, but a local black man directed them to another crossing at a ford. At dawn July 21, they refreshed their horses at Grimsley's Church north of Snow Hill. Grimsley was (or quickly became) a Union sympathizer whose Greene County plantation house still stands on Hwy. 13 near where Hwy. 903 heads east to Maury. They rode down through Hookerton where Rebels shot at them and burned the bridge over Big Contentnea Creek. So the Yanks turned east and reached Scuffleton (west of Ayden) toward evening, where they again skirmished with Rebels but crossed Little Contentnea Creek.

"Potter's Raid: The Union Cavalry's Boldest Expedition in Eastern North Carolina," by David A. Norris, 2007. Available in paperback from sellers at www.amazon.com.

At dawn July 22 in southern Pitt County near Grifton, Confederate infantrymen scattered the tired, sizable party of "contraband" slaves who lagged behind Potter's Raiders. The Rebels were further delayed when they paused to gather up booty Potter's men had strewn in the road. Meanwhile Potter's cavalcade went through Vanceboro, then reached the Neuse at Street's Ferry where they again fought off attackers. By midnight, Federal gunboats from New Bern arrived at Street's Ferry and the Rebels withdrew. By 7 a.m., July 23, Potter began crossing to New Bern and safety.

Following their return route today takes you through peaceful, beautiful countryside. You can visit the serene towns of Farmville and Snow Hill. You can imagine the majesty of the 1863 plantations in this area, but it's harder to fathom the fear among the families and slaves who cultivated them as they faced the marauding terrorists of Potter's Raid. While the Yankees destroyed major parts of this civilization in the space of six days—and severely handicapped the Confederate war effort here — the W&W railroad was repaired about a week later, and the war dragged on nearly two more years.