Sting fire ants before they sting you 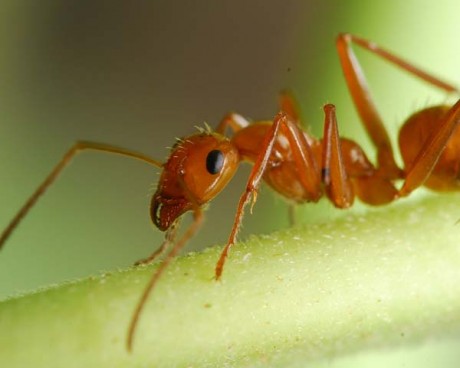 Because of mild winter weather, more fire ants than usual survived to grow their colonies this spring and summer.

"Our family was enjoying a cookout on the patio while our three-year-old played in the yard," says one grandfather. "Suddenly she began screaming and dancing in place. My first thought was a snake bite, but she was standing squarely on a fire ant mound. Ants were stinging between her toes and running up her ankles. For days afterward she had large, red, itchy bumps which finally required a trip to the doctor."

Red imported fire ants are more than pests creating large mounds in your yard. Fire ants can deliver a painful bite, but they actually sting, releasing venom that can create the same allergic reaction as a bee sting. Accidentally disturbing a nest quickly dispatches an aggressive, well-armed attack force prepared to defend the colony and its queen.

There are, however, steps you can take to control the damage to your property and reduce the danger to your children, pets and livestock.

According to N.C. State University Extension associate professor Mike Waldvogel, this year's milder winter was a boon for North Carolina's fire ants. Fewer colonies died out overall, and new mounds are popping up all over.

"It isn't practical to eradicate the ants," says Waldvogel. "In fact, it's nearly impossible. Using methods both chemical and non-chemical is the best way to control fire ants."

"Ants spread from migrating from large colonies into smaller ones several feet away," explains Waldvogel. They are also spread through landscaping material such as infested soil, plantings, and hay and wheat straw.

Start by controlling their food source. "Like my college students, fire ants enjoy greasy foods, so make sure that any outside garbage containers are bagged, well-covered and stored away from the house."

Waldvogel recommends treating individual mounds with a drenching method because it's faster, uses less insecticide, and is better for the environment. In spring, treat the mounds mid-day when the ants are higher in the nest. In the heat of summer, the best time to treat is in the early part of the morning and later in the afternoon.

Using a shovel dusted well with talcum powder (to reduce the chance that the ants will climb the shovel), thrust deeply into the mound to open it, and drench the nest with pesticide. If you would rather skip the chemicals, open up the mound and spread the ants and the soil away from the nest. The key is to kill the queen.

Another method, although slower, uses bait specifically designed for fire ants. Sprinkle the bait around the perimeter of the mound to attract the ants to the tasty poison. Waldvogel recommends buying only the amount of bait you can use in a single season. Hot storage areas can cause the oily base to become rancid and less attractive to the ants. Using bait around children and pets requires special care. Always read and follow the directions for using any pesticide.

Other killing methods, such as using gasoline to burn out the mound, are dangerous and harmful to your lawn and the environment. "Some people tell me that their method is to sprinkle grits or flour on the mound. This is actually totally ineffective," says Waldvogel.

If you are stung, physicians recommend cool compresses and oral antihistamines to control the itch. To avoid infection, keep the area clean and don't scratch or "pop" the pustules. Hydrocortisone creams can control inflammation at the site.

The best way to avoid the pain and itch is to avoid fire ants altogether. Take measures to control and eliminate fire ant colonies, watch your step, and enjoy your yard and garden safely.