The U.S. Army relies on the mule to go where other pack animals cannot go. But the mule must want to go there, too. 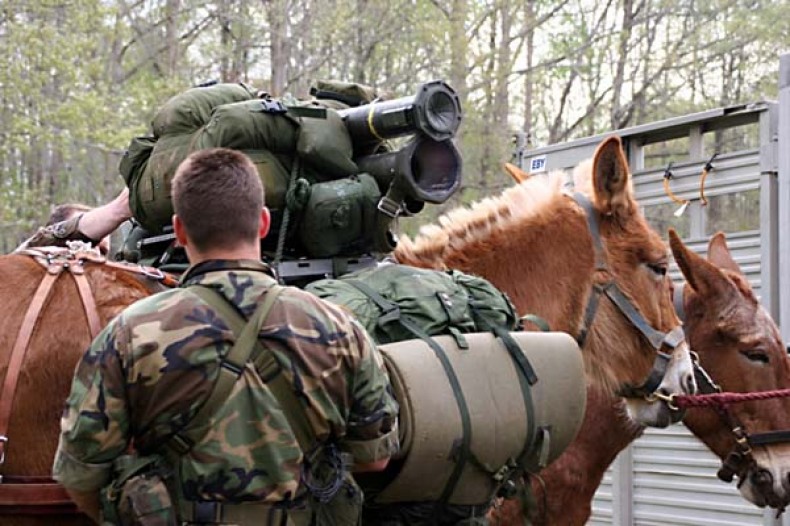 You might be as surprised to learn that in this modern age mules are still employed by our military. Even with the available high-tech equipment it turns out there are some places in the world that are only accessible on foot — make that on four hooves. Mules were used extensively during World Wars I and II. The last two mule units were officially deactivated in 1957. Mules were put back into service in 1994 in Haiti and have been used in Afghanistan since 2001. The hardy hybrids are used in those and other locations to pack in equipment and soldiers to places otherwise inaccessible. 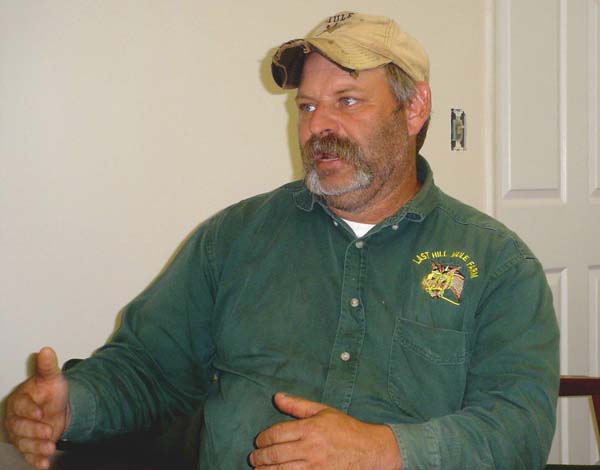 Since few 21st-century soldiers have prior experience working with pack animals, they have to learn some muleskinning skills. Muleskinning is the old-time title given to mule trainers. Special Forces soldiers receive that training right here in North Carolina under instruction by Kenneth Tyndall, aka "Mule Man of Hoke County," a local muleskinner. The title of muleskinner simply means he trains and handles mules; no actual skinning is involved. Kenny has been training mules for about 25 years. He has been teaching Special Forces soldiers those skills for the past 15 years.

In 2004 the U.S. Army's John F. Kennedy Special Warfare Center and School at Fort Bragg issued a 225-page field manual titled "Special Forces Use of Pack Animals." The manual covers selection, care and training of the mule and other pack animals. It describes mules as intelligent, agile and having great stamina. It also credits the mule as being more sure-footed than a horse in rugged terrain. The description goes on to say, "Mules are intelligent and possess a strong sense of self-preservation. A packer cannot make a mule do something if the mule thinks it will get hurt, no matter how much persuasion is used. Therefore many people confuse this trait with stubbornness."

The mind of a mule

I asked Tyndell what a soldier does when a mule refuses to do something. He gave an example and a three-step solution.

"Say you ride up to a dark shadow and the mule is skittish about stepping onto it. Let them sit and just think about it a while, then ask again. You can't force a mule to do anything. If it still doesn't want to step on that shadow, walk around in a circle and come back to it. If that doesn't work you'll need another mule, a leader, and your mule will go and follow it."

Mules are chosen over horses and other pack animals because they are hardier and more sure-footed, taking those attributes from the donkey half of this hybrid equine. Mules are the offspring of a female horse (mare) with a male donkey (Jack).

U. S. Army Special Forces soldiers are trained to use whatever is available in whatever places they find themselves in order to get their job done. Mules, and sometimes donkeys, are readily available in many Middle Eastern countries where they are still used as beasts of burden and transportation.

Tyndall explains that mules are half as easy to keep up as a horse and will do their work on half the food. This makes them well suited and economical for transporting equipment and soldiers in countries like Afghanistan. The mules are acquired on location rather than shipped in as they were during the World Wars. The Army buys the animals from locals with the hope of finding well broke mules or donkeys. Tyndell grins and says it doesn't always happen that the animals are broke at all. That's where the mule-training instruction comes in very handy. The soldier may have to break the mule to pack and ride before he can use it.

With that in mind, one lesson Tyndall says he teaches his soldiers is, "Never pack anything on your mule that you have to have — like your weapon." He laughed and explained that you cannot count on your mule staying put, and when he takes off all the gear in his pack is going to go with him. Tyndell teaches the soldiers that they need to carry all essentials for a day or two on themselves such as their weapons, decoder, medical supplies and a day's supply of food.

"We always lose a mule, but they always come back," he said. "Sometimes the soldiers who come back from the country where they were stationed will tell me the mules they bought in a town ran away and they could never find them."

Role-playing between mock civilians and soldiers teaches the soldiers to interact with the native people of real countries where they will later be stationed. They learn local customs, how to barter and how to train local recruits.

Mule Man's work schedule leaves him plenty of time to enjoy his passion for mules and the outdoors. The training sessions last 14 days, and he is off 30 days between sessions. On those off days he thinks nothing of packing up and hitting the trail for days at a time with his own mules. Tyndall designed and built a unique wagon, a mule-driven motor home complete with a potbelly woodstove for warmth on chilly nights. His Facebook friends are invited to come along with messages like, "Come ridin' in the sandbox the weekend. Who's in?" To answer one, apparently new, friend, he explains the sandbox consists of 80,000 acres of the Sandhill Gameland in North Carolina's southern coastal plain, which offers over 1,000 miles of dirt roads, ideal for riding and driving mules and horses. Accompanied by his dog, Rimshot, Mule Man believes, "If you can't get there with mules, stay home."

Donna Campbell Smith is a Carolina Country contributing writer and author of “The Book of Mules: Selecting, Breeding, and Caring for Equine Hybrids” (Lyons Press 2009). She lives in Franklinton.