9 reasons to appreciate the white-tailed deer 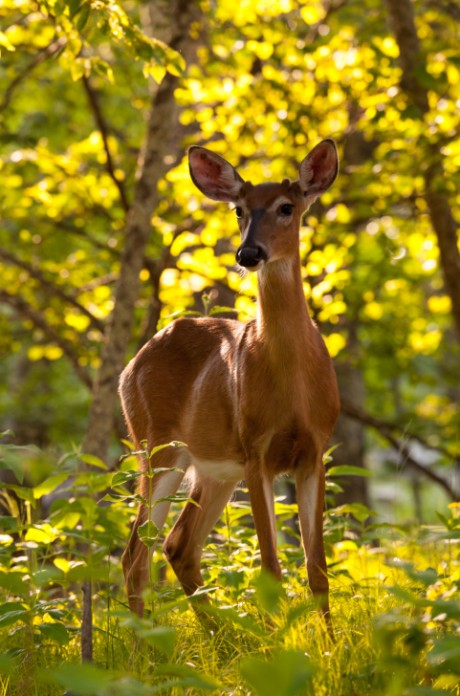 How is it that some people enjoy the thrill of seeing scores of deer while others see only a few?

A few facts and your common sense can open one of nature's doors for you. And no, you don't have to hike through the thick forest to find a fawn. First clue: deer are mainly forest edge dwellers. Some people call a deer "Odocoileus virginianus," but only those who know him well.

1 Stand still
Deer pay almost no attention to anything stationary — including a person — so if you're the reason the deer ran, just stand still. It'll probably circle back around to where it was. An alarmed deer doesn't run far.

2 How big are they?
Just how big is a white-tailed deer, anyway? The buck may weigh an average of 150 pounds, he's about five to six feet long, but is only three to three and a half feet tall at the shoulder. The doe is about the same height but weighs around 50 pounds less.

3 Feeding & time of day
An hour or so before sunset, whitetail deer come out of the woods to feed in fields. They return to the forest about two hours after sunrise.

On heavily overcast days you may find them feeding in fields anytime during the day. However, strong winds and thunderstorms drive them deep into the woods.

White-tailed deer consume 10 to 12 pounds of food every day. They will eat almost any vegetation: clover, grass, apples, acorns, trees (yes, trees). If food is plentiful, they need only about a square mile for their dining room.

4 Good senses
Deer are color-blind. They have keen eyesight and watch for the slightest movement. They also have an amazing sense of smell and their hearing is good.

5 Your rolling blind
Most wildlife can be observed closely from a "blind," and you already own one: your car. Deer in parks will allow you to drive very close to them.

When on foot keep a low profile, stay downwind and behind cover. Deer feed facing into the wind, so approach them from behind or the side.

How close is too close? Fifty yards is close enough. If an animal alters what it is doing, then you are too close no matter how far away you are.

6 High-tailing it
A white-tailed deer can clear an eight-foot obstacle from a standing start. A 15-foot broad jump is nothing unusual. I've seen startled deer run and jump six feet off the ground with their legs stretched straight out from their body. They will "hightail it" away at 30 to 35 miles per hour.

7 Daytime is naptime
Deer go to daybeds to rest and chew their cuds just like a cow. Day beds are ordinarily on ridges where the rising air currents carry early warning signs of danger up the ridge.

Tracks of the white-tailed deer are narrow and sharply pointed. Three-inch-long tracks may belong to either an adult doe or buck.

Deer trails are formed by the animals' constant movement from food to rest areas. A concealed location along one of these is a good site to watch for deer.

If it looks as though someone has ripped small branches from bushes and even briers, it's a good sign that deer have been browsing. They have no upper incisors and must bite the bush and pull up by lifting their heads, ripping the food free.

8 Longevity
Deer may live to the ripe old age of 10. Most bucks, however, are lucky if they make it to four or five years of age. Doe live a little longer since most states usually restrict hunting doe.

Park deer are subject to another danger: eating junk food. A deer can digest grass, tree roots, acorns and apples, but not junk food. Highly processed junk and snack food can form an indigestible ball in the stomach that can slowly kill a deer.

Humans are the biggest threat. Hunting and collisions with vehicles kill most white-tailed deer. Watch for them along the road especially at dusk and dawn. When one crosses the road, slow down and wait a moment, another most likely will follow. Maybe it will be a fawn. 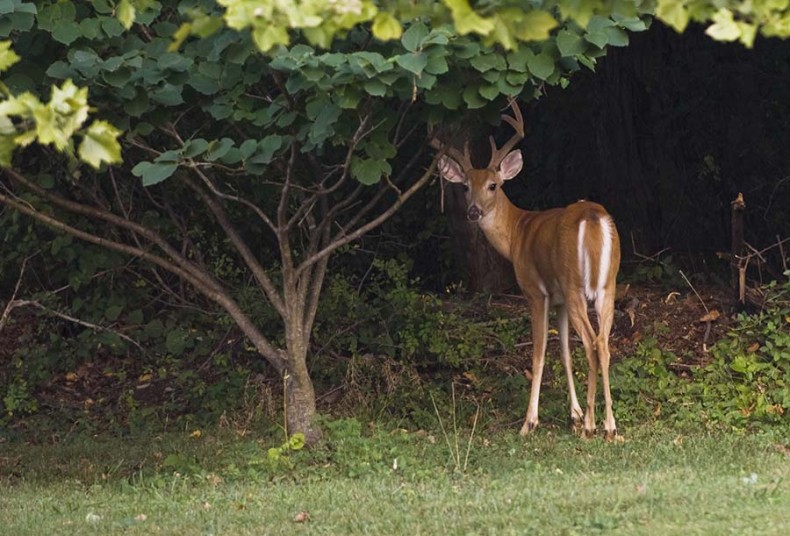 Spring and summer, birth and young

Fawns are born in late May or June. In June, you may see a doe with her fawn. It weighs around five pounds at birth. The doe leads her newborn to a safe site and then moves about 100 yards away. She is far enough away to not draw attention to her baby, but close enough to keep an eye on it. The fawn's spots make it nearly invisible in the leaves. A fawn can walk, sort-of, 10 minutes after birth. A month-old fawn can outrun a person.

A buck's antlers are full size by September. He rubs them on trees and bushes to scrape off the covering of velvet. These "buck rubs" are along deer trails and roads or anywhere else he feels like making one.

The majestic buck, head held high supporting magnificent antlers, prances through the fall fields and forest, challenging any who dare step in his way. Fall is rutting or mating season, and a buck may charge at anything — definitely time to watch from your rolling blind.

Winter wanders in, travelers wander away and the deer wonder about their next meal. White-tailed deer, year-round residents of their range, munch on bark and twigs in winter.

Now, go to a park. Bet you will be the one that sees a lot of deer. Happy (deer) trails to you.

Writer and photographer Knolan Benfield grew up in the Blue Ridge Mountains and lives in Morganton. He is a member of Rutherford EMC. Learn more at KnolanBenfieldPhotography.com