No matter how much you love something or someone, there comes a releasing time. 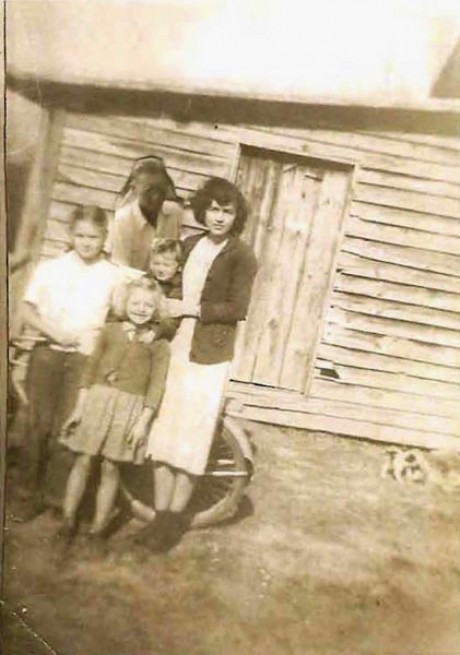 Our family in 1949 in front of my Granddaddy Coleman Brogden’s home. He lived close by us in the Creedmoor area. Daddy and Mama are with our brother Buck, my younger sister Monk and me, all standing in front of the bicycle.

Change is difficult, especially for children, but I was almost used to it. When I was a child, my daddy, Raymond Oakley, would travel to wherever he was hired to cure tobacco on large farms, as some men did trying to take care of their families. We were tenant tobacco farmers. Each year until about the time I entered high school, we moved to a different farm about Christmastime.

In Granville County, as a family of five, we farmed and faced lean years when there was no car and no money for frivolity. A two-horse wagon and our legs provided our transportation. Before tractors and electricity were widely used, before farmers gave up nighttime work for the comforts of home and the flicker of television sets, we found our entertainment in various simple ways.

It was 1949, and I was in the fifth grade at Creedmoor High School. Tobacco was cured in an old log barn where the sticky green leaves were strung up on sticks and dried by burning hardwood night and day. Daddy sometimes would allow me, along with my sister Margaret ("Monk") and brother Archie ("Buck"), to spend the night at the curing barns where he'd wake up to check on the temperature and stoke the fire in the wood-burning flues. We listened as summer's cicadas sang under a pale moon on into the night. We thought it was exciting to sleep on the table used to string tobacco, wrapped in one of the patchwork quilts made by my mama, Prudie Brogden Oakley.

One day early in the year, Daddy was cutting down trees that he would later split with a maul and wedge, then burn in the barn flues. He spotted a crow's nest in a tall pine tree that he had chopped down. The nest had in it a young crow whose head feathers were not yet glossy, but more fluffy. It was just a baby. Young crows usually remain with their parents until they can find a home of their own, and this one had no family that we could see. But he had found a home.

Daddy kept his wings clipped, and our whole family loved Blackie. He would eat grain, earthworms, insects, seeds, fruit and bird eggs. Daddy fed Blackie small chunks of liver once in a while.

Soon Blackie was my constant companion, playing and working on the farm. He rode the handle bars of my shiny, maroon bicycle as Monk and I pedaled just short of a mile to the neighborhood store where we'd meet the school bus. Blackie would return home alone. In the afternoon, he'd be at the store, and we'd ride home together. I sometimes wondered how he could tell the time. With Blackie perched on the polished chrome bars of my bike, my head thrown back and the wind racing through my long hair, we sped along, skimming happily down the road. Once, Mr. Yeargin, the store owner, said to Daddy, "There's a crow that keeps flying around my store. I got my gun to shoot at him." Well, Daddy didn't like that, and in a no-nonsense manner replied, "You'd better not shoot that crow! He's my children's pet."

When work time came, Blackie joined our family in the fields. I thought that worming tobacco was disgusting, but Blackie would wander up and down the rows of plants plucking off the hornworms that ate large holes in the tobacco leaves. I tried but couldn't bring myself to take off the nasty worms and crush their heads like my family did. So I used an old pair of scissors to snip off the head while the worm was still on the leaf. At harvest time, I drove a harnessed mule to the barn, hitched to slides that carried primed, green leaves of tobacco for stringing on the sticks. Blackie rode on my shoulder or bummed a ride on the back of the slide.

Around about this time, Mama started missing items from her kitchen. She especially missed her good scissors. It turned out that when Blackie saw the opportunity, he'd hop into the house, select an object and fly to a hollow in a huge oak tree at our back door. When my parents realized what was happening, Daddy climbed a ladder and retrieved Blackie's stock of hoarded goods, including silverware and Mama's scissors. It seemed that gleaming items caught his sharp eye.

The stable that housed the work mules was down the path from our house. Sitting in the loft of the stable with the end door open, Blackie would look out with piercing eyes watching for Mama's hens to lay fresh eggs in their nests. He would then perch on the small ladder the hens used to walk up to their nests. Daddy would say, "He can pop his bill in an egg and suck it out before you know it!"

That summer he sometimes became frightened by the loud noise of discharging dynamite set off by men building a huge pond on the farm. He didn't have a companion crow to watch out for him as crows often have. A watch crow will fly out and keep a keen eye focused to warn others of danger.

As the long days of summer came to a close, the tobacco crop was sold at the warehouse in town, and the corn was pulled and stored in the corncrib to feed the animals. Winter was on the way. We noticed that Blackie would stay away from the house for extended periods of time. Daddy had ceased clipping his wings. He said one day, "The other crows sit in the trees close to the stable and call out to him." And we also heard Blackie's common call, a harsh "caw," in answer. Daddy eventually said, "We won't hold him any longer. We'll let him go free."

Sad as we were, our hearts knew it was the right thing to do. "Blackie wouldn't have gone if he hadn't wanted to," Daddy told us. "Let him do as he pleases."

I began to understand that no matter how much you love something or someone, for whatever the reason there comes a releasing time. And it does hurt.

And at the end of that year, we moved too, on to another farm.

Finally in 1955, we landed on a farm that Daddy loved. It had cleared fertile land, a big roomy house for our family, ponds to water the crops, wide open spaces, excellent barns and outside buildings, and a small tenant home where Daddy could house folks to help us work. And most important, it was very close to our church. We were thankful for a fair-minded landlord who respected and trusted Daddy's wisdom and ability to raise tobacco. We could draw water from a hand pump instead of from a bucket on a chain. And for the first time, my parents owned the equipment to work the farm and could purchase the livestock.

Those long-gone days of my childhood are treasured memories of the post World War II years. They were simple times with simple pleasures, when little was much and seemed to be enough.

Even though I've had numerous pets throughout my life, there is a special part of my memory reserved for a fantastic, down-to-earth, ordinary black crow, simply called "Blackie."