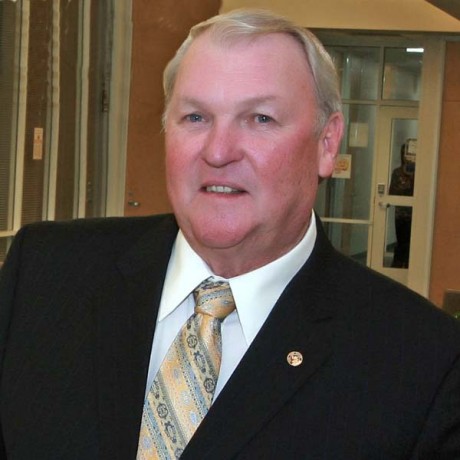 It’s Buddy Creed’s creed: “Find a way to get it done.”

When he came to work as South River Electric’s system engineer 45 years ago this month, the 30-year-old cooperative’s infrastructure needed an overhaul. The co-op had about 10,000 member accounts, mostly small country farms and houses. “Lines ran everywhere and every way,” Creed remembers. “Across fields, whatever they needed to reach the service. If there ever was a problem, it took linemen so long just to find out where the problem was.”

Buddy Creed found a way to get it done. With Marvin O. Marshall as the new general manager, they developed a work plan, acquired financing, instituted safety standards and rebuilt the system. At the same time, growth in western Harnett and Cumberland counties near Fort Bragg required the EMC to build new facilities in that area. And soon after he started, three ice storms ravaged the system within two months. Buddy and the South River EMC crews found a way to get it done.

“I wish I had taken notes and pictures of what’s happened here in the last 45 years,” Creed says. “It really is rewarding to have seen it develop into what it is today.”

South River EMC today employs 107 people and serves about 42,000 member accounts over some 5,377 miles of line and 30 substations in Cumberland, Harnett, Sampson, Bladen and Johnston counties. In the last 15 years the co-op has deployed state-of-the-art technology to map its system to GPS coordinates, install engineering analysis programs, streamline inventory control, and track projects in real time. Customer information software, an automated phone system, 24-hour account access and a high-tech outage management system expanded its customer service. “I don’t even know what some of this technology is called,” Creed admits. But he found a way to get it done, and it works.

The South River EMC board appointed Buddy Creed CEO when Marvin Marshall retired in 1996. “At that time, there were three computers here. And one was a mainframe. Since then we have placed a priority on using the right technology for the job.”

When Hurricane Fran ripped through central North Carolina in 1996, South River EMC could have used today’s technology. With all but maybe 100 services disconnected — and the co-op’s communication tower down as well — Creed first had to find a way to communicate the disaster. He did, and seven days later power was restored systemwide. Everyone had pitched in, including many community members and directors, such as Carlton Martin of Martin’s Meats in Godwin who supplied steaks and ice.

When the U.S. Department of Defense decided to contract its base electricity systems, Creed figured the cooperative could make an offer to Fort Bragg and Pope Air Force Base. Sure to be a massive undertaking, he joined forces with three other neighboring Touchstone Energy cooperatives and found a way to get it done. They formed Sandhills Utility Services and in 2003 won the contract, competing with larger utilities. “It was new to the Corps of Engineers, too,” he recalls. “They appreciated learning along with us. It was a real cooperative effort.” Sandhills not only upgraded Bragg’s system but also expanded as the base has and provided reliable service to this critical operation.

At the same time, South River EMC’s aged office facilities needed attention. Creed in 2000 found a way to get it done: a 42,000 square-foot headquarters outside Dunn, and later a consolidation of district operations in a new building at Fayetteville.

Perhaps the biggest change he’s seen occurred in the farm community. When he began at the co-op, farms were small, many growing tobacco that used one or two barns. The 2004 Tobacco Buyout saw small farms selling their allotments. “Mega-farms” in the transition bought acreage and the barns. Today these farms run on hundreds of acres growing everything from cotton to cantaloupes, a super challenge for an electric utility that has needed to “beef up the backbone,” as Creed puts it, and keep the power on.

A hallmark of Buddy Creed’s management has been “to treat all members fairly.” Balancing the needs of small households with mega-farms is not easy. But South River Electric’s principal is to do just that. “We make sure that every rate class pays their way,” Creed says. “Whatever it costs to serve them, that is what they pay. Some don’t agree with that, but it’s the right way to do it.” And despite challenges to that practice, Buddy Creed found a way to get it done.

Looking toward retirement this year, Buddy Creed says he will miss South River EMC. But he has plenty to look forward to: Lynda, the families of his sons, Chris and Clint, and hunting and fishing, especially along Pungo River.