Getting To Know…Kristi Overton Johnson 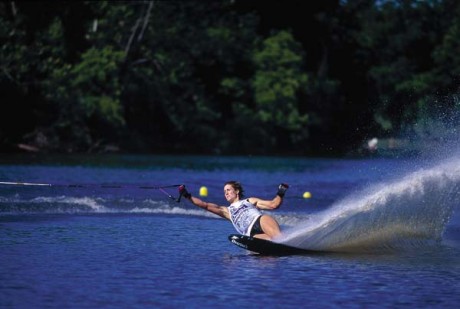 About: This Greenville, N.C., native started skiing on Pamlico River in Bath at age 5, and captured state, regional and national records before turning pro at age 13. Kristi decided to specialize in the slalom event due to a hip deformity. For many years, Kristi dominated the women's slalom event, accumulating 80 professional wins and capturing more No. 1 world rankings than any other female skier in history. She is an eight-time U.S. Masters Champion, four-time U.S. Open Champion, and held the world and national record in women's slalom from 1992–2010. Kristi departed from the professional circuit in 2004 after facing 10 major surgeries, including a complete reconstruction of her pelvis. Today, the married mother of three is a motivational speaker, a published book author and a columnist who works for the non-profit ministry she founded, Champion's Heart, a water-sports outreach program based in Florida that helps at-risk children. She recently was inducted in the North Carolina Sports Hall of Fame.

Quote: "Champions aren't people who never fall. They are people who continue to get up time and time again, learn from the mistakes and press forward, often one step at a time!"