The Women Tobacco Farmers in My Life 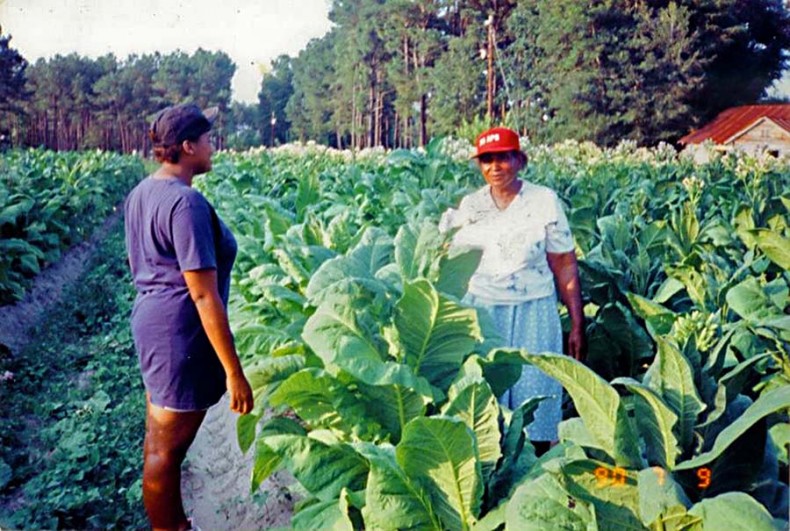 My mother, Mildred “Wallie” Keaton (right), with one of her many grandchildren, Paula Greene.

When it was reported that the last remaining tobacco warehouses in Southeastern North Carolina would close, it marked the end of a way of life for the small farmers.

By the 1960s, most landowners in Bladen and Columbus counties planted tobacco, but only a few of the men were full-time farmers. The black farmers who could least afford to farm full-time held public jobs that guaranteed a steady income. It was not unusual to find some black women playing a non-traditional role when the tobacco season rolled around.

These women took their husbands’ place in supervising the planting, tending and harvesting of the tobacco crop. They were also involved in what was considered women’s work: pulling plants, setting, chopping, stringing, handing and grading the cured tobacco.

One of the women who seemed to revel in the non-traditional role was my mother, Mildred Keaton.

She and her mother, Miami Andrews, had a long-standing love affair with tobacco. When the women gathered under the barn to “string tobacco,” those two would be found in the field, making sure that the “hands” did not take off too much. They would walk behind the young croppers to make sure they followed their instructions. When the “drag” came towards the barn, they could be seen walking behind it, picking up the tattered and sometimes muddied leaves that were dropped. They would go so far as to pick up the stems, add a couple of good leaves to it and hand it to the stringer.

To those women, they understand what each leaf stood for — money. Tobacco was their money crop. It was the source of their largest income of the year.  When the bills were due, they promised to pay everybody off “when I sell my tobacco.”

As soon as word got out that the tobacco markets were scheduled to open, everyone’s thoughts turned to getting space at the warehouse, and finding someone to get the tobacco there.

Several men in the Riegelwood area hauled tobacco, but Mrs. Estella Graham, the lone woman in the group, was my mother’s choice. “Miss Estella” was well known to the tobacco warehouse owners. Her first husband, Len Bryant, had that connection, and when he passed away, Miss Estella stepped in.

Before the tobacco market opened, Miss Estella brokered a deal with the warehouse owners. She worked to ensure that the small black tobacco farmers in East Arcadia were given space in the warehouses. She would tell the owners, “my people need to sell their tobacco.” When the market in Clarkton opened, Miss Estella would send word to my mother that she had a space, and the whole family got busy.

On the night before we went to market, the atmosphere was festive. Everyone in the family stayed up past the midnight hour. It was necessary that we wait until after the dew fell to prepare the cured tobacco for market — we would place sticks of cured tobacco on the grass, turning them to allow dew to fall on each side, making sure that each stick didn’t get in too “high order.”

At the crack of dawn, Miss Estella and her brother, Nathan Bowen, would arrive. They were a team, but Miss Estella was the boss. My mother would let one or two of us kids go with her and Miss Estella to the market.

At the tobacco market, your senses were overwhelmed by the sight and smell, the open-air warehouse, filled with rows and rows of cured tobacco — that strong, sweet aroma that every once in a while gave way to the smell of boiled peanuts. There was also a sense of uncertainty of not knowing what kind of tobacco would sell that day, but you hoped it was yours.

Miss Estella was a familiar sight at the warehouses in Clarkton, this 60-something-year-old black woman who acted as if she belonged among the big farmers, easily recognized by their bib overalls and straw hats with the green visors. She moved along behind the clean-cut, khaki wearing buyers from companies such as R.J. Reynolds and Phillip Morris.

This exciting event still lingers so vividly in our minds: As they approach our tobacco, Miss Estella goes to work. She listens as the auctioneer calls the bids, and watches as the buyers gesture as to their willingness to pay the price. She urges them to “come on boys, help us out.” She lets them know she’s there, and what she wants.

Earnestine Keaton lives in Riegelwood. She and her family have been members of Four County EMC since electricity came to eastern Columbus County.