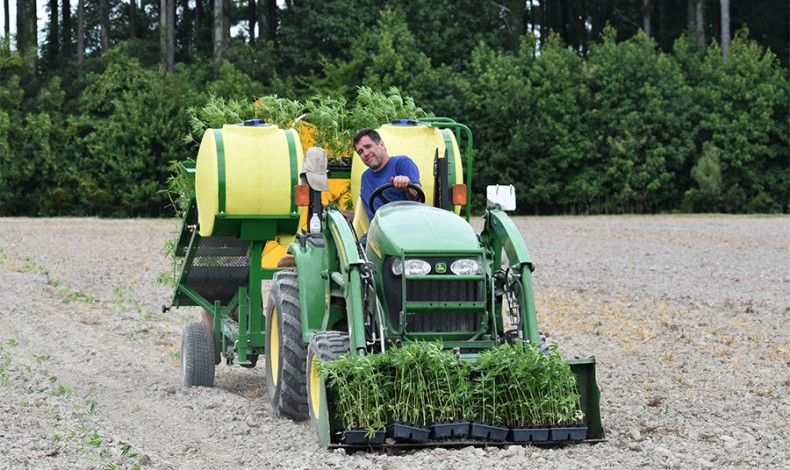 There is a lot of excitement over North Carolina’s newest cash crop: industrial hemp. There is also a fair amount of confusion about hemp, which is a type of cannabis. Yes, that cannabis, one form of which is also known as marijuana.

Industrial hemp is different from marijuana, however, in that it contains much less of the psychoactive chemical THC (tetrahydrocannabinol), which produces the “high” effect. Otherwise, there is little difference. Both marijuana and industrial hemp are the same plant species and look the same. The only way to tell the difference is by chemical analysis.

Most marijuana contains 20 to 30 percent THC. Industrial hemp, by law, must contain less than 0.3 percent THC.

“Most marijuana contains 20 to 30 percent THC. Industrial hemp, by law, must contain less than 0.3 percent THC,” says Rowan County Extension Director Amy-Lynn Albertson. “But it’s the same plant, right? Well, yes and no. Sweet corn and field corn are the same, but you wouldn’t serve field corn at your church picnic. Through traditional breeding, both have traits that have been selected for their different purposes.”

Specifically, hemp varieties have been selected for their seed oil and fiber properties, marijuana for its narcotic properties, she explains.

One plant, many uses

Growing hemp is by no means a new concept. Colonial farmers were required by England to grow hemp, used to make rope, cloth and oil for lamps. In John Lawson’s 1709 travel log “A New Voyage to Carolina,” hemp is mentioned several times as an important crop.

These days, one heavily marketed hemp-based product is CBD (or cannabidiol) oil, mainly extracted from flower buds and credited with relieving arthritic pain, anxiety and insomnia. But industrial hemp has much more to offer than CBD oil.

The whole plant can be used for a host of products, including bio fuels (much like corn to make ethanol), textiles, building materials, rope, mulch, animal bedding and paper.

“CBD is just the tip of the iceberg,” says Jessica Seymour, a registered dietitian and business partner at Lazy Gator’s Hemp Farm in Kinston. “There are over 140 identified natural chemicals in hemp which are beneficial to our health.”

Hemp seed oil, extracted mainly from the seeds of the plant, is used in cosmetics and as food. It isn’t good for deep frying, but it can be used for stir-frying and shallow frying. Its nutty flavor makes it ideal as an ingredient for salad dressings, marinades, smoothies, and in various recipes that call for oil. Hemp seeds are tasty to snack whole or hulled, and to use in recipes. The seeds are a good source of protein, having all nine essential amino acids, and are rich in omega-3 fatty acids.

Until recently, the Controlled Substance Act of 1970 made it illegal to grow, manufacture, possess, sell, import and distribute all forms of cannabis, including industrial hemp. That changed in the 2014 federal farm bill, when it was left to states to allow growing and cultivating of industrial hemp for research purposes — under certain strict conditions. North Carolina launched a pilot program at that time, through which farmers must first apply for and obtain a license from the NC Industrial Hemp Commission. Crops are routinely tested, and if a farmer’s hemp tests above the 0.3 percent THC limit, they will lose their license. 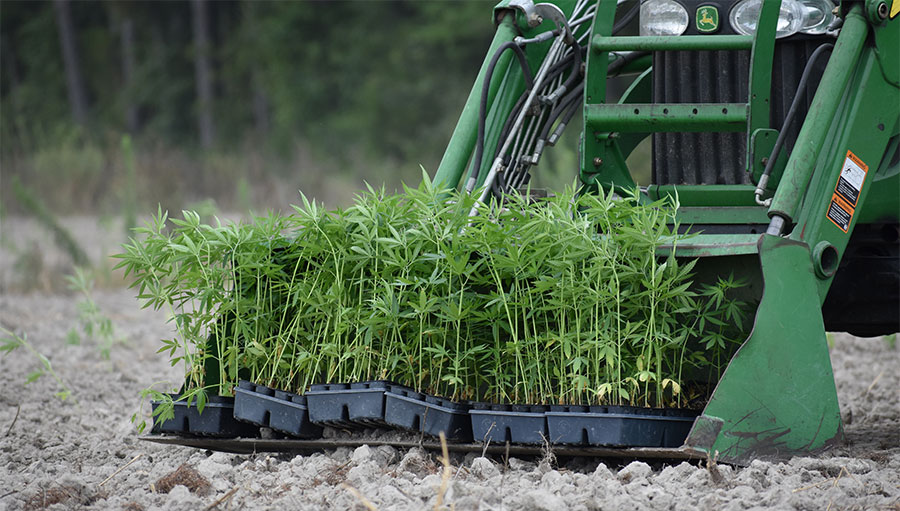 North Carolina now has 1,106 licensed industrial hemp growers, representing 13,167 licensed acres and more than 5 million square feet of licensed greenhouse production, according to the Industrial Hemp Commission. There are currently 621 registered processors in the state, including Hemp Inc.’s mill in Spring Hope, the largest industrial hemp processing facility in the country.

Gator Williams — another business partner at Lazy Gator’s Hemp Farm, along with Lester Anderson, Tommy Parker and Kory Williams — has held a license to grow industrial hemp since summer 2017. His farm sells hemp plants and seeds, as well as its own hemp products like a hemp oil skin cream. It also offers consultation to those looking to establish their own hemp businesses.

Having raised tobacco, Gator was able to adapt the same equipment for hemp as he used in growing tobacco by making a few adjustments, such as the planting distance of the rows.

He has found the bright leaf tobacco belt of Virginia and North Carolina, ranging east from Wake Forest, well-suited for growing the crop.

Hemp is grown in the field April through October and in greenhouses for the rest of the year. In order to flower, hemp needs at least 12 hours of daylight and 12 hours of dark. 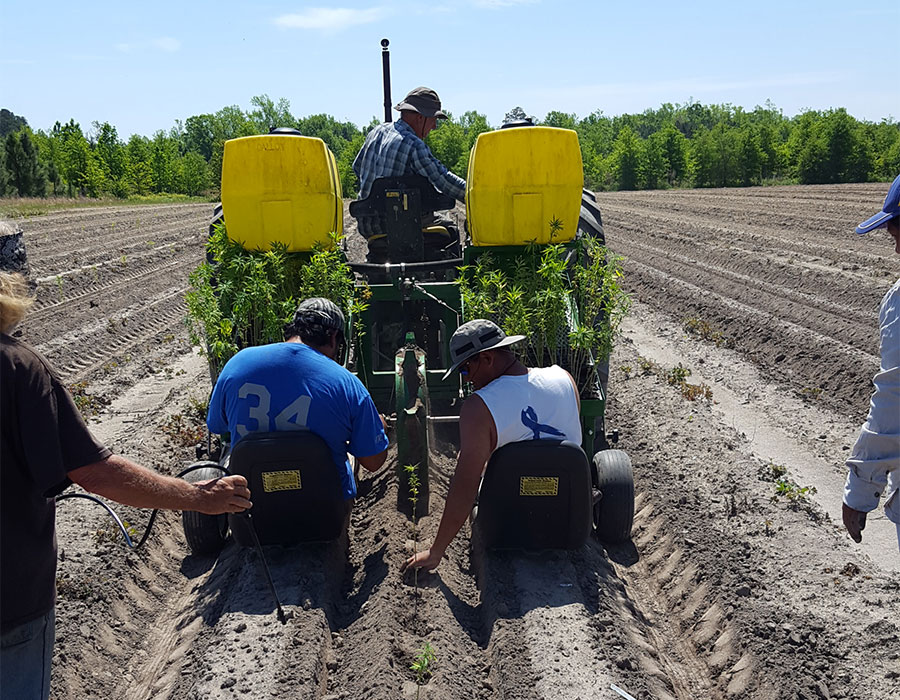 A future in flux

The 2018 federal farm bill included provisions that treat industrial hemp more like other agricultural products, although how that affects policy has yet to become fully clear. In the meantime, North Carolina will continue to operate under the Industrial Hemp Pilot Program authorized in 2014.

The legality of CBD oil is also in flux. The 2018 law should open up more legal uses of the oil, but its use in food products remain unclear. 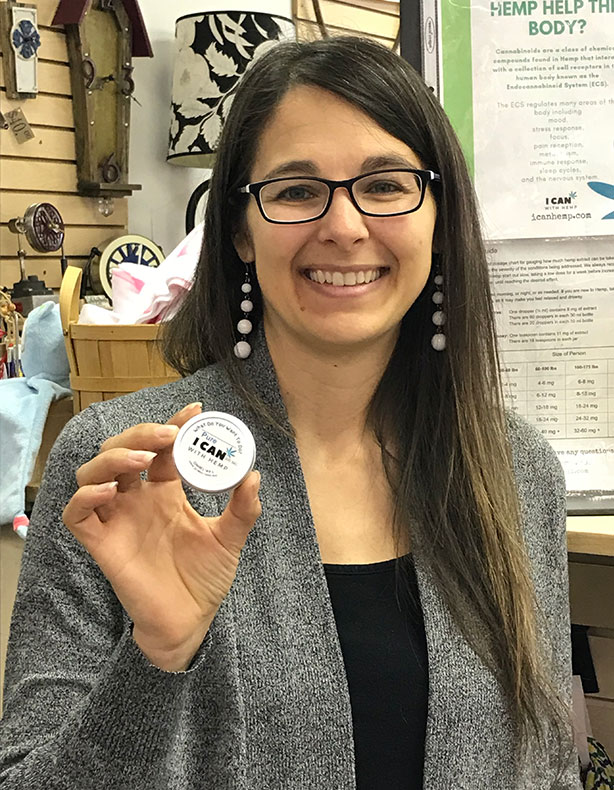 Jessica Parker, owner of Wake County-based I Can Hemp Products, is a manufacturer, retailer and wholesaler of hemp products. Photo by Donna Campbell Smith.

Jessica Parker, owner of Wake County-based I Can Hemp Products, is a manufacturer, retailer and wholesaler of hemp products. She first became aware of the benefits of CBD oil when her husband started using it to treat chronic pain — it worked where heavy doses of Ibuprofen had failed. She used it herself to treat wrist and shoulder pain, and now touts the extract as a life changer.

“We first started making our own hemp salve on a whim, just to see if we could do it,” she says. “Then we were giving it away to friends and family, who were finding the same benefits we were, and it just grew from there.”

Jessica uses organic, locally grown hemp flowers to create her handmade hemp-infused products, which she markets at craft fairs, local shops and via her website. Most of what she sells are bath products, salves and massage oils. About a third of her CBD oil products are edible, which she has pulled from shelves until it becomes clear how the regulations will pan out.

Being a pilot program, North Carolina’s hemp industry will evolve as federal policy is interpreted and implemented at the state level. But Blake Butler, executive director of the NC Industrial Hemp Association, is working for a future where hemp is a common commodity once more.

“With the exponential growth, the CBD market has become increasingly competitive,” he says. “Farmers need to diversify, and start growing industrial hemp for fiber and grain.”

industrialhemp.ces.ncsu.edu
Extensive information on hemp, including dates for workshops, meetings and tours

ncindhemp.org
The trade association for NC industrial hemp growers, with a mission is to support and educate

ncagr.gov/hemp
Develops rules and oversees the licensing-fee structures for the industry in the state throught the NC Department of Agriculture