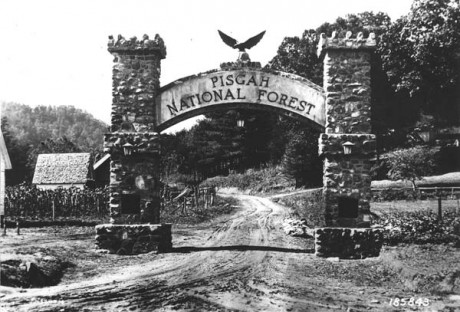 The American Forestry Association was a strong advocate of establishing national forests in the Appalachian Mountains. Shown here is the entrance to North Carolina’s Pisgah National Forest in 1924. (U.S. Forest Service photo)

North Carolina claims the first flight of Wilbur and Orville Wright on December 17, 1903, at Kitty Hawk. But an even earlier first is often overlooked—the very first forest management in North America occurred in western North Carolina.

In 1888 George Vanderbilt purchased 2,000 acres of land near Asheville. He named his estate "Biltmore" and imagined that the eroding farm fields and poorly cut woodland slopes then devoid of trees would someday be thick forests and lovely gardens. In 1895 he bought an additional 80,000 acres of land that stretched south of his Biltmore House and called this area Pisgah Forest ("pisgah" is Hebrew for summit). Eventually, his landholdings would equal 125,000 acres.

At this time, there were only two trained foresters in America. Both had been trained in Europe, although one was an American (Gifford Pinchot) and the other was a German (Bernard Fernow). As a businessman, George Vanderbilt believed that a profit could be made from careful management of the forest, so he hired Pinchot in 1892 to manage his forestland under this philosophy. Gifford Pinchot implemented the first forest management plan for an American forest, using methods that would both improve the forest and provide a profit. Under Pinchot's direction, crews reforested cut-over and eroded areas on the estate and selectively cut logs. 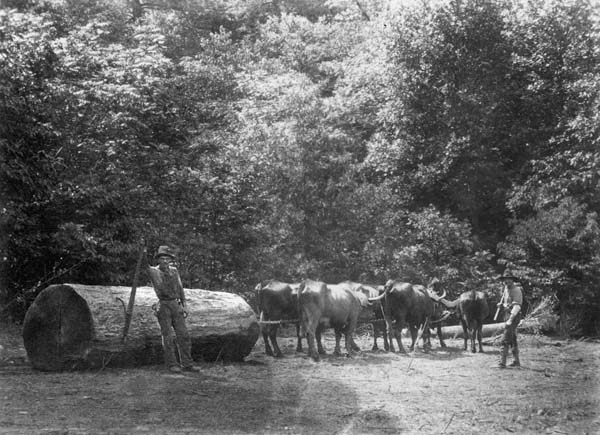 Three yoke of steers were required for “snaking” this huge log to the bank of Big Creek in Pisgah Forest on the Vanderbilt estate. The Schenck manuscript from which this image is drawn is from the collections of the Forest History Society in Durham.

In 1895 Pinchot left Biltmore to do private consulting in New York. He became in 1898 chief of the recently-formed U.S. Division of Forestry (renamed the Bureau of Forestry in 1901). The management of our nation's forest reserves was transferred in 1905 from the Department of the Interior to the Department of Agriculture. The name was changed to the USDA Forest Service, and Pinchot served as the first chief.

To replace Pinchot, Vanderbilt cabled Carl Alwin Schenck, a young forester in Germany, and asked if he would come to America to manage Biltmore and Pisgah Forest. Schenck arrived in 1895 faced with the monumental challenge of managing thousands of acres of eroding forestland with no assistance, no map, and no real knowledge of American trees or forests. 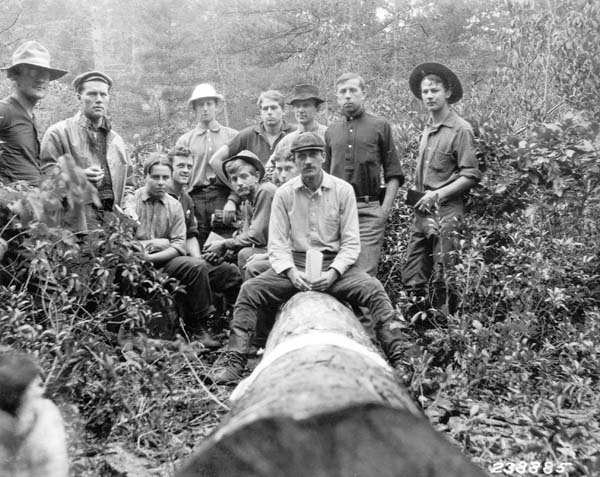 In summer 1905 in the Pink-bed Section of what is now the Pisgah-Croatan National Forest. At the time, the Biltmore Forest School operated under the direction of Carl Alwin Schenck (1868–1955) on George Vanderbilt’s Biltmore Estate. (U.S. Forest Service photo)

Schenck began to take on apprentices to help him in his work on Vanderbilt's forest. These early forest rangers continually badgered him with myriad questions about the forest. Schenck recalled one of Pinchot's recommendations about training the sons of lumbermen so they could go back, work for their fathers, and carry out some of this new forest management philosophy. So in 1898, Schenck established the Biltmore Forest School, the first forestry school in America, in the Pink Beds Valley near Brevard, Transylvania County. He taught during the day and, because there were no texts on American forestry, he wrote the textbooks for his courses in the evening.

The school consisted of a one-year program to train foresters to work in lumber companies. Class size was 25–40 students. Each student paid a fee, half of which went to Vanderbilt, and was required to provide his own horse. Schenck's "boys," as they were called, spent winters on the Biltmore Estate and summers in the Pink Beds. Their year of schooling included morning lectures, afternoon field work, an internship, and a thesis describing what they'd learned. Schenck personally taught the young men in all aspects of practical and textbook forestry. He emphasized not just preservation, but forest management practices that would assure continued production of saleable timber. This was sustainable forest management, which we practice today. 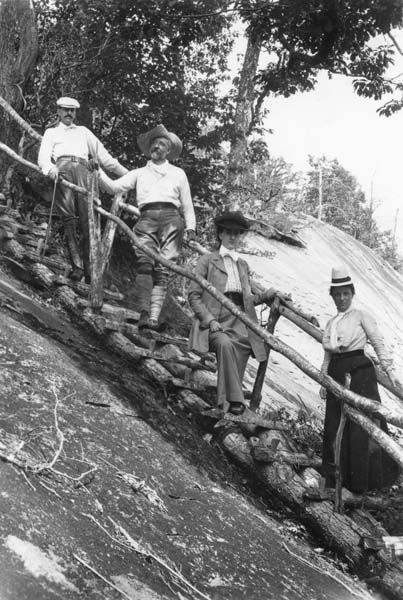 A Vanderbilt party in 1901 scales the bluffs of Lookingglass Rock in Pisgah Forest on the Biltmore Estate with the help of rustic ladders. On top, George W. Vanderbilt; next to him, his friend and physician, Dr. S. W. Battle; next, Mrs. Edith Vanderbilt in her riding suit; lowest, Miss Marion Olmsted, daughter of the famous landscape architect Frederick Law Olmsted, Sr.

First out of the gate

As Scheck's students were gathering forest data, they discovered that it would be easier if they could read the diameter of the tree with marks made on their axe handles. Thus, the Biltmore Stick was born. When rodents and small mammals foiled their attempt to regenerate local tree species by planting nuts and acorns, Schenck ordered white pine seedlings from Germany. Later, he began his own tree nursery to help replenish the forest with native seedlings, and he fertilized them with manure from his own barn.

See evidence of many of the forestry firsts in western North Carolina:

The Cradle of Forestry Historic Site in Pisgah National Forest near Brevard, the site of the first forestry school, houses a discovery center and outdoor trails with original buildings and interpretive signage. (828) 877-3130 or cradleofforestry.com

The North Carolina Arboretum in Asheville, located on the Pisgah National Forest, is the home of gardens designed by Frederick Law Olmsted who was employed by Vanderbilt to beautify his property. ncarboretum.org

The Biltmore Estate includes 8,000 acres of Vanderbilt's managed forest, gardens, and his 250-room house that is open for public viewing. biltmore.com