Electric cooperatives make an impact at home and abroad 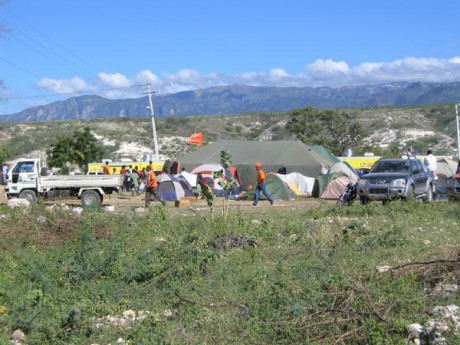 Last year, North Carolina co-ops were among those who donated money, equipment and personnel to help communities recover from the January earthquake in Haiti, where NRECA International Programs has been active since 2005.

How do you build a better world? By changing one life at a time.

Driven by this premise, electric cooperatives brought power and light to millions of consumers across the U.S., forever altering the economic fortunes of rural America. Now, with designation of 2012 as the International Year of Cooperatives, 900-plus electric cooperatives around the country are celebrating the impact they have made nationally and overseas.

As late as 1935, nearly 90 percent of rural residents were living in the dark — relying on iceboxes or spring houses to cool food, kerosene lamps for lighting, woodstoves for cooking, and hand pumps for getting water from wells. The reason: the big utilities had decided that there was no profit to be made extending power lines into the countryside to hook up farms and small towns.

That's where the co-op business model came into play.

Farmers and other leaders realized central station electricity service would end the drudgery rural life. After clamoring for relief for decades, they received a big shot in the arm in May 1935 when President Franklin D. Roosevelt signed an executive order creating the federal Rural Electrification Administration (REA) — now Rural Utilities Service. The agency's mission: provide low-cost loans as well as engineering and administrative support to help electrify rural regions.

"Electricity is a modern necessity of life and ought to be in every village, every home, and every farm in every part of the United States," Roosevelt announced.

REA financing initially was meant to entice big power companies to begin rural line construction. When they balked, it soon became clear rural electrification would only be accomplished by farmers and their rural neighbors doing it themselves by joining forces to form electric cooperatives.

Three-quarters of a century later, electric co-ops are still building a better future by delivering affordable electric service to 42 million members spread across 75 percent of the nation. But electric co-ops didn't stop there.

Working together, more than 300 U.S. electric cooperatives, including many in North Carolina, have delivered the benefits of safe and reliable electric service to more than 100 million people in 40-plus countries since November 1962. Last year, North Carolina co-ops were among those who donated money, equipment and personnel to help communities recover from the January earthquake in Haiti, where NRECA International Programs has been active since 2005.

At the invitation of President John F. Kennedy, NRECA joined forces with the U.S. Agency for International Development (USAID) to share electric co-op expertise and export the democratic, self-help cooperative model to undeveloped countries. In many cases, teams of volunteer American electric co-op linemen head to foreign lands for a few weeks to teach local lineworkers safe work practices. Then NRECA staff instructs locals how to maintain simple power grids and run their own utilities.

"We're not only providing a service, we share knowledge and best construction practice skills on a lineman-to-lineman basis," explains Ixcan, Guatemala volunteer Chris Stephens, manager of engineering for Palmetto, Ga.-based Coweta-Fayette Electric Membership Corporation. "Those we help may speak a different language, but they speak the same work."

Much more to be done

More than 2 billion people around the globe still live without power — 64 million in Latin America, 500 million in Africa, and more than 1 billion in Asia.

"It was a humbling experience, to see the way people lived compared to what we have," recalls Craig Carlan, a lineman for Clarkesville, Ga.-based Habersham Electric Membership Corporation, who also worked in Guatemala. "In the village we electrified, kids will have the opportunity to get a better education. They have dreams, too, just like we have dreams. Maybe they can set higher goals now."