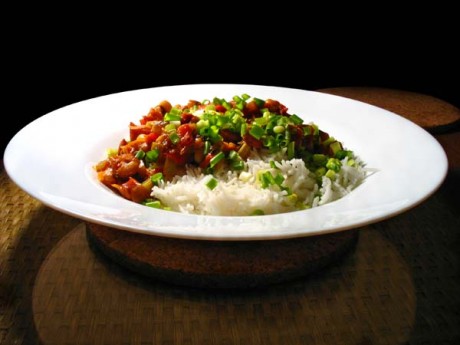 If you celebrate the New Year anywhere near the South, you're probably going to be enjoying black-eyed peas in some form. If you don't already know, you're taking part in a tradition dating back to Civil War days. Once considered only suitable for livestock fodder and food for slaves, fields of black-eyed peas, fortunately, were ignored by Gen. Sherman's troops as they stormed the South, and became a food staple for surviving Confederates.

There are many variations of the traditional Hoppin' John, but here are my personal black-eyed pea favorites. Spread the luck around by enjoying this Southern tradition surrounded by the joy of family.

Since then, the humble black-eyed pea has been lovingly considered good luck in the coming year. Served as Hoppin' John with heaping bowls of hot greens and sweet cornbread, you set the stage for a year of prosperity. Traditionally, black-eyed peas represent coins, the greens are dollars, and the cornbread gold. Black-eyed peas eaten with stewed tomatoes represent wealth and health.

Adding a shiny penny or dime to the pot just before serving is believed to bestow an extra portion of luck to the finder. Just don't swallow the coin or your luck may take a bad turn.

I usually serve my Hoppin' John as a side with pulled pork and collards. A feast like that and a few reasonably achievable New Year's resolutions are sure to guarantee success in the year to come.