Lady Pirates of the Carolina Coast

The storied lives of Anne Bonny and Mary Read 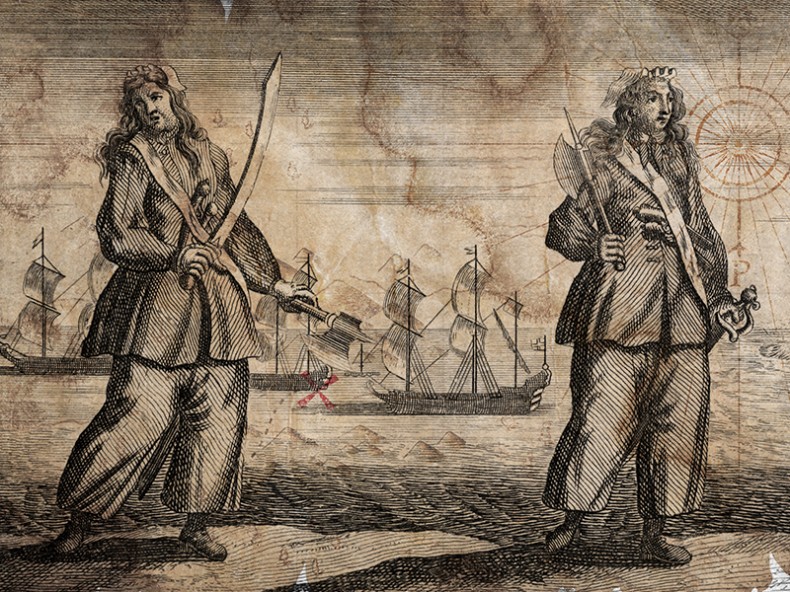 Carolina colonial history is full of stories of pirates, evil men who preyed on unarmed vessels along the Atlantic coast. Sometimes the line between honest seaman and pirate was a fuzzy one. Perhaps the fuzziest line of all was drawn in the case of two pirates who sailed under the black flag of “Calico Jack” Rackham, who countered the typical image of a pirate — not because of what side of the law they were on, but because of their gender. They were the lady pirates Anne Bonny and Mary Read.

This dastardly duo were among a very few female pirates in recorded history, and most of what we know about them is drawn from the 1724 book, “A General History of the Pyrates.”

Anne Cormac was born in Ireland in 1702, the illegitimate daughter of William Cormac and his servant, Mary Brennan. 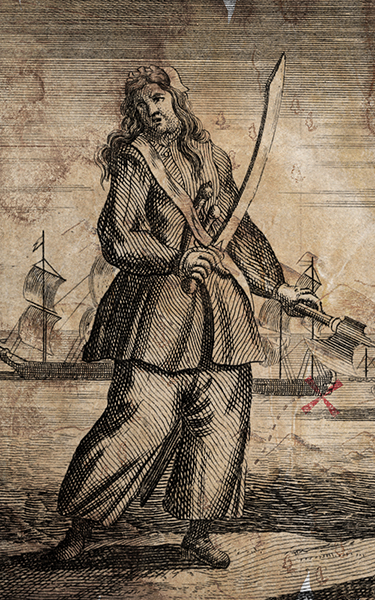 Cormac later sailed with his lover and baby to America. They settled near what is now Charleston, South Carolina. When Anne was a teenager, her mother died. Anne became manager of their plantation. She had a hot temper; legend tells she beat a man nearly to death with a chair when he made unwanted advances.

Fed up with the genteel life of the colonial South, she married James Bonny, who was known to dabble in pirating. That is how Anne met the pirate Calico Jack. They became lovers, and she ran off to sea with him. Anne gave birth to Jack’s child while they were in Cuba. (It is believed they left the baby with friends and went back to sea.)

By now, Anne was a full-fledged member of the crew. She dressed in men’s clothing, probably at Jack’s request. She was handy with sword and pistol, and quick to use them.

Anne next fell for one of Jack’s crewmen. Although in a twist fit for a swashbuckling movie script, Anne soon learned that fellow crewman “Mark” Read was also a female disguised in men’s clothing.

Mary Read (aka Mark), began life differently than Anne. Born in England, she was disguised as a boy from infancy. Her widowed mother pretended Mary was a boy to receive a death benefit not otherwise available to a girl child. 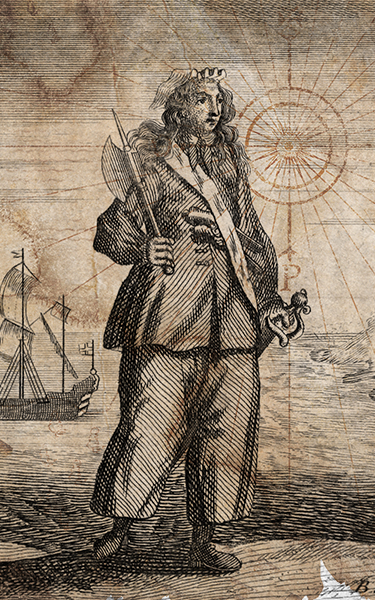 When Mary was older, Mrs. Read hired her daughter out as a footboy. It wasn’t long before Mary tired of that job and ran away. She took on a position with a British man-of-war and later joined the army as a soldier.

Mary, still believed to be a man by all, fell in love with a fellow soldier. They kept her gender a secret until after their time with the army, at which point they became publicly married. Mary and her husband lived a normal and happy life running a tavern.

Then, Mary’s husband died. She failed with the tavern business and returned to the life she knew best. Disguised as a man she joined an army in Holland. Later she took a position on board a ship sailing for the West Indies.

Pirates, led by Calico Jack, attacked the merchant ship, and Mary was taken prisoner. From that time on, Mary was a pirate.

It wasn’t long before Mary and Anne became aware that they were each a woman. Calico Jack, none the wiser at first, became jealous of “Mark” and threatened to slit his throat. Anne had to let him in on her and Mary’s secret.

But the drama didn’t end there. Mary had an affair with another crewman and became pregnant. Meanwhile, Calico Jack’s ship was captured, and the pirates were put on trial. The men were all sentenced to hang, with Jack scheduled to die the next day. He asked to see his beloved Anne before his execution, but if he’d hoped for sympathy, he got none. As Anne succinctly put it: “I am sorry to see you in this predicament, but had you fought like a man, you would not have to die like a dog.”

Mary and Anne were tried, however, both were pregnant at the time and since a pregnant woman could not receive the death penalty, their sentences were delayed.

Mary, however, died while in prison. Anne’s fate was unknown until the twentieth century, when a rumor surfaced that her name was found in a family Bible, along with a birth certificate and some letters. The birth certificate named a boy child, John Cormac Bonny, whose father was named as John Rackham.

If this rumor is true, it supports the theory that Anne’s father bought her pardon and sent her back to the Carolinas. Some believe Anne Bonny married a man named Joseph Burleigh, lived to a ripe old age and is buried in Virginia. But to this day, how Anne truly spent her later years remains a mystery.