Local Foods Take the Guesswork out of Gifting

These award-winning flavors are sure to please 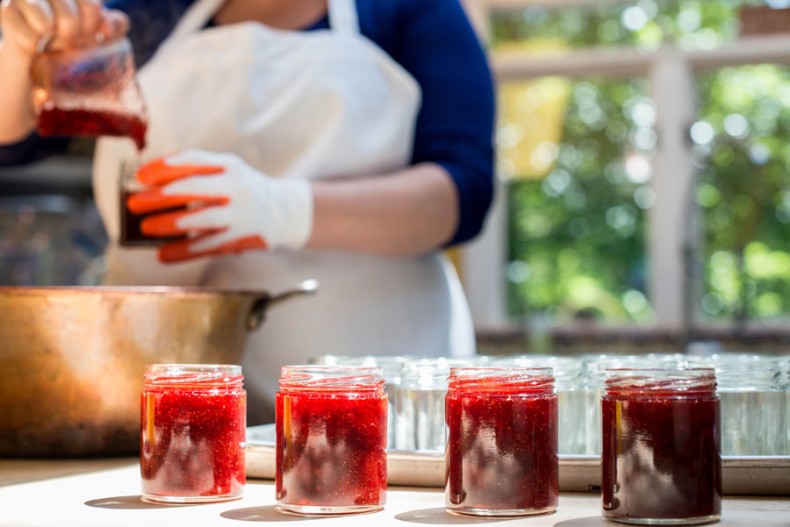 Farmer’s Daughter won a Good Food Award this year for its Strawberry Preserves.

North Carolina’s food artisans have offered up another basket full of gift ideas this year. While food entrepreneurs and their delectable creations abound across the state, we are sharing some of the winners of impressive awards competitions. 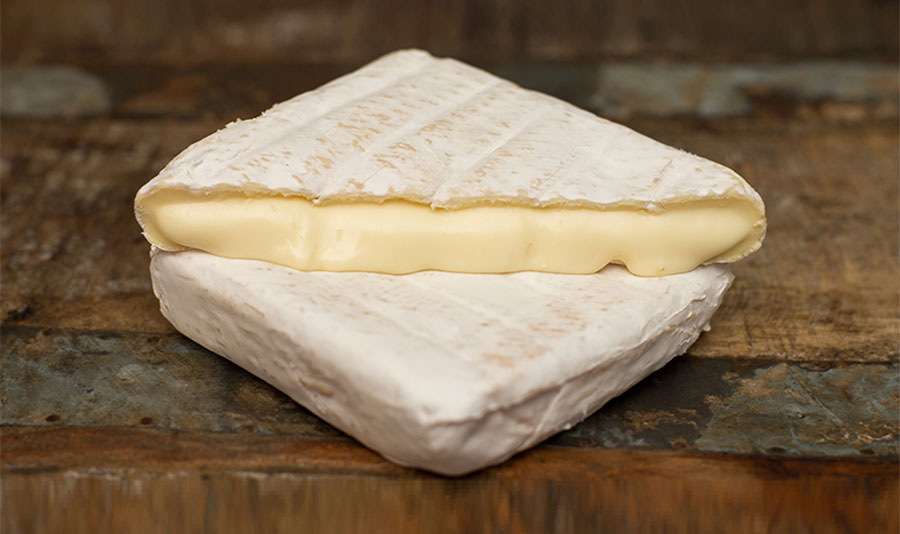 Lady Edison’s hams are aged at least 18 months which give them a taste more savory than salty. Owner Sam Suchoff, who is known for The Pig restaurant in Chapel Hill, produces the ham in conjunction with Rufus Brown of Johnston County Hams. The ham is quite pricey, and is available in specialty stores and online.

Cheese pairs perfectly with ham, or as an appetizer or after-dinner treat. A selection of cheeses makes a nice gift and North Carolina has many award-winning cheese makers who offer a wide variety. This year, Boxcarr Handmade Cheese of Cedar Grove (boxcarrhandmadecheese.com) captured a Good Food Award for its “cottonseed” cheese. 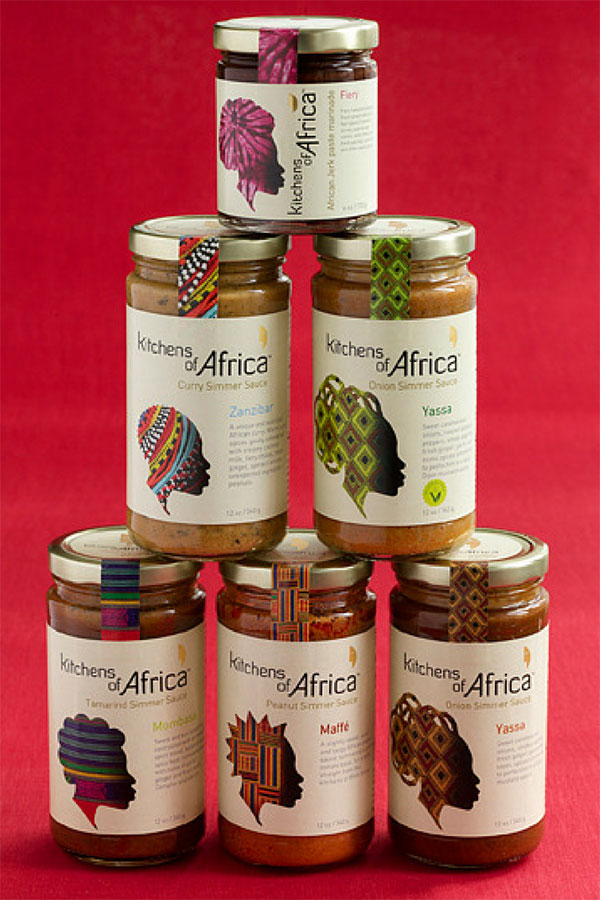 A variety of sauces available from Kitchens Of Africa

Owners Austin Genke, wife Dani, and sister Samantha have racked up an impressive list of awards the past few years. Their website describes cottonseed as having a “delicate, snowy rind that yields to a creamy, gooey center with notes of earth and truffle in a mixed milk masterpiece.” Their cheeses are stocked in stores statewide and beyond.

There’s always a place for condiments and sauces that kick up flavors and add to a celebration. One sauce with Good Food Award accolades is Kitchens of Africa’s Zanzibar Curry Simmer Sauce (kitchensofafrica.com). Jainaba Jeng, its founder, draws inspiration from her home country of Gambia, in western Africa, in creating her sauces and marinades. Another of her sauces, Yassa, an onion simmer sauce, won last year and was mentioned in our December 2016 issue (Gifts with Good Taste). 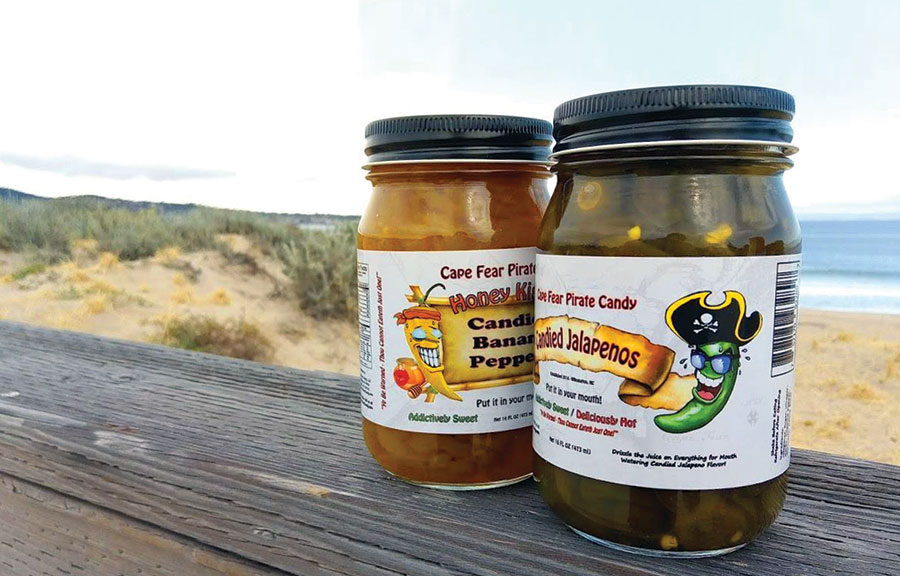 Preserves, jams and jellies always seem to make the list as a popular food gift. What better way to capture summer’s goodness to enjoy year-round? Farmer’s Daughter won its second Good Food Award this year for its Strawberry Preserves, made from organic, peak-season strawberries.

Each year, the North Carolina Specialty Foods Association holds a statewide competition. Food entrepreneurs across the state compete in several categories. This year’s winner in the condiment category, which went on to win the overall Grand Champion title, is Cape Fear Pirate Candy for its Honey Kissed Candied Banana Peppers (capefearpiratecandy.com). For a complete list of the winners, see below.

Owner Tara Moore of Wilmington describes the flavor as sweet, mildly spicy or tangy, with a kiss of honey. They also offer Candied Jalapenos and a few other products. 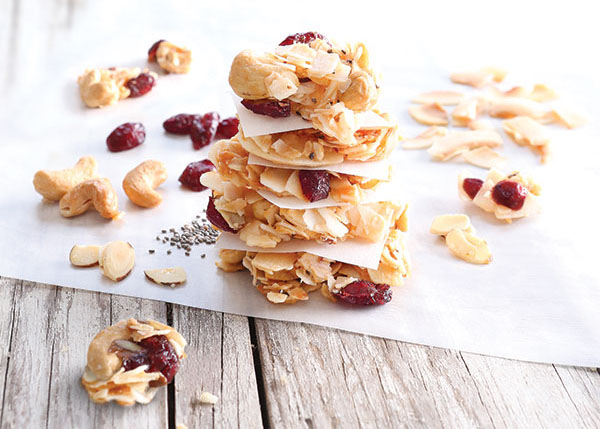 Greensboro-based Creative Snacks was awarded a Specialty Food Association award in 2017 for its Organic Coconut snack with cranberries, cashews, almonds and chia seeds

For the sweet tooth, plenty of local confections are sure to please. Two North Carolina companies garnered Good Food Awards this year. French Broad Chocolates of Asheville (frenchbroadchocolates.com) was recognized for its Sorghum Caramel. Last year, the company won for its Hazelnut & Almond Dragee. It offers plenty of other temptations in both chocolate and confections.

Gingerbread and holidays are a perfect combo, and GerDan Chocolates (gerdanchocolates.wixsite.com) of Smithfield delivers a treat that evokes the iconic holiday flavor. Gingerbread Caramels were the winning ticket for GerDan, capturing a Good Food Award this year.

The business name combines the owners’ names, the husband and wife team of Geraldine and Dan Doren. Their gingerbread caramels were inspired by a children’s treat from Geraldine’s hometown of Dublin, Ireland. GerDan’s version uses cream from a nearby creamery and locally grown organic ginger. They also won a bronze medal for their Rhubarb and Ginger bonbon which consists of rhubarb caramel on top of fresh ginger ganache in a dark chocolate shell.

“The inspiration for this confection came from one of my favorite pies, rhubarb and ginger, which my mother would make back in Ireland,” says Geraldine. The company is also known for its Brew Chews, which are caramels made with beer.

Crunchy, slightly salty snacks add a counterbalance to sugary sweets. Creative Snacks Company (creativesnacks.com) of Greensboro captured a SOFI (Specialty Food Association) award this year for its Organic Coconut snack with cranberries, cashews, almonds and chia seeds. SOFI awards represent culinary creativity across America and around the globe. Find Creative Snacks Company’s other SOFI-winning snacks and its other products at stores statewide and beyond. 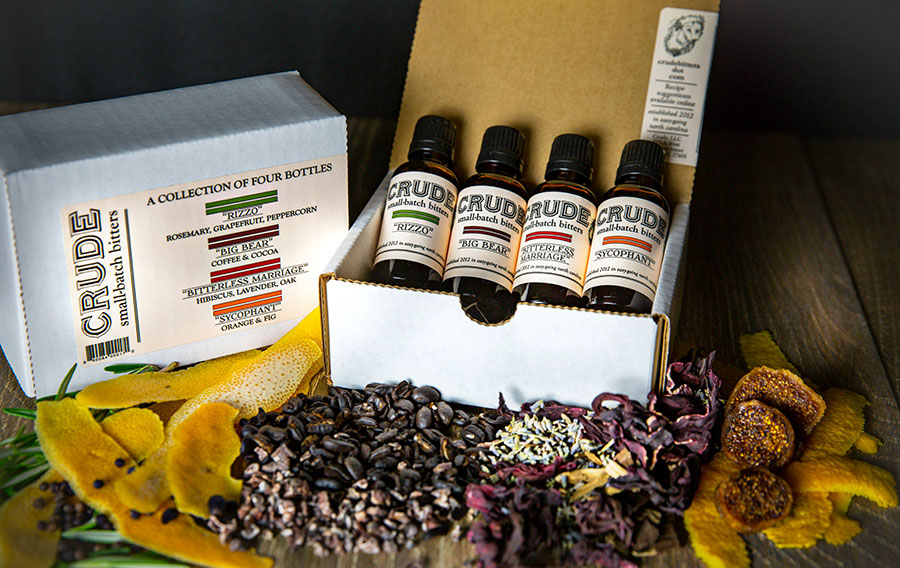 Raleigh-based Crude Bitters and Sodas offers sample sets that are popular during the holidays.

Cocktail bitters are a flavor extract, adding aroma and balance to a mixed drink — think of them as a seasoning for cocktails. A Raleigh-based company captured a Good Food Award this year for its “Apothecary #15” spruce and birch bitters.

“Cocktail bitters are important ingredients in a well-made drink, but remain an afterthought even with a growing focus on local or craft spirits and homemade syrups,” explains Craig Rudewicz, of the downtown Raleigh-based Crude Bitters and Sodas (crudebitters.com). Rudewicz and wife Lindsay Lasserre create a number of bitters with pleasing flavor profiles.

“I wanted to craft a bitters that was woodsy and bitter but still had a depth of flavor like a vermouth or amaro,” he says. “Spicebush is used in the maceration, which lends a citrusy and dark spice flavor to the woodsy aroma.”

Crude Bitters and Sodas has two different sample sets that are popular during the holidays. One is a four-bottle set of year-round flavors (rosemary-grapefruit-peppercorn, coffee-cocoa, hibiscus-lavender-oak, and orange-fig). The other is a build-your-own-set of seasonal bitters. All have usage recommendations on the bottle. The company teaches classes three to four times each month, which also can be a fun gift.

These artisans, farms and shops are just a small sample of what the state has to offer. Visit gottobenc.com for more gift-giving ideas from food artisans near you, or leave a comment below with your favorite finds.