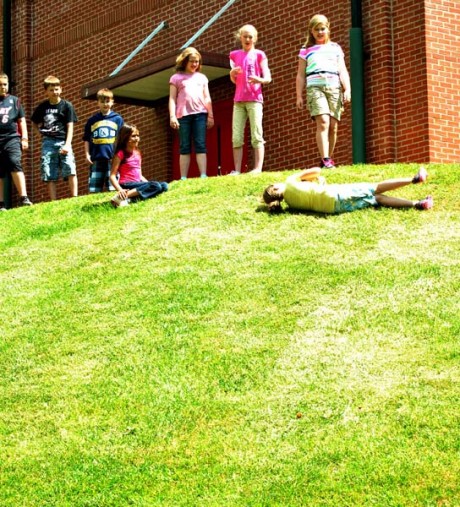 Classes are going on in T.C. Henderson Elementary School behind them, but a bunch of squealing and laughing fifth graders are rolling over and over down a hill. What they're doing is not just fun, say naturalist Katie Newton and Michellle Owen, mother of one of the students, as they watch. It's science, an illustration of momentum.

And as the kids launch themselves into the air, other members of Tammi Humphreys' fifth grade class in the Transylvania County school are trying to float improvised boats — leaves, sticks, pieces of bark — down a small stream nearby. A dead leaf makes it to the finish line in "One minute, 6 seconds," naturalist Molly Dullanty triumphantly calls out. But not without a push off some pebbles, where friction between the surface of the leaf and the surface of the rocks keeps it temporarily immobile. 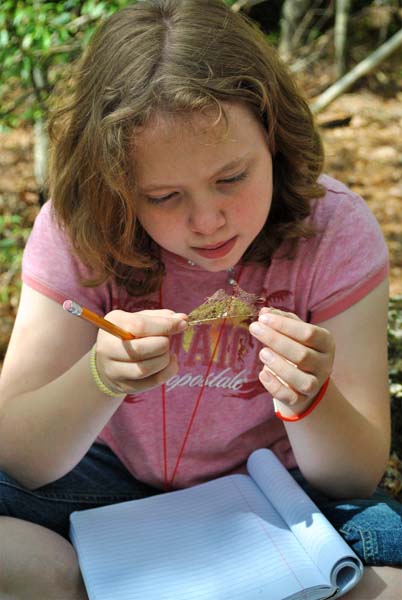 Emily Shelton is fascinated in her outdoor science class led by the Muddy Sneakers program.

Momentum, friction, inertia and gravity are the stuff of fifth grade science textbooks and North Carolina's End of Grade (EOG) science tests. But at T.C. Henderson School — a Haywood EMC member account — and a dozen other schools in the North Carolina mountains, they've become more than concepts these last four years. Under the guidance of the school staff and an innovative environmental education organization called Muddy Sneakers, they're part of everyday life, to be touched, observed, and wondered at. Financed by the schools, voluntary donations and grants, naturalists from private nonprofit Muddy Sneakers take the kids, and the standard science curriculum, outdoors from six to 10 days a year.

When the students examine their finds in the schoolyards or state and national forests and parks that serve as classrooms, "We have to tell whether it's abiotic or biotic. Abiotic, it's dead and it's never been alive. Biotic, it's dead but it's been alive," says Grace.

The first year that T.C. Henderson students took part in Muddy Sneakers, the percentage passing the EOG science test rose to the low 90s, a jump from the former low- to mid-80s. The next year, the passing percentage rose to the mid-90s, and in 2010-11, 100 percent passed and the school was named an N.C. Honor School of Excellence, putting it the top 8 percent of the state's schools. 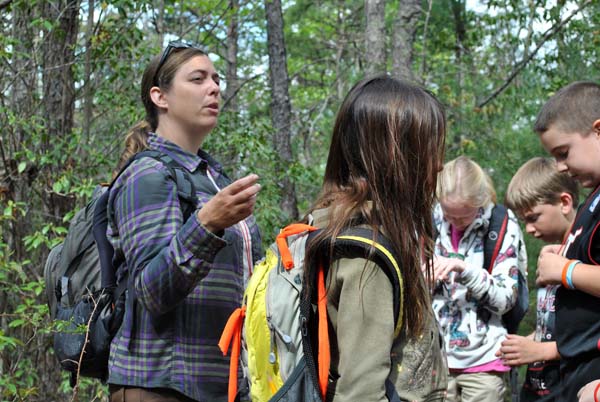 "What changed was the addition of Muddy Sneakers," says principal Tony Meachum.

At Pisgah Forest Elementary outside Brevard, the first-year jump was even more dramatic, about 35 percent. And the kids were enthusiastic, so much so that they made and sold popcorn to help pay the program's costs.

By 2010-11, when early gains had leveled out, passing rates at the 13 Muddy Sneakers schools in Transylvania, Henderson, McDowell and Buncombe counties and the Asheville city system were still 13 percent above average, says executive director Ryan Olson, a former administrator with the Nature Conservancy in South Carolina..

And new talent is being discovered, says program director Carlton Burke, former curator of exhibits at the Western North Carolina Nature Center in Asheville. "Some of the students that don't do well in the classroom do a lot better outdoors, become a Grade A student."

One student, asked which was his favorite expedition, said the first, "because that was the first time he'd been on a hike," recalls Gloria Clouse, a 35-year science teacher who is board chairman. 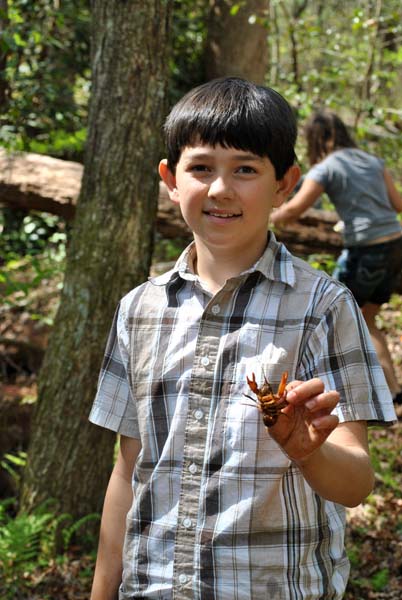 Cray McCall holds a crayfish straight out of a schoolyard creek.

Children from rural schools already have one leg up on knowing the outdoors, says program director Burke. "Even some of the girls may go hunting and fishing with their dads."

Yet, says naturalist Newton, simply being able to identify a bird, a bee or a crayfish isn't enough to give a child an understanding of its place in the natural world. With Muddy Sneakers, they learn "What does it eat? Who eats it?"

This is no field trip

Muddy Sneakers got its start five years ago when Sandy Schenck, owner of private summer camp Green River Preserve in Henderson County, started wondering if there was a way to bring the summer-camp experience to more students. So Schenck, John Huie, former director of the N.C. Outward Bound School, N.C. Rep. Chuck McGrady, a former camp director, and Cedar Mountain conservationist Aleen Steinberg met on Schenk's front porch and launched a pilot project and then, four years ago, the full-fledged program.

Environmental education is on a roll nationwide, says Olson. What makes Muddy Sneakers unique is its focus on doing what the schools need to meet their standards. "When you cross that line, you stop being a field trip and become a partner."

Schools have responded by coming up with about one-third of the $24 per-student per-day cost, which, in addition to paying naturalists' salaries, buys compasses, magnifying glasses and all-important rubber boots. "They love getting in the creek. We try to make it safe," says Burke.

In 2010, the N.C. Wildlife Federation named Muddy Sneakers "Conservation Organization of the Year," and groups in other states have been asking about the possibility of establishing clones. "We're hoping it's going to take off and spread across the South — at least," says Schenck.

In the field, naturalists try to keep lively fifth grade minds on the subject despite the distractions of the outdoors. Newton and her class of nine, plus chaperone Owen, perch on an old cistern to consider motion in all its forms. As the students give examples — without motion, chickens would lay no eggs and "We wouldn't have anything to eat for breakfast" — several of the boys scrape debris off the cistern to paint their faces with. Newton lets it go for awhile, then puts her foot down.

And sometimes the students can be too entranced with the creatures of the wild, says Burke. "We had a little girl who wanted to take a black widow spider home with her (saying) 'I'm sure my mom would let me.' "

On further reflection, he concludes, "That's great. That they realize that stuff is neat and not scary."