What is black, warty, musky and fetches $800 per pound wholesale?

The black truffle, a mushroom delicacy, is finding hospitable ground in North Carolina 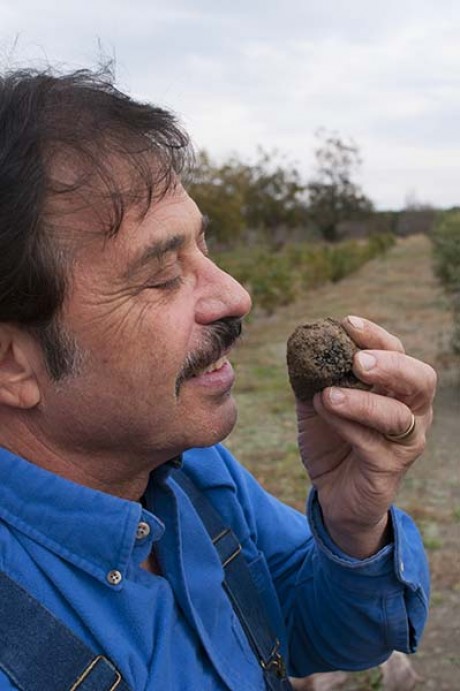 It looks and tastes nothing like your typical edible mushroom. And you won't find it in shrink-wrapped cartons on the produce aisle. Named for the region of France where it grows naturally, the gourmet Périgord black truffle is elite. A pound is worth about $800 wholesale, and the supply of this robust-flavored mushroom has yet to meet the worldwide demand. Many chefs and fine diners can't resist the black truffle's allure, nor can some entrepreneurs, many of whom sink their fortunes into farming this delicacy. Some of those farmers are members of North Carolina's electric cooperatives.

Franklin Garland of Hillsborough (a member of Piedmont EMC, shown at left) was the first person in the state to experiment with truffles, and he is widely credited with producing the first commercial supply of black truffles in the U.S. in 1993. A truffle is the fruit of a fungus that grows only in a symbiotic relationship with the roots of certain species of trees like hazelnuts and some oaks, including English, downy and holly oaks. The fruit contains spores that help the fungus reproduce. Black truffles look a bit like homely potatoes, with black warty skins. They grow underground, as deep as 6 inches down.

Black truffles have a unique taste that is married to a pungent, musky aroma. These combine to create a gastronomic sensation that is wholly unique. People describe it as nutty, fruity, musky or earthy. Its texture also sets it apart from other mushrooms. Where traditional commercial mushrooms are spongy, a fresh truffle has a crispy, crunchy bite. Truffles can be served fresh or lightly cooked in sweet or savory dishes.

Garland had been growing hothouse tomatoes with his brother in the 1970s. In 1979, he read an article about how the French had learned to successfully cultivate the black truffle, which has become scarce in the wild, by inoculating the roots of host trees with truffle spores, then planting the trees in orchards. Their work would ultimately open the door to would-be truffle growers around the globe. Garland decided to give it a go, ordering some inoculated trees from California. He planted them in 1980 and dug his first truffle 12 years later. He markets his black truffles, which are in season during winter, mostly through a broker. But he also sells locally to chefs and foodies. In 1997, Garland decided to start a commercial nursery, selling trees he inoculates himself. He sells about 30,000 each year.

As seen on TV

Many of today's North Carolina truffle growers got their starter trees from Franklin Garland. Jane Morgan Smith of King, Stokes County, was among them. She and her husband planted some truffle-inoculated trees on their farm in 2000 and harvested their first truffle in 2006. It typically takes four to six years before trees produce truffles. Smith sells her fresh truffles to local chefs and also markets a line of homemade truffle products — truffle butter, truffle honey, truffle salt and truffled white chocolate.

Smith and Garland attracted the attention of Martha Stewart, who came to the Smith farm in the winter of 2007. Stewart tagged along while Smith and her specially trained truffle hunter, a border collie named Friday, searched the orchard. When ripe, the black truffle emits a pungent, musky odor that attracts burrowing animals, which eat the truffle and disperse the spores. Wild sows are particularly attracted to the scent, which mimics the chemical that male boars produce to attract a mate. Domesticated pigs were traditionally used in Europe to root out truffles, but in most places they've been usurped by dogs, who also have superb noses, are easier to handle and not interested in stealing the goods.

After the hunt at the Smith farm, Franklin Garland appeared on Martha Stewart's TV show, showing the domestic diva how to make a truffle omelet. Fresh truffles have a short shelf life — within two weeks, the flavor has gone. Homegrown truffles can make it to America's plate much faster than imports, which may take 48 hours or more to reach chefs here. Though the fungus is perennial, truffles are an annual crop. They begin forming in spring and ripen from late November to early March in North Carolina.

Jane Morgan Smith, who is the director of the North American Truffle Growers Association, estimates that at least 75 growers have planted orchards in North Carolina at one time or another. But not all of them have produced or are producing truffles. Garland says the failure rate is high, mostly because would-be truffle farmers neglect their young trees. "It's hard work," he says. "The care of the trees is critical the first few years." The black truffle likes the temperate climate in most of North Carolina, anywhere the ground doesn't freeze hard. Truffles thrive in loamy or well-drained clay soils, which must be amended with lime to reach a very high pH (between 7.9 and 8.1).

The biggest threat to growers is the Eastern filbert blight, which has ransacked European hazelnuts, the staple tree of many orchards. Drought and excessive heat can also threaten young orchards, and small burrowing mammals like squirrels, skunks, chipmunks and voles may devour a crop. Smith says she has harvested only 10 pounds of black truffles since 2006. She'd hoped for 10 times that amount by now.

Aiming for the Big Time

Garland says 50 to 75 pounds per acre would be optimum truffle production — one tree produces no more than two pounds per year. Few other farms in North Carolina are coming close. At least two entrepreneurs want to step up the game. One of them is Susan Alexander of Southern Pines, who has planted 21,300 trees on 150 acres. The other is Patrick Fiorentino (a member of Surry-Yadkin EMC), who has in essence plopped a high-tech laboratory right next to his orchard in Dobson.

Fiorentino has planted 5,000 trees on 10 acres, which he calls his "proof of concept" orchard. He doesn't hesitate to yank out trees to confirm the presence and degree of fungal development, and he recommends that growers scrutinize any trees they buy that are advertised as being inoculated with black truffles. Fiorentino is heavily invested — he has bought DNA sequencing equipment and pays a full-time orchard manager. He is scrutinizing the genetic makeup of both the fungi and potential host trees. His hope is to develop a "cookbook" method for truffle growing. "I intend to be the Tyson Chicken/Reynolds Tobacco of truffles," he says.

Alexander has equally grand designs — she says she aims to be the biggest and highest-producing truffle orchard in the country. While she waits for her trees to bear fruit, she buys truffles and makes and sells gourmet products, mostly notably truffled popcorn. Alexander has sunk millions into her enterprise, and says she can afford to fail.

Others aren't as lucky. Jack Ponticelli ran a successful business in New Jersey selling hot-air balloon rides. In 2000, he pulled up stakes and bought some farmland in North Carolina. He has two orchards on the Surry-Yadkin EMC electric system, one in Surry County and the other in Yadkin County. He and Garland are minor business partners. Ponticelli says he spent his life savings planting close to 15,000 hazelnuts and oaks he bought from Garland. He's lost many trees to deer, drought and cold weather, and some 60 percent of his hazelnuts are now succumbing to blight. He expects the affected ones to survive only about two more years, but should still be able to harvest some truffles in the meantime. "This was supposed to be my retirement," says Ponticelli. "I hope I live more than two years." Jokes aside, Ponticelli believes he'll recover some of his investment and he hopes to eventually help mentor beginning truffle growers, pointing out the pitfalls. "I do believe that truffles could replace tobacco in North Carolina, eventually."