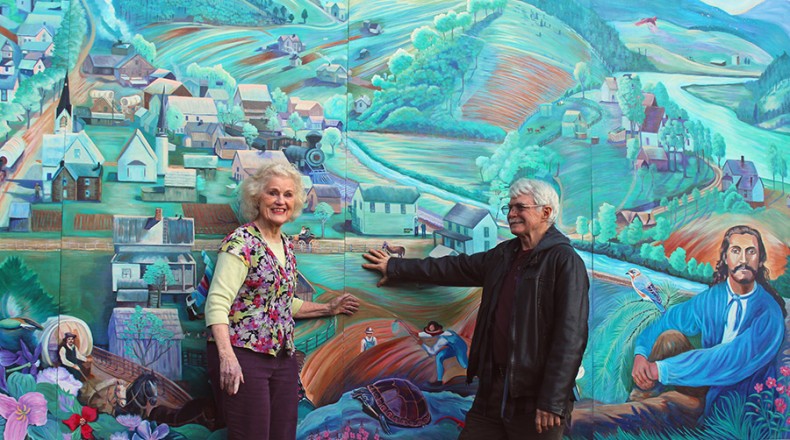 Doreyl and Jerry Cain with the mural “On Hallowed Ground” she painted in Dillsboro.

You could call them drive-by history, the more than 45 murals that grace downtowns across western North Carolina that are the Appalachian Mural Trail. Most have been in place for years; others have been recently restored or even created from scratch by artists who want to preserve the history and beauty of the region.

“As a vital part of Appalachian culture, storytelling has kept our history alive,” says artist Doreyl Ammons Cain, who with her husband, Jerry, created the Appalachian Mural Trail by linking murals through an interactive online itinerary and a printed brochure. “Historical public mural art really showcases life here through huge colorful images that capture and preserve our heritage for future generations. It’s storytelling in a really big way.”

Their vision took shape in fall 2016, when they set out to locate and catalog existing murals within a one-hour drive of the Blue Ridge Parkway. “So many people travel the parkway — more than 15 million a year — and we saw this as an opportunity to encourage people to take side trips to the nearby towns and communities. Several of these towns really needed an economic boost, and this just made sense.”

Doreyl grew up in Jackson County, but she never lost her love for the mountains. After high school she headed to California for a stint in the Air Force, college on the GI bill to earn a masters’ degree in biomedical illustration, and to found various marketing and advertising agencies. In the late 1980s, she moved back to her home state.

Along the way, Doreyl began to work with smaller towns to develop festivals and community events. In 2010, she produced Dillsboro’s ColorFest, a juried arts and crafts event showcasing Appalachian crafts and fine arts. Two years later she created a mural in 2012 in downtown Dillsboro. Called “On Hallowed Ground,” it tells the story of the founding of the town. It’s 16 feet long and 8 feet tall and features images of town founder William Allen Dills and Chief Nimrod Jarrett Smith of the Eastern Band of Cherokee.

“You could say that this was the beginning of the mural trail, but it was several years before Jerry and I got really serious about it,” she says. “Now, we engage people around the state to help us with ‘mural spotting’ to find more murals to add to the trail. And Jerry does all the work on the website to detail each mural’s history, along with GPS locations, milepost markers and other information. We really wouldn’t have the Appalachian Mural Trail without him.” 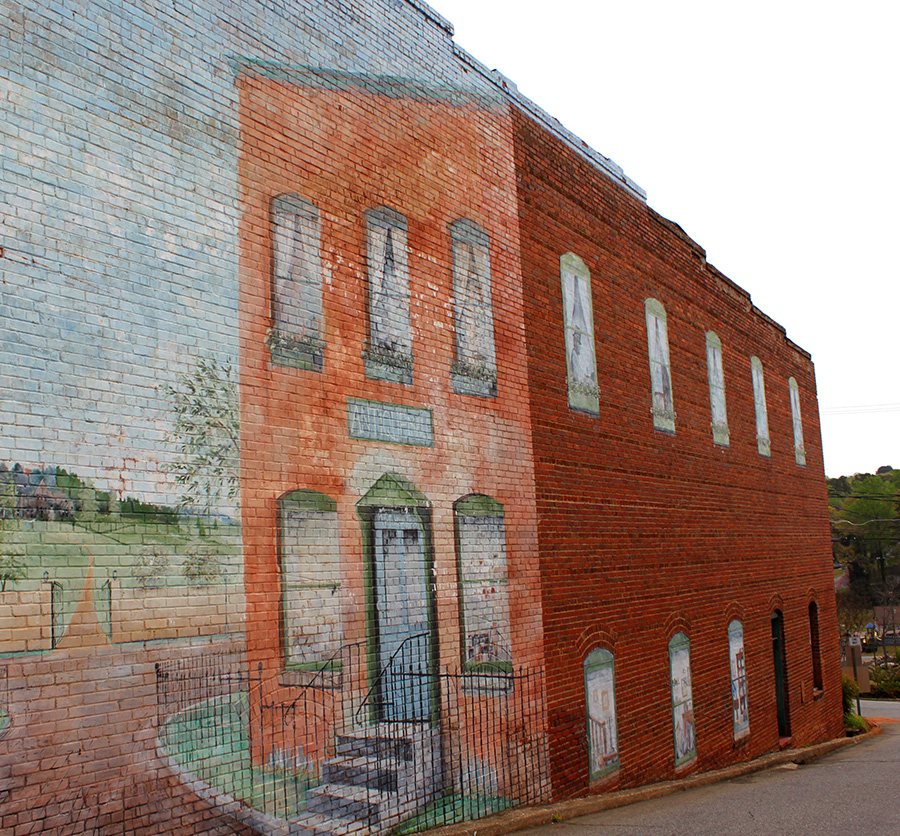 Stops along the trail

Visitors to the site, muraltrail.com, can explore each mural in full color, read about the background of the scene pictured, create personalized itineraries for trips, post selfies in front of murals along the way, and in the process learn tidbits about history.

The murals are owned and maintained by governments or community organizations.

The Appalachian Mural Trail is constantly evolving. Here are highlights from a few stops along the trail:

In 2011, Asheville officials enlisted artist Molly Must to create a mural in Triangle Park. Collaborating with Just Folks Organization and the Asheville Design Center, Molly depicted the stories of this historic African-American business district on two sides of Triangle Park, encompassing Valley Street and East-End, also known as “The Block.” From community discussions, archives, family stories and photographs, the mural celebrates historic institutions and people of the area. It was completed in 2013 with help from VISTA/AmeriCorps volunteers.

Doreyl also worked with Asheville officials to create “Golden Threads,” which tells the story of the history of music and the area’s musicians. The main panel is complemented by several others including “Shindig on the Green,” an event that showcases mountain music. 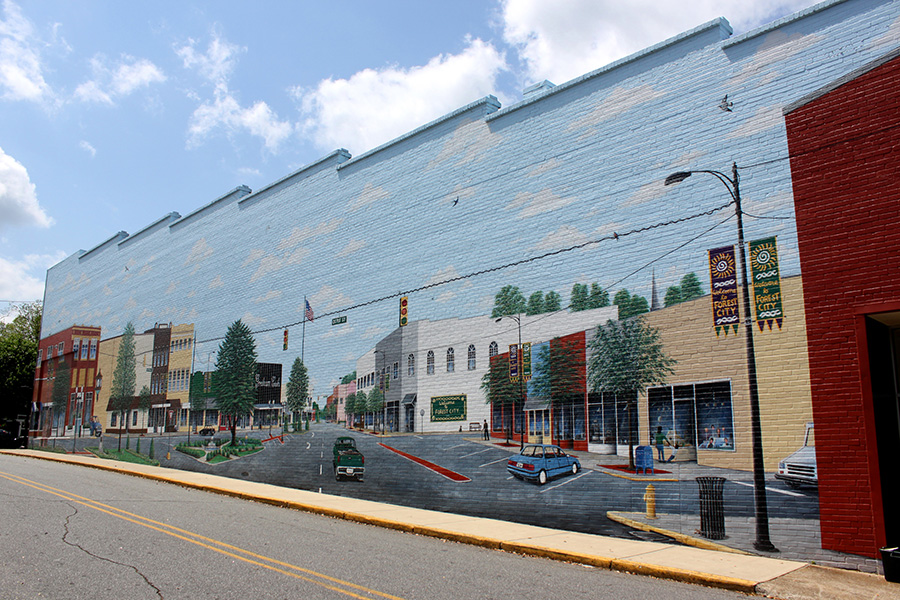 Forest City’s original Downtown Mural was painted by Clive Hayes in 2000 at the request of city officials. It depicts a downtown streetscape, but when visitors look closely, they can spot hidden objects Hayes interspersed to add interest and a hide-and-seek element. The mural was restored in 2011.

Boone’s post office is home to “Daniel Boone on a Hunting Trip,” commissioned through a Federal Arts Project program that took place from 1935 to 1943. Part of the New Deal, the project created jobs for artists through the Works Progress Administration. Hundreds of works of art were created, but many have fallen into disrepair or been removed. Painted in 1940 by Alan Tomkins, the mural was restored in 2014 by David Goist. It’s the only surviving WPA mural in northwestern North Carolina. The Appalachian Mural Trail is looking to place more New Deal murals on the trail. 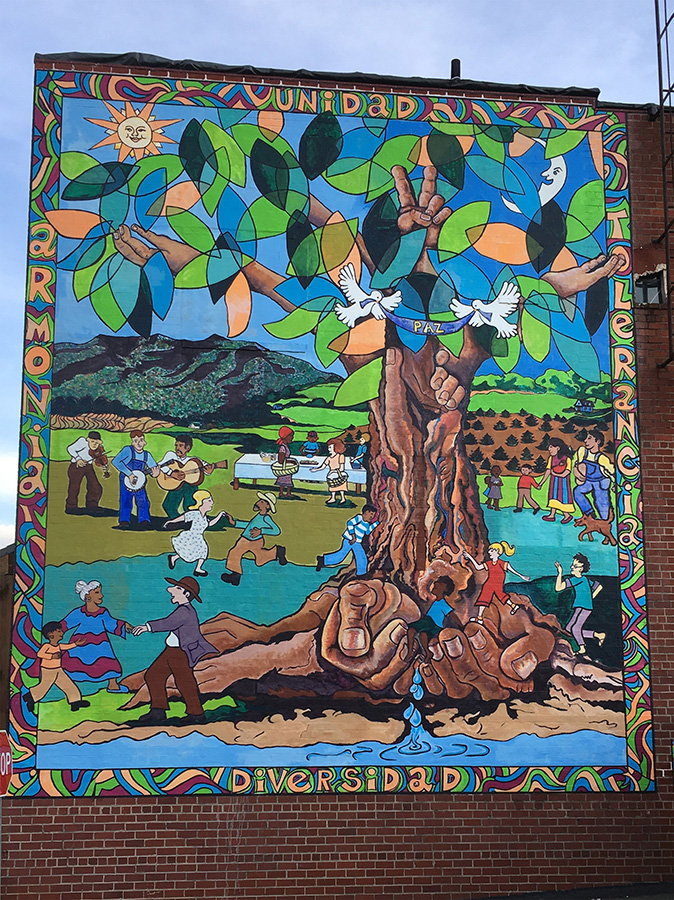 Unity in Diversity in West Jefferson was painted in 2006. The project was spearheaded by Winston-Salem artist Marianne DiNapoli-Mylet who enlisted students from Ashe Middle School to create a work that showed the diversity of the people who work and live there. It’s a prime example of community support, funded by an Arts in Education Residency Grant from the North Carolina Arts Council, Handmade in America, the West Jefferson Community Partnership and the Ashe County Arts Council. 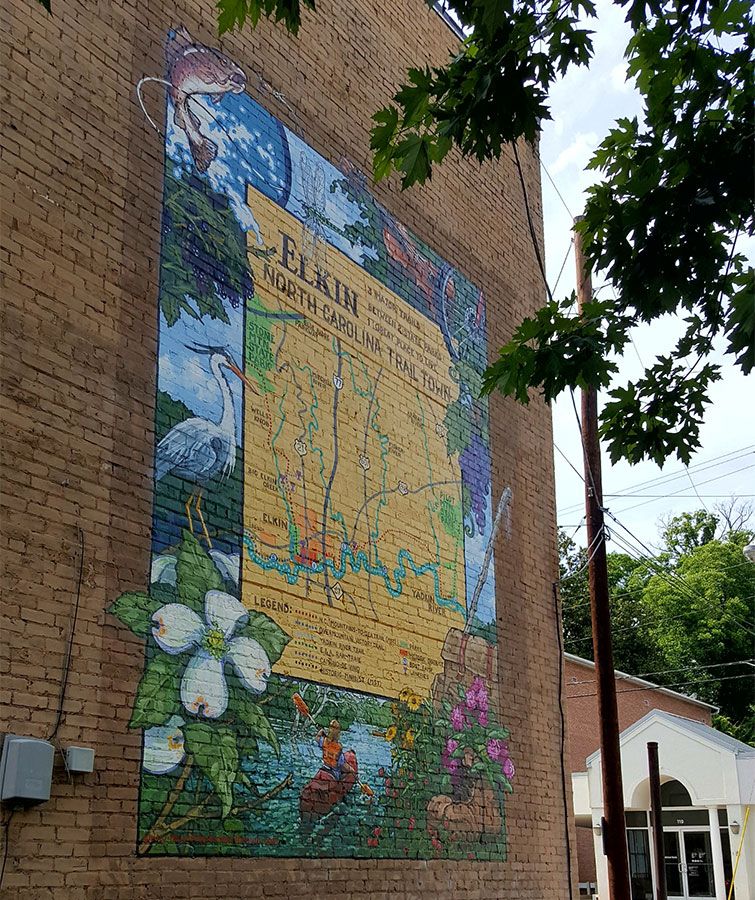 Artist Michael Brown conceived “The Trail Town” mural for Elkin. Located at the confluence of the Yadkin River and Big Elkin Creek, the town’s history reaches back to the Paleo-Indians 10,000 years ago. The mural traces various area trails and landmarks. It is highlighted on Elkin’s Trail & Towns Excursions downtown walking tour brochure.

One of the most unusual additions to the trail, Flowering Bridge Living 3D Mural in Lake Lure, was created by Lake Lure artists Veryle Lynn Cox and Amy Wald in 2015. The Lake Lure Artists Club and community volunteers helped with the installation along the 350-foot garden trail in 2015, adding whimsical artwork and statuary among the 700 species of plants there.

Doreyl and Jerry have begun two new projects: a mural trail in Virginia and a “Gateway Cities” initiative to draw visitors from major cities to the parkway and the mural trails. Appalachian Mural Trail works with governments, community organizations and private citizens. The work is funded through donations.

“Murals are art for the people,” Doreyl says. “They tell the stories of average people, daily life, significant events, and those not so important. Murals are right there, in your face for all to see. They’re historic, artistic and a way for people to celebrate the lives and times of their predecessors. Murals give artists a broad audience way beyond the people who see their works in galleries and museums, and they help bring people together to learn about the history and beauty around them.”

In addition to the Appalachian Mural Trail, mural projects across the state speak of public pride. Our story Local Art for All to See shares a few resource to help track down other pieces of public art across the state.