This "Story" is All About Blue Crabs

By Story and photos by Leah Chester-Davis unless otherwise indicated 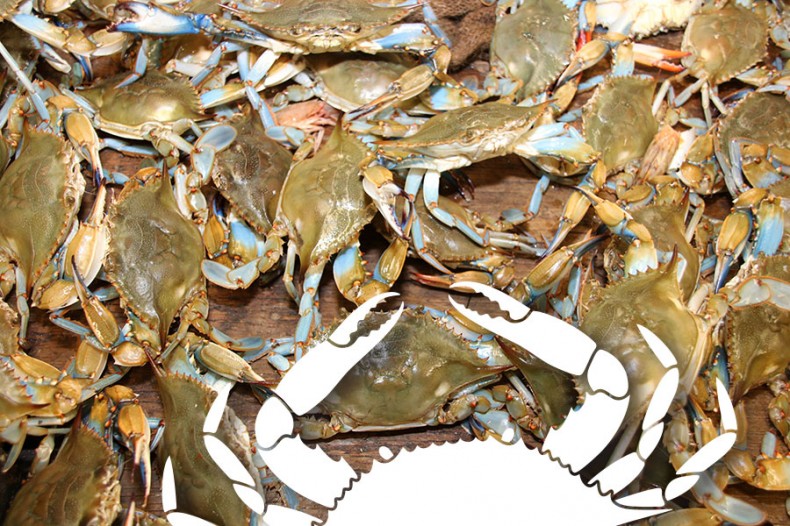 Most mornings every week during the blue crab season, Rebecca Story, a member of Albemarle EMC, welcomes the first light of day as she eases her boat into the Yeopim River at Millie Henry’s small fishing center ramp. It’s located down a quiet back road in the Bethel community in Perquimans County. 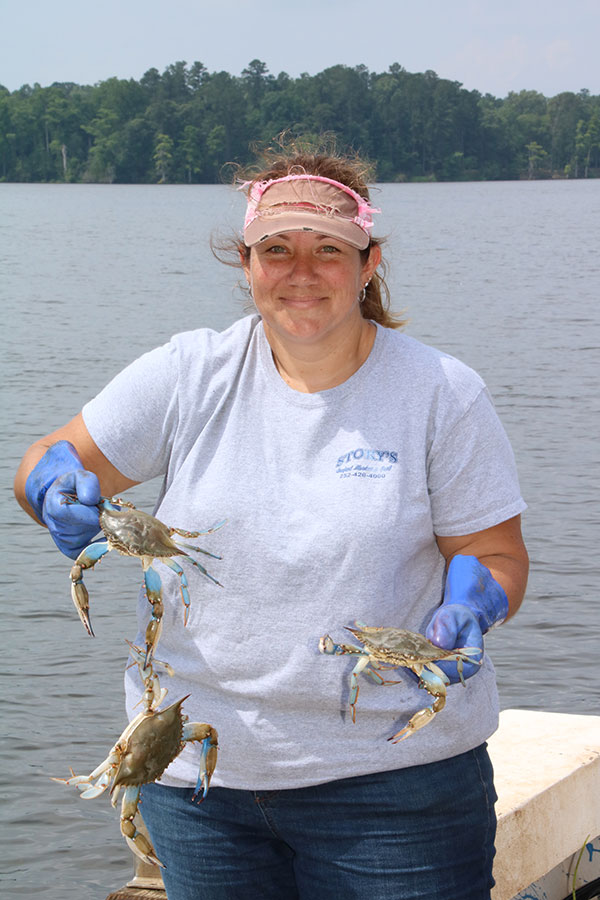 Rebecca Story has fished these waters since she was three years old.

A lone cypress dripping with Spanish moss stands nearby in the water, a sentinel of sorts, helping mark the fishing center from the long expanse of tree-lined shore. From there, Rebecca heads out to the Albemarle Sound to check about 250 of her 600 crab pots in her daily routine. She likes to be on the water by 6 a.m., heading to an area where white and green buoys, clearly marked with her name and boat registration number, bobble in the expanse of water. Crabbers must check their pots at least every five days, a legal requirement of the North Carolina Division of Marine Fisheries.

Rebecca has fished waters at the confluence of several other rivers, including the Chowan, since she was three years old, learning on her father Richard Winslow’s boat. Even so, she carefully uses GPS when she sets pots in an area that covers several miles. Her boat is loaded with tools of the trade: roughly 20-inch x 24-inch wire crab pots, boxes that hold harvested crabs, and bait — she uses either shrimp heads or what she calls fatback or Atlantic menhaden. Some call it bug fish.

It’s physical work, baiting the pots and tossing them overboard, hauling in the catch and dumping the large wire baskets into the boxes she uses to collect each day’s catch, but Rebecca relishes her early mornings out on the water. For Rebecca, the waters along the North Carolina coast represent more than a livelihood, they help compose her life.

Blue crab season can last much of the year, but is usually at its peak from May through October. Rebecca’s catch of blue crabs — common in the state’s coastal waters, especially in the Albemarle and Pamlico sounds — will be shipped up the eastern seaboard to Ocean City, Maryland. From there the crabs may go to restaurants and markets in New York City. A few will end up in the fresh seafood market located in her new restaurant, Story’s Seafood Market and Grill in Hertford. Before the crabs are shipped, they are graded according to size.

Rebecca has a strong sentimentality for all things family. She includes her children, Andrew, age 15, and Lizzy, age 18, in various tasks and jobs in her growing list of enterprises. Thomas, age 20, works at the Naval Shipyard in Norfolk, but works with her on the boat on Saturdays.

“They can’t say they don’t know how to work, so whatever they do, I’m pretty sure they will be successful,” she says.

Rebecca’s soft-spoken nature belies her busy schedule. In addition to her crabbing business, she also owns a childcare center, and she has plans to expand the restaurant and add an outfitter and supply store for fishers. She is also involved with activities in her church and community. 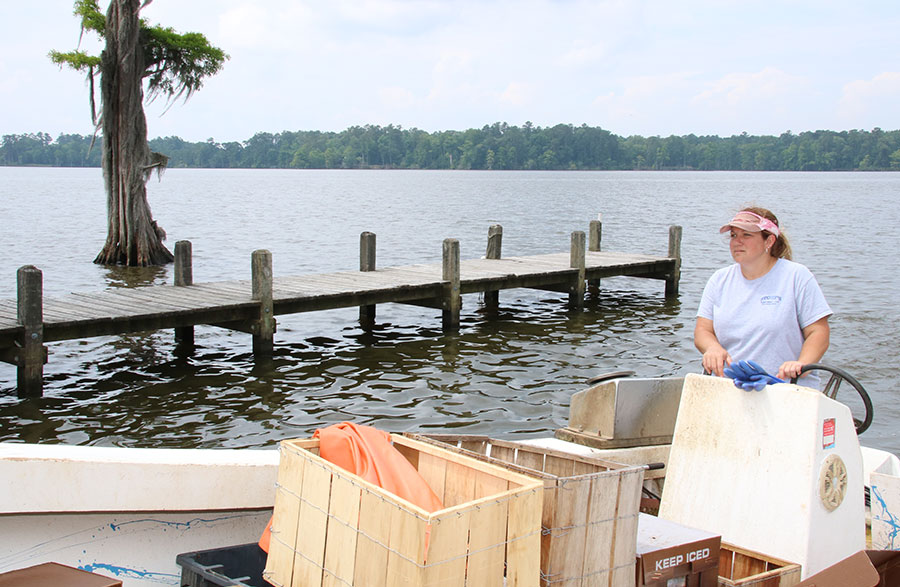 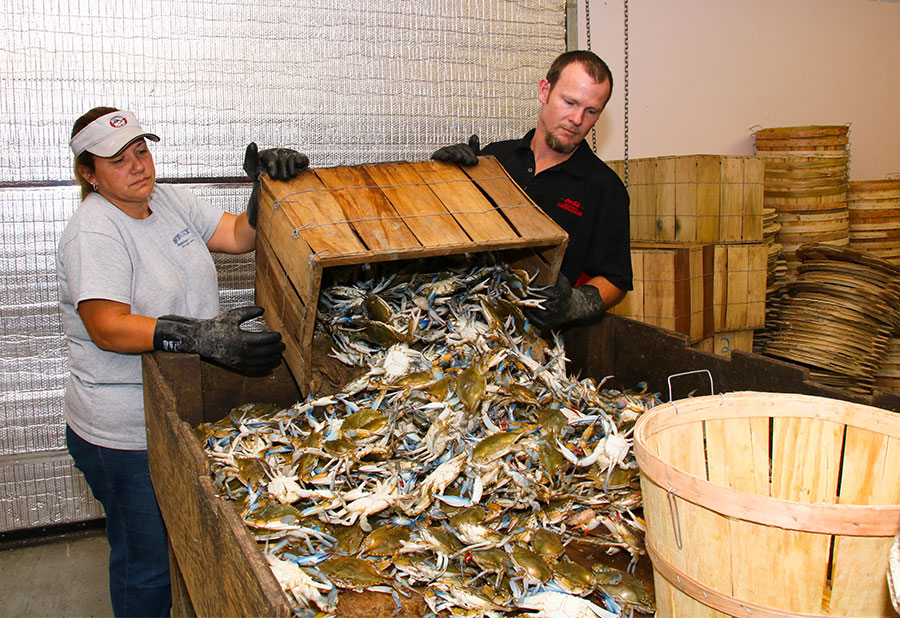 Rebecca and Paul dump blue crabs onto the grading table.

The seafood market includes the fresh-caught crabs along with other locally caught fish and shrimp from other fishers. It also includes some items, such as Atlantic salmon, which is sourced elsewhere.

The restaurant features typical fried seafood fare along with occasional features such as grilled shrimp and cheese risotto, and steamed crabs.

“Most everything in the restaurant is tied to family,” Rebecca says.

Her husband, Paul, who helps grade crabs after signing off each day from his regular job, developed the egg wash mixture that seafood is dipped in, keeping it light and letting the seafood flavors shine through. The tangy slaw is Mom LaRue’s recipe. Rebecca developed the hushpuppy mix and the recipe for the coconut shrimp. The crab bomb recipe is one she developed for a local festival, where it was a hit.

“We couldn’t keep them, and people started asking if I would make them on the side.”

They are now a popular appetizer on her menu.

While her many inland ventures keep her busy, it’s those solitary mornings out on the water where Rebecca thrives.

“I love it. To me, you’re away from everything,” she explains. “If anything goes wrong, there is nothing you can do about it because even when it’s rough out there it’s peaceful. I always feel like when I’m out there, it’s me and God. And nothing else matters. I love everything about it.”