More than 2.6 million turkey feathers have been donated for ceremonial use

Although the National Wild Turkey Federation started The Zuni Feather Project, Mike has carried on the tradition.

Mike Davis, a member of Four County EMC, is an eclectic curator. His house in Elizabethtown is a collector’s paradise, filled with sports cards, vintage bottles, German war memorabilia, all things turkey-related, and more. While he says he can’t put a dollar amount on his collections, he knows some items are quite valuable (like his Michael Jordan cards and the Johnson Brothers’ antique platters). Mike’s enjoyment, however, comes from cultivating the collection, not the monetary value. And there’s one collection he continually gathers solely to give away — wild turkey feathers. 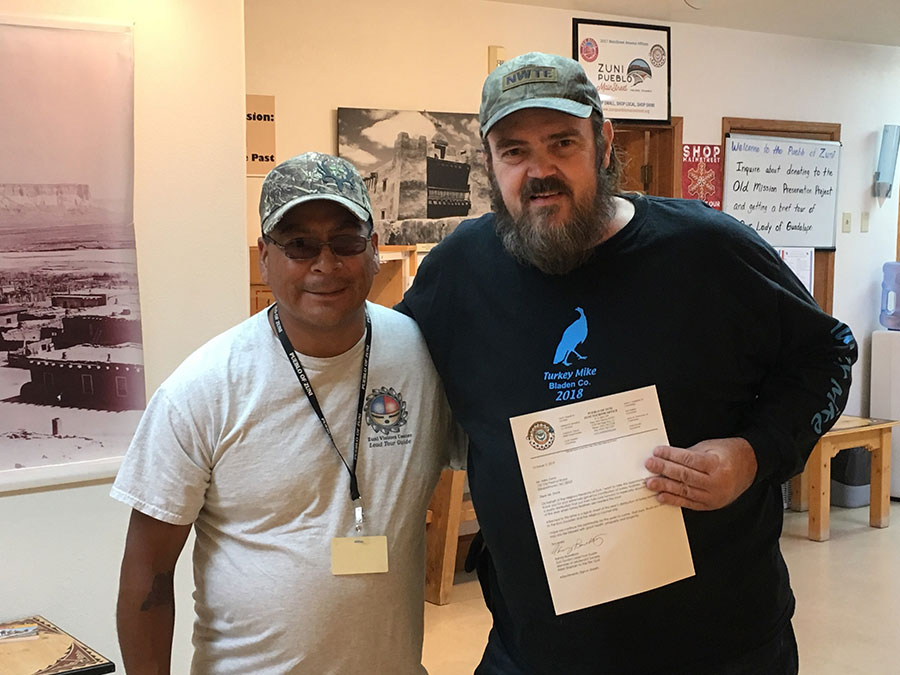 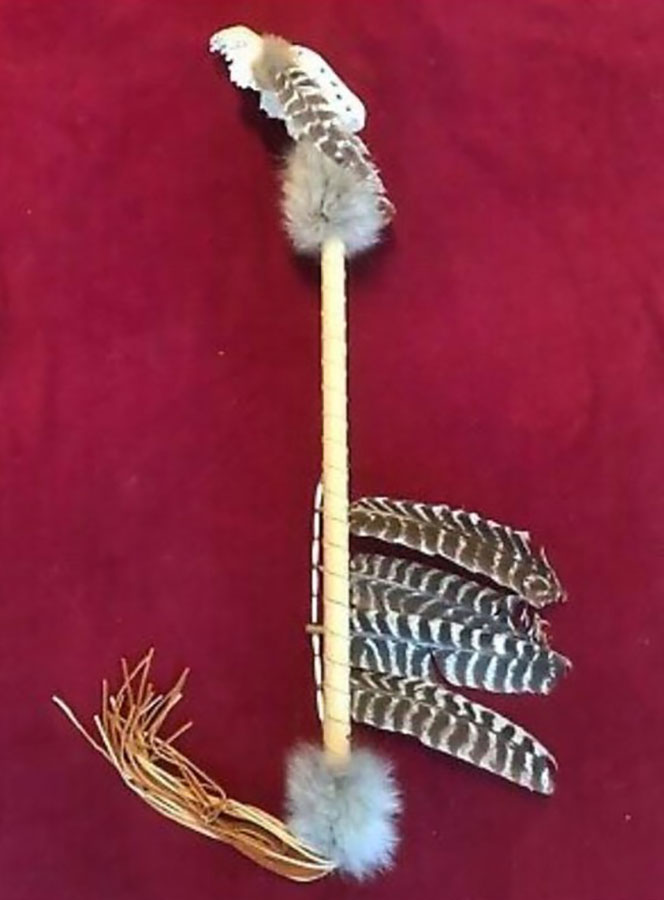 Above, top: Mike Davis (right) was honored by the Zuni for donating more than 2.6 million turkey feathers to their tribe. Above, bottom: An example of a prayer stick, similar to the type used in Zuni religious ceremonies.

Mike has devoted almost 20 years to collecting then donating wild turkey feathers to Native American tribes in need. These tribes use the feathers in important religious ceremonies, and Mike’s assistance helps them keep their traditions alive.

Collection for a cause

Mike has always called Bladen County home and grew up turkey hunting; it’s a part of who he is. He hunted turkey with his father and enjoyed carrying on the tradition with his son, now in college. He has been a member of the National Wild Turkey Federation (NWTF) since 1997, an organization devoted to “the conservation of the wild turkey and the preservation of our hunting heritage.”

In 1999, while reading its bi-monthly newsletter, “The Turkey Call,” he read an ad about the Zuni Feather Project that started his collection for a cause.

The Zuni Tribe, a Native American tribe located in New Mexico, is the largest in the Pueblo nation. The agricultural-based Zuni have always used the feathers of wild turkeys in their sacred ceremonies, and continue to use turkey feathers in ceremonies throughout the year, as well as in daily life.

However, the turkey population in the region isn’t large enough to provide the number of feathers needed for these traditions. The Zuni turned to the NWTF for help, and the result was the creation of the Zuni Feather Project. This project was truly turning one person’s trash into another’s treasure. Members were asked to donate their wild turkey feathers to the NWTF, who then forwarded them to the Zuni and other tribal nations in need.

The official NWTF project ended in 2008, but that hasn’t stopped Mike. He continues gathering the feathers, sorting and storing them in his shed. Mike now averages 250,000 feathers per year, equal to 100 birds. Every October, he loads up the boxes in his trailer and makes the long drive to New Mexico.

“I love history and I know how important these feathers are to the Zuni nation. I consider it an honor to help them carry on the traditions of their ancestors.”

“I love history and I know how important these feathers are to the Zuni nation,” Mike says. “I consider it an honor to help them carry on the traditions of their ancestors.”

Word of Mike’s arrival to the reservation spreads quickly, with the announcement, “The feathers have arrived!” Roads are then blocked off to accommodate the hundreds of tribal members who line up for the feathers.

Mike has now donated over 2.6 million feathers and has been honored by the Zuni for his efforts. How does one man collect so many wild turkey feathers?

Mike participated in the project every year, enjoying helping his fellow man. 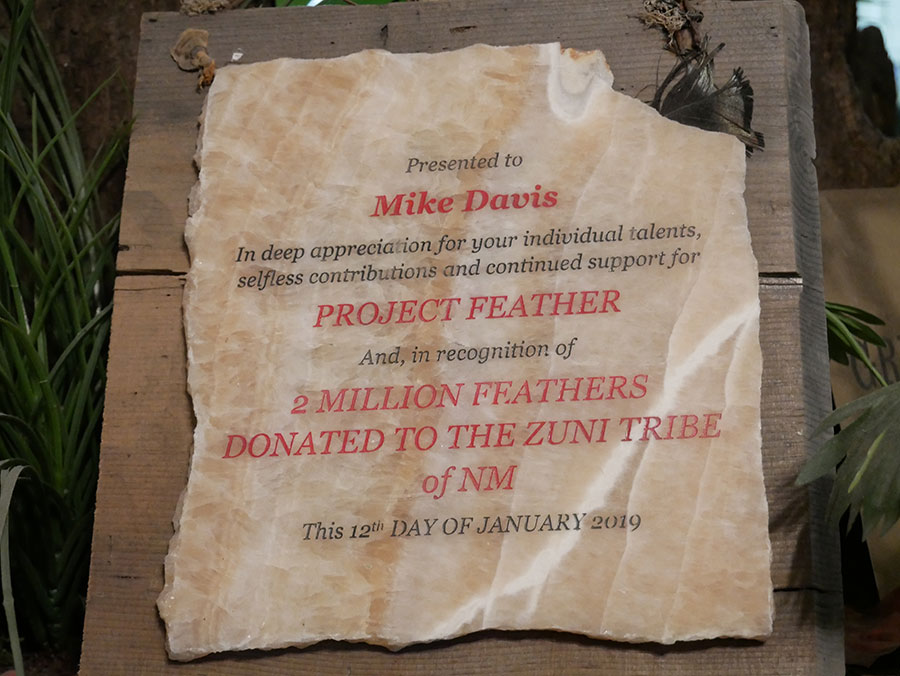 News of his project has spread throughout the Bladen County area over the years, and now people will approach him and say: “Are you the feather guy?”

Last year was a little different due to the COVID-19 pandemic. A spike of positive cases caused a quarantine of the reservation, but that didn’t stop Mike. He boxed up his wild turkey feathers and shipped them via UPS, at a cost of hundreds of dollars. Mike admits it was less expensive than making the trip to New Mexico, but he missed seeing the people he now calls friends.

“When I arrive every October and see the joy when they get something they need and may not otherwise get, I am satisfied,” he says. 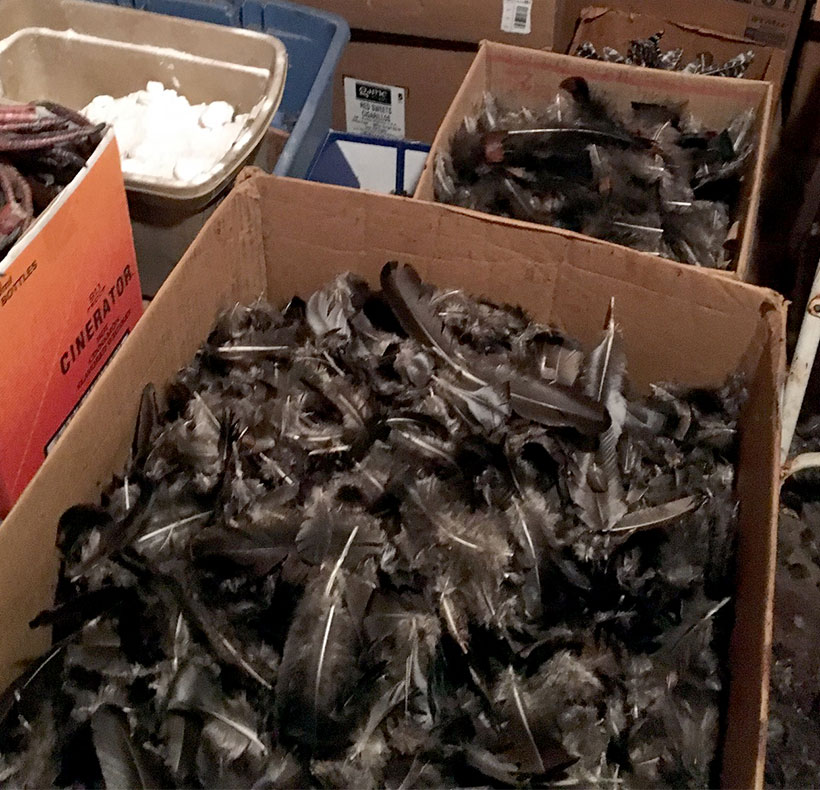 If you are interested in donating wild turkey feathers for the Zuni Nation, contact the Indian Pueblo Cultural Center in Albuquerque, New Mexico, at 866-855-7902.

Janet Smith is a communications specialist at Four County EMC and editor of the Four County Connection monthly newsletter.