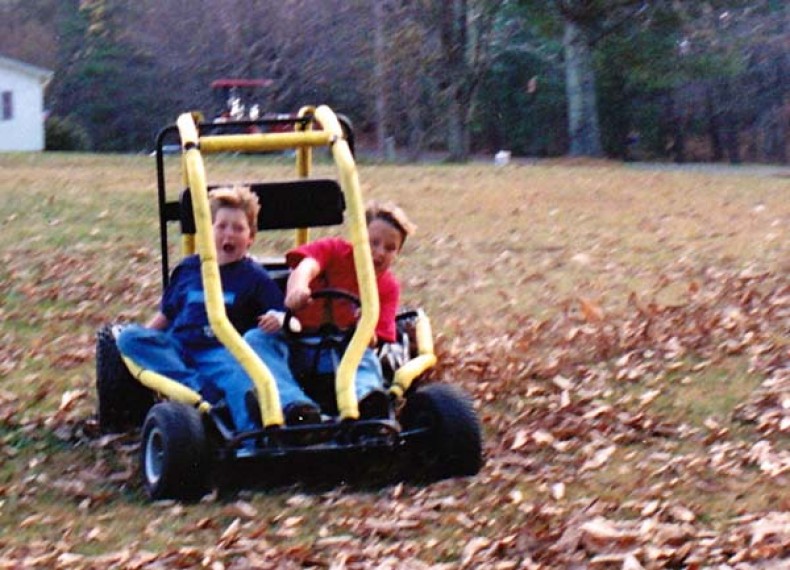 Whenever we played "Dukes of Hazzard," I had to be Luke, but whatever.

I can remember it like it was just yesterday. It was 6 a.m. and, of course, my older brother Josh had me up as soon as his feet hit the floor. There was no delicacy to his methods of waking me. His usual course of action was to blindly throw a pillow in my general direction hoping to hit my face or some part of my body. Waking me was his only goal, and it didn't matter how. Even though the impact of whatever object he threw at me stunned good and hard, all was forgiven this time: it was Christmas morning. It was his job to wake me up. The sibling code states that whichever sibling is the first to rise on Christmas morning must wake up everyone else. We didn't write the law; we just lived by it.

We rushed into Mom's and Dad's room to wake them up, but it was always like pulling teeth. After they purposely took a lifetime to come out, we all gathered around the tree, prayed as a family, thanked the Lord for His son and the purpose of the day, and then started opening presents. Josh and I received the usual allotment of clothes, socks and embarrassing matching sweaters. We usually got a toy or two, but this time none were to be found. It also appeared that Santa had mixed up his route and forgot to drop in. Josh and I assumed we had been left bags of coal. Talk about a boy's world crashing down on top of him. At the resourceful age of 9, I already began convincing myself that coal would come in handy for cookouts. But who was I kidding?

When it seemed like all hope was lost, Dad piped up: "Hey, boys, what's that outside?"

Josh and I looked at each other then darted for the door. I peered through the glass and there it was: a go-kart.

Sitting on a blanket of snow was a 5.5hp go-kart that made NASCAR stock cars look weak. Before me was a chariot of adventure. That yellow beauty was everything I could have asked for. It was Richard Petty's racecar, a monster truck, and an army tank all rolled into one. It became the General Lee whenever Josh and I played "Dukes of Hazzard." (I always had to be Luke, but whatever.) It was the Batmobile whenever Josh and I played "Batman & Robin." (I always had to be Robin, but whatever. You see the pattern there.)

Josh and I wore the tires off of that machine and all the grass off the yard. Every evening when we hopped off the school bus, we headed straight for our go-kart. Josh would flip on the switch, I would yank the pull-start motor, and off we'd go. Dad couldn't keep enough fuel around the house. We would often get in trouble for stealing the lawnmower gas and putting it in the go-kart, but when you are in the middle of running from Sheriff Rosco P. Coltrane, you don't have time to rationalize about which gas can is off limits.

We simply had the need for speed. Even though it topped out around 30 mph, we spent our time trying to convince our friends that our go-kart could go 80 mph. I still believe on some level that it actually could.

I spent hours upon hours of my childhood screaming my head off while riding shotgun with Josh in our little yellow go-kart. We lived and breathed for the time spent behind the wheel. And to this day, there are still parts of our yard where grass simply won't grow.