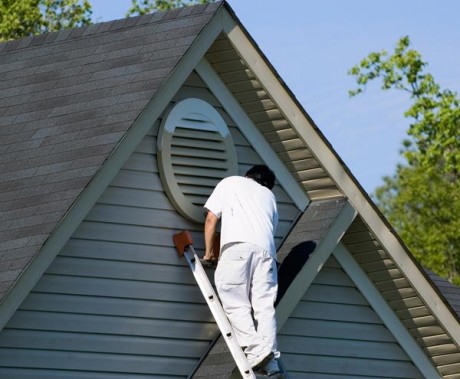 A new series of insulating paints promises energy savings by simply painting the exterior of a building. But do they really work?

Some insulating paints promise up to 40 percent energy savings when applied to exterior walls. Typically, insulating paints (also called “nanocoatings” by some vendors) are designed to be applied to a building’s exterior with the goal of reflecting radiant heat energy. These types of radiant barriers have shown to provide benefits when properly applied to roofs (particularly in sunny areas with large cooling loads), and there are a number of Energy Star-qualified products that can be used for this purpose.

However, radiant coatings for roofs are different than paints that are to be applied to exterior walls. To date, there has not been any definitive research showing that adding such coatings to exterior walls is a cost-effective way to reduce building energy use.

For example, numerous coating manufacturers advertise an “equivalent R-value” of their coatings. R-value represents the amount of insulation needed to reduce conductive heat transfer across a surface.

In an example of the confusion that arises from heat transfer equivalence, one manufacturer claims that test results show that adding its 100-micron-thick coating to a four-inch concrete and plaster wall decreased the thermal conductivity across that wall by nearly 30 percent.

In other words, the manufacturer claims that the coating reduced conductive heat transfer by a significant percentage. Simply considering the scale difference between four inches of concrete and 100 microns of paint should illustrate why claims like this should be met with extreme suspicion.

Actually, the R-value of coatings is typically quite low. If a coating were applied to a depth of one inch, it might be able to achieve the insulating properties of, say, one inch of fiberglass-batt insulation or rigid foam. But even that’s unlikely given that a coating doesn’t contain the gas voids that give insulators their insulating properties.

Because coatings are applied in a thickness measured in microns, not inches, they simply cannot affect conductive heat loss from a building in any appreciable way and are not directly comparable to traditional insulators on an R-value basis.

The best energy efficiency improvements are often the simplest and most common. Turning lights off when leaving a room, sealing windows and doors and cleaning refrigerator coils aren’t as much fun as buying a shiny new appliance or product. But these simple, low-cost actions are proven ways to save energy and increase comfort.