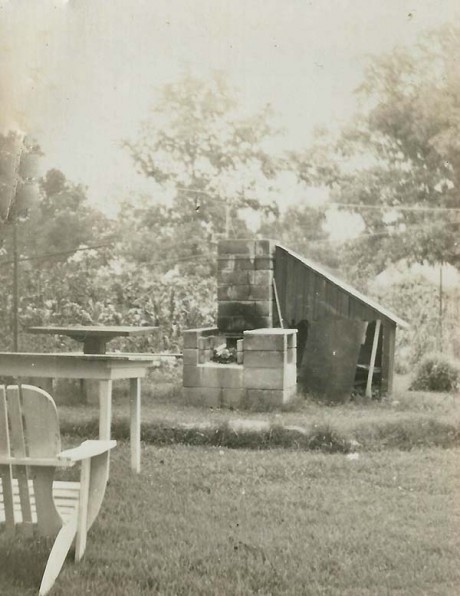 Papa Tom fired this grill with hardwood scraps from the handle mill in Plymouth.

The oyster roast was the quintessential feed-a-crowd party when we were growing up in the 1950s and 1960s. Some of my earliest memories of family gatherings are of oyster roasts in my grandfather's backyard. Papa Tom built a backyard grill for oyster roasts and fish fries. It was constructed of concrete blocks. It had a chimney and a compartment on the side for storing wood. The cooking surface was large enough to hold two large steel pans. In those pans the oysters were covered with wet burlap bags for creating the steam that cooked them. The fuel for the fire was hardwood handle scraps from the True Temper handle mill in Plymouth. Papa Tom got the scraps delivered by the dump truck load.

When the oysters were "done," the men dumped them onto a long table and the feasting began. The only "sides" served with oysters were saltine crackers, melted butter and cocktail sauce. The only beverage I remember was Coca-Cola. My uncle worked at the Coca-Cola bottling plant in Plymouth so there was always a crate of Cokes at Papa Tom's house. The grownups had their own oyster knives and knew the art of shucking oysters. I wasn't allowed to handle the shucking knife, so Daddy usually shared what he shucked with me. There was no dessert. We believed eating sweets after oysters would make us sick. We also did not eat oysters in a month without an "r" in its name.

After my grandfather died we no longer gathered around the outdoor grill in his back yard. We still ate oysters, though. Every Thanksgiving and Christmas, Mama made a casserole she called scalloped oysters. It is a simple dish made of crackers, butter and oysters. Mama crushed the crackers and tossed them in melted butter. Next, she layered crackers and oysters in her Corningware casserole dish until she finished with a cracker layer on top. In the final step she poured the oyster juice over the crackers and oysters, adding enough milk to the juice for a full cup if needed. She baked it at 350 degrees for about 30 minutes or until the top was golden brown. I make no guarantees on this recipe. Now that Mama has passed away we all argue on whether or not she added Worcestershire sauce. I am sure she did not, but my daughters think she did.

Mama fried oysters on special occasions, too. She breaded them in flour, seasoned with salt and pepper and then let them "sit" in the refrigerator for a few hours. This sitting method was Mama's secret to crispy fried food whether it be oysters, chicken or green tomatoes. The funny thing is Mama did not like oysters, but she could cook them to perfection.

There is a little bonus to be found inside some oysters: tiny crabs that take refuge inside the shells. Once the oysters are cooked and you open the shell, you find these little critters cooked to a pretty pink color. They taste somewhat like shrimp.

Once my children were grown we started having our Christmas gathering on "Old Christmas" or the Saturday nearest January 6. We do our gift exchange and we have an oyster roast in my backyard. Now there are grandchildren and great-grandchildren so we have a nice little crowd. We like our cocktail sauce spicy, so we make our own concoction with enough horseradish to clear our sinuses, a little Texas Pete, lemon juice and catsup. There is also a bowl of melted butter on the side and plenty of soda crackers. We gather around the fire pit, which in true redneck style is made from a repurposed washing machine barrel, with the burlap-covered oysters steaming in a bucket on a rack across the top of the fire pit. The wood fire keeps us warm in the January air. We laugh and tell stories on each other, all the while shucking and eating oysters. We all declare that North Carolina oysters from Rose Bay are the best in the whole wide world, and every year is better than the last.

Find safety tips for storing and preparing oysters at nccatch.org.

Find oyster recipes from N.C. Department of Agriculture at ncagr.gov.