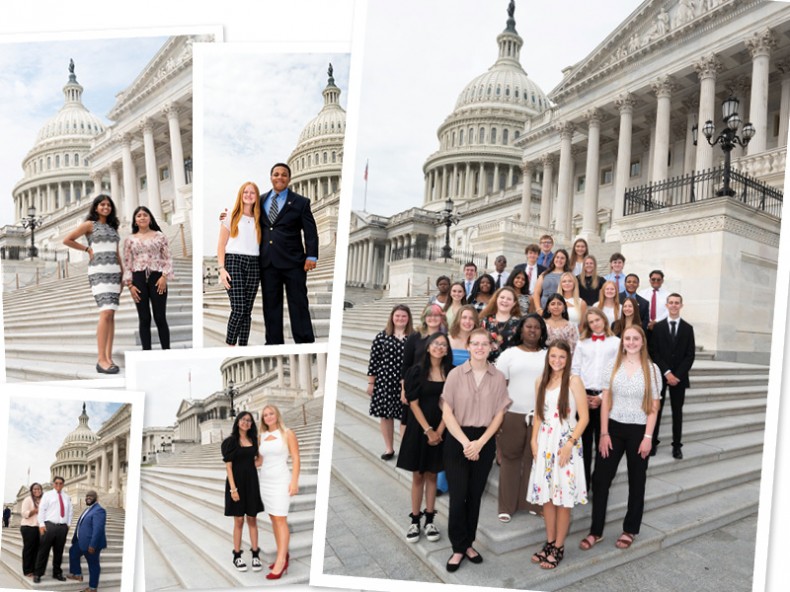 The scene has been playing out for decades: A group of North Carolina high school students, dressed in their best church clothes, gathers on the gleaming white steps of the Capitol Building in Washington, D.C. It’s hot and likely humid — even by North Carolina standards — but there’s an energy about the group that can’t be stifled. They pose for some photos and then head inside, where they’ll learn about the building’s 200-year-old history first-hand, and meet senators and members of Congress face-to-face. 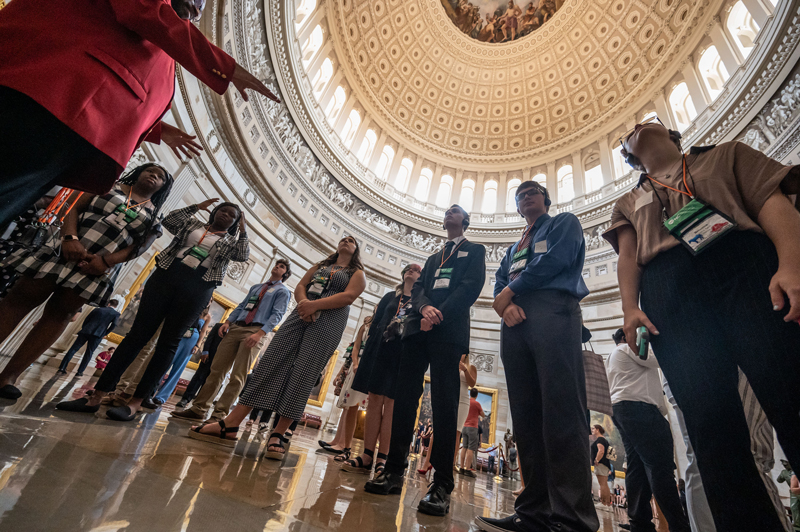 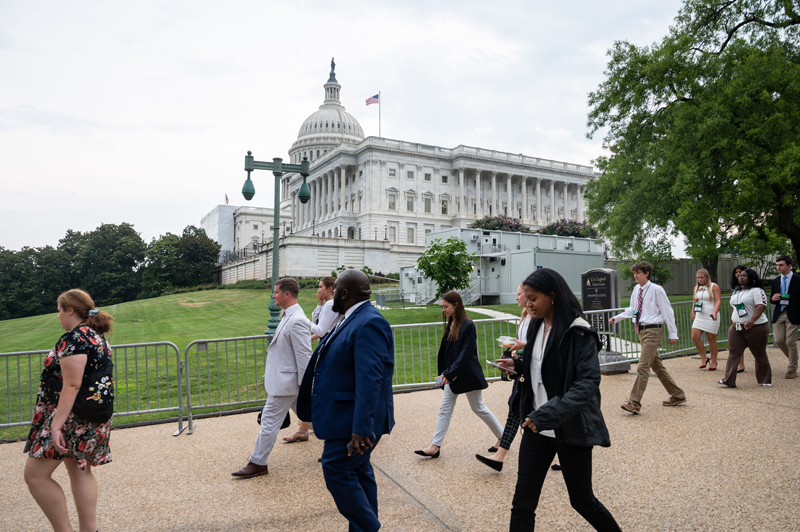 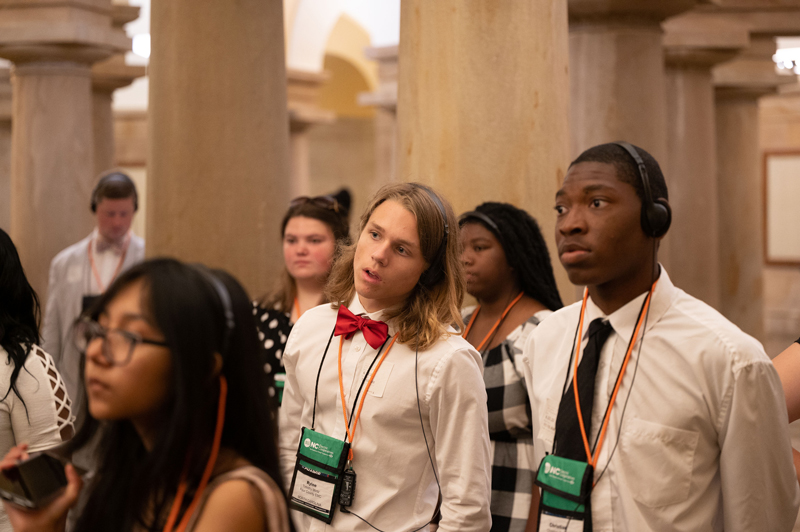 Meet all the 2022 Delegates

This is the NC Electric Cooperative Youth Tour, and in June it was back in action after two years of virtual events during the pandemic.

The Youth Tour is part of a national program that brings high schoolers, sponsored by their local electric cooperatives, to our nation’s capital for a week of learning and camaraderie. Students learn about the co-op business model, witness civics in action, and—in the spirit of the expression “work hard, play hard” — tour the sights and have some fun.

“After two years of not being in D.C. on Youth Tour, we were thrilled to finally resume the more than 50-year tradition of bringing North Carolina’s best and brightest to our nation’s capital,” says Paul Mott, Youth Tour coordinator and government affairs specialist for North Carolina’s Electric Cooperatives. “During the week, 29 students who represent the best our state has to offer were given the chance to learn more about our great country and the electric co-ops who serve our communities.”

Before being selected to participate in the Youth Tour, students likely hadn’t given much thought to their electric cooperatives. But by the time students boarded the bus in Raleigh, they had a firm understanding of the cooperative business model and how a co-op works, having formed one themselves.

“During the orientation sessions, students learn what a co-op is and the seven Cooperative Principles they’re guided by, giving some thought to how their local electric co-ops demonstrate those principles in the community,” Mott says.

Students also formed the “H2O Co-op” to manage snacks and drinks during the trip. The group elected a five-member board of directors, which then interviewed students interested in the co-op manager position. Once the manager was hired, they selected an assistant manager to load coolers each day and collect “Co-op Bucks” from Youth Tourists for snacks and drinks (everyone received 25 Co-op Bucks for the trip). The board of directors could adjust prices throughout the trip based on demand.

A trip to the Hill

One of the highlights of the trip each year is a visit to the Capitol for a tour and an opportunity to meet North Carolina’s elected officials and members of their staff. This year, NC Youth Tourists met with Rep. Ted Budd; Rep. G.K. Butterfield; Rep. Virginia Foxx; Rep. Richard Hudson; Rep. Kathy Manning; Rep. Greg Murphy; and staffers for Sen. Richard Burr, Sen. Thom Tillis, Rep. Patrick McHenry and Rep. David Price. 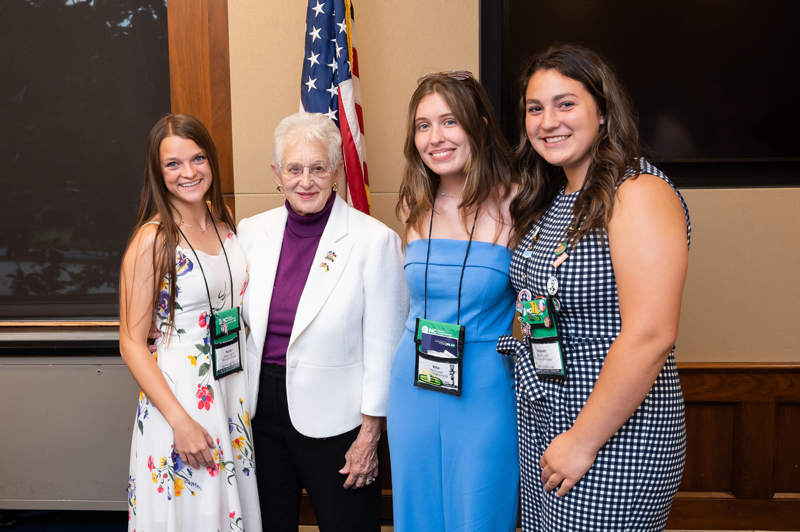 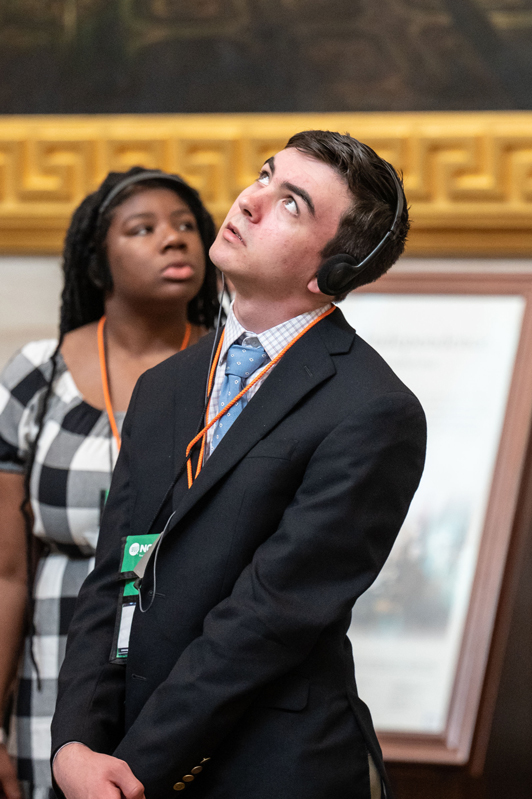 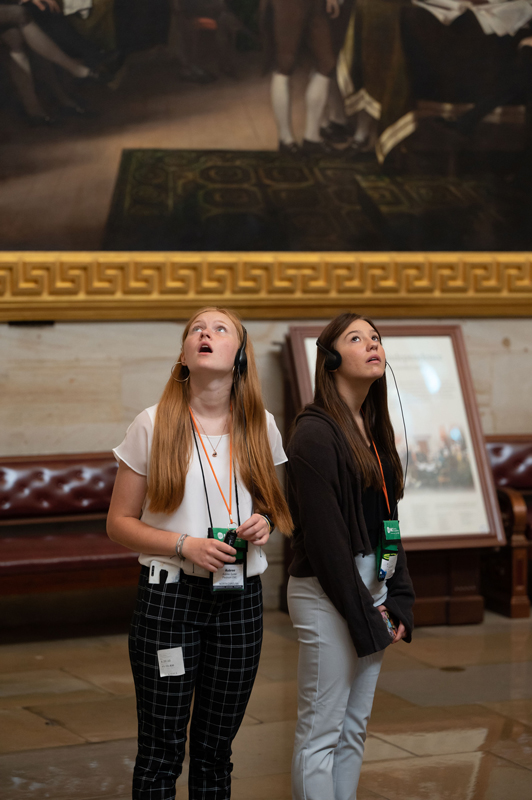 “One thing that inspired me was talking to North Carolina’s representatives,” said Vivian Villa Tapia, a 2022 Youth Tourist sponsored by Central Electric. “All of their stories and speeches made me want to become more like them, and to help strive for change in America.”

Elected officials fielded questions from students and discussed topics including their motivations for serving as an elected official and advice for young adults moving into a professional career, as well as dispelling misconceptions about how elected officials work together on the Hill — they operate in a more civil manner than many assume.

Congressional staff members, often not much older than the Youth Tourists themselves, discussed where they went to college and how they came to work in Washington, D.C., stressing that there’s no one path to work in government.

“Ensuring students can learn about our government in Washington, D.C., is critical to supporting the next generation of leadership in our nation,” says Rep. Hudson. “Meeting with the Youth Tour each year is always a honor, and I appreciate North Carolina’s electric cooperatives for once again providing this opportunity to students across our state.” 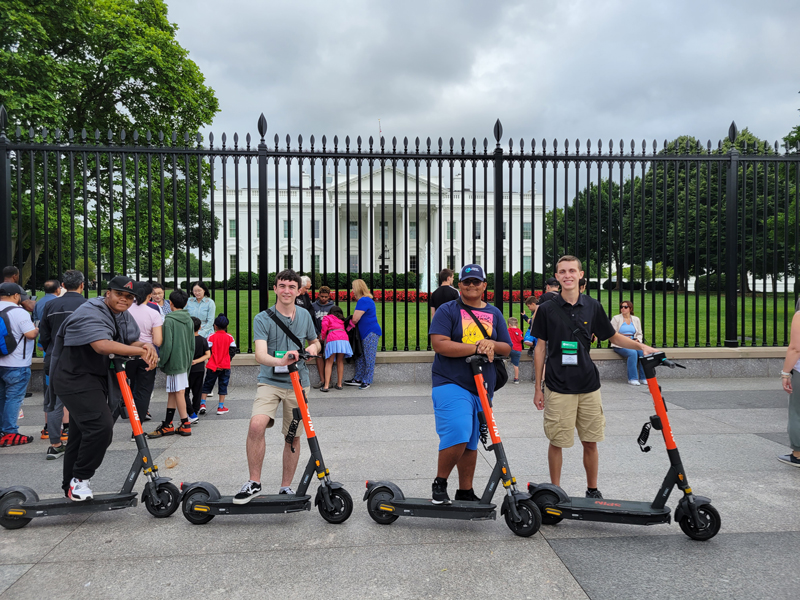 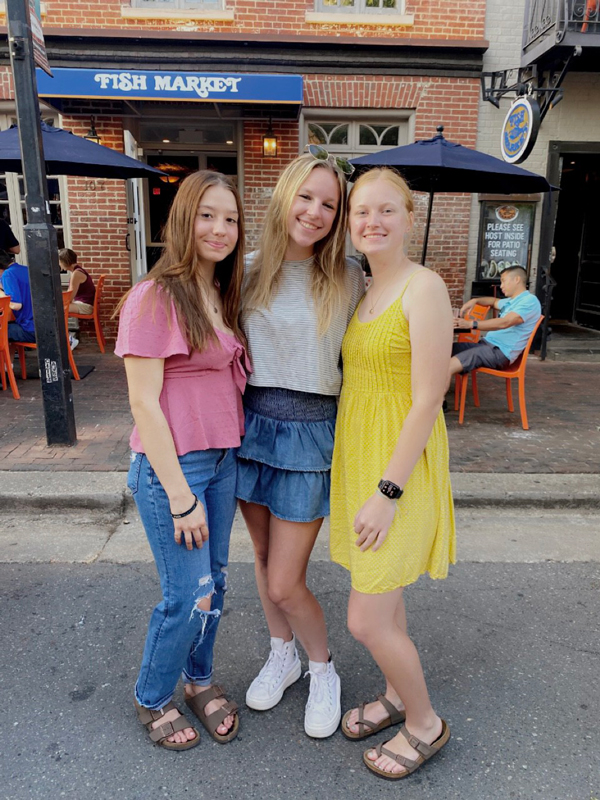 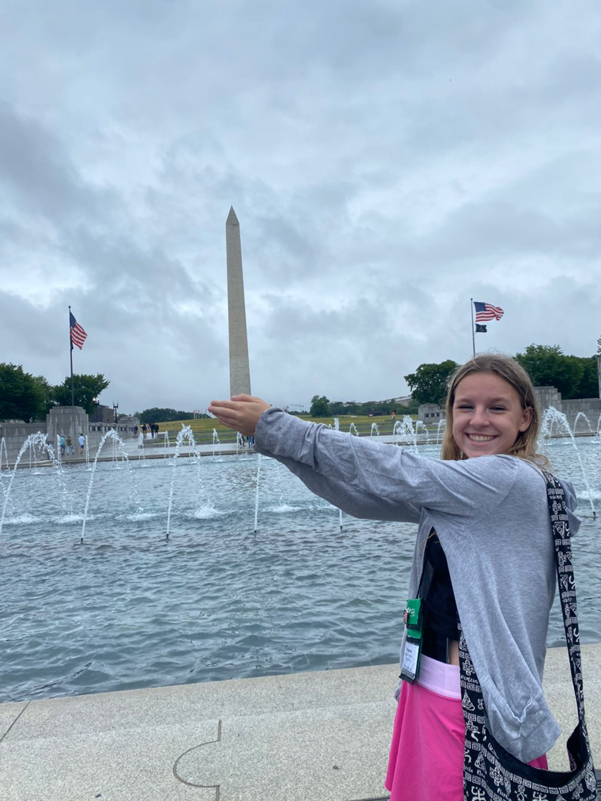 For many Youth Tourists, the trip marks their first to Washington, D.C., and their time there is well spent. This year’s itinerary included a Potomac River cruise on the Spirit of Washington; tours of the National Cathedral, Old Town Alexandria and monuments on the National Mall; visits to Smithsonian museums and the United States Holocaust Memorial Museum; and a visit to Arlington National Cemetery, where students witnessed the changing of the guard at the Tomb of the Unknown Soldier.

There were also plenty of opportunities for students to relax and have fun, including bowling, dinner at the Hard Rock Café, and meetings with other Youth Tourists from around the country to share experiences and trade state pins.

“Every day was a different experience and allowed you to see what Washington, D.C., had to offer, while also building bonds with people you never knew existed before the Youth Tour — not only from North Carolina, but from all over the U.S.,” says Miciah Freeman, a 2022 Youth Tourist sponsored by Roanoke Electric.

Ask Youth Tourists what they’ll carry with them from the trip, and they’ll be quick to mention the unique experiences, friendships made and a new appreciation for electric co-ops. But many hit on another takeaway that can stick with them for years: inspiration to better their communities and our country.

“We’re the next generation, meaning the country is in our hands,” Freeman adds. “We have to be the voice of reason and change.” 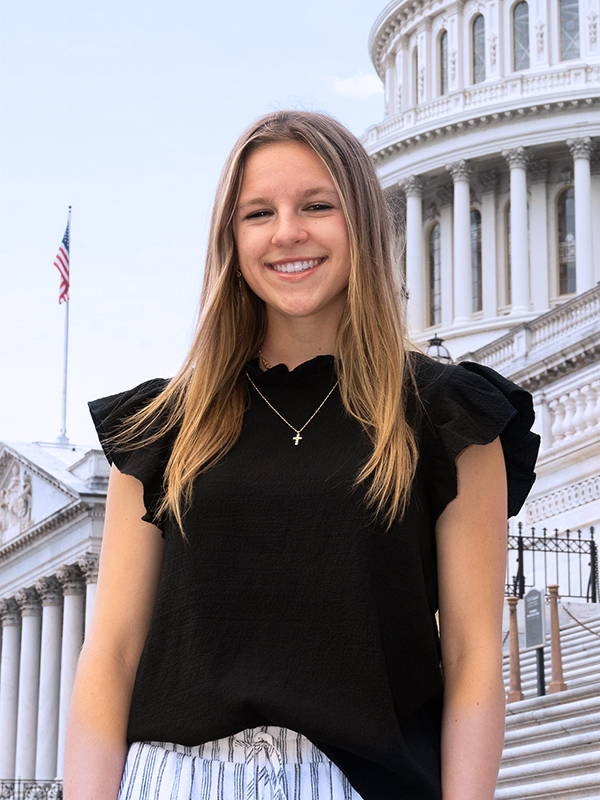 Youth Tour participants have returned home to share memories from the trip, but the journey is just beginning for Madeline Hiteshue, a member of EnergyUnited and a senior at Pine Lake Preparatory in Mooresville. Hiteshue was selected by her peers to represent North Carolina on NRECA’s Youth Leadership Council (YLC), which brings together one Youth Tourist from each state to participate in a national leadership workshop.

As this year’s YLC winner, Madeline will attend the 2023 Annual Meeting of North Carolina’s Electric Cooperatives in Raleigh, as well as NRECA’s 2023 PowerExchange in Nashville.