Slay Energy Vampires by cutting them off at the source 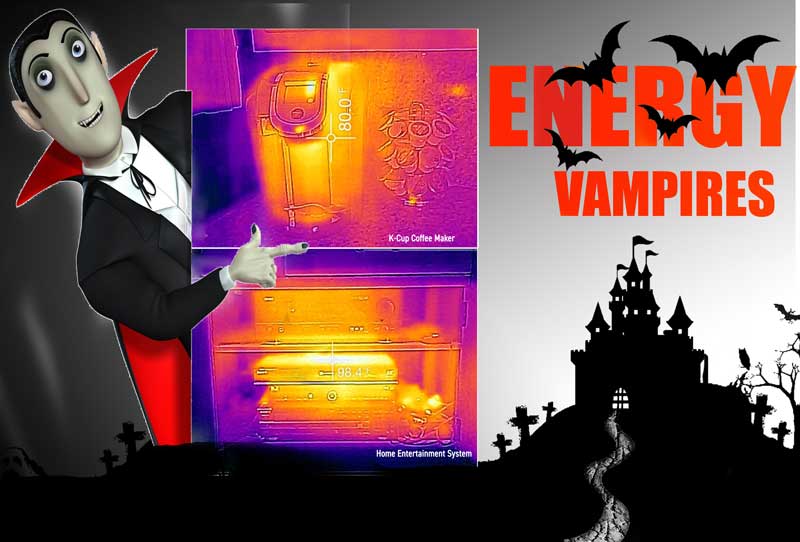 The month of October brings with it ghosts, ghouls and mummies walking the streets causing a scare. But did you know these frightening terrors may be lurking in your home year-round in the form of energy vampires?

Whether home entertainment systems, computers, kitchen equipment or cell phone chargers, these electronic “must-haves” can suck the energy right out of your home causing a horrific electric bill.

As children, most of us were told to turn off the TV when no one was in the room to keep from wasting energy. But with today’s high-tech televisions, turning off the set doesn’t save as much energy as you think. “Off” doesn’t really mean off anymore. Several devices found inside your home are commonly referred to as “energy vampires”—consuming electricity even when switched off. Energy vampires can be found in almost every room, but a favorite “coffin” is your entertainment center.

Most TVs today slowly sip electricity while waiting patiently for someone to press the “on” button. They also use energy to remember channel lineups, language preferences, and the time. Blue-Ray players, DVD players, DVRs, and cable or satellite boxes also use energy when we think they’re turned off. Studies show on average, a DVR cable box, turned off, costs consumers an average of $43.46 a year. Additionally, consumers use an estimated 25 household devices, resulting in an additional $100 - $200 per year being drained from your household finances.

Let’s not forget the kitchen. A k-cup coffee maker uses on average 1500 watts of power just to warm up while its necessary counterpart, the refrigerator, uses on average 180 kWh every 24 hours.

How do you slay other energy vampires? Try plugging household electronics like personal computers, monitors, printers, speakers, stereos, DVDs, video game players, and cell phone chargers into smart strips. Not only do smart strips help rid load monsters from your home, they protect sensitive electronic components from power surges. You can quickly turn off several items at once as most smart strips feature three outlet colors, each with a unique task. The blue outlet serves as a master plug and is ideal for a heavily used device like a TV or computer. Anything plugged into the red outlets stays on, electricity to these receptacles never cuts off, making them perfect for satellite boxes or other appliances that need constant power. The remaining outlets, generally neutral or green in color, are sensitive to current flowing through the blue outlet, so turning off the TV or computer cuts power to them as well. Some smart power strips can be made even smarter with timers or occupancy sensors that determine when to cut power to various devices. Smart strips are available online or at specialty electronic retailers and generally cost $20 or more depending upon their size.

While our parents may have asked us to turn off the TV to avoid unnecessary distractions, maybe they were simply trying to slay the energy vampires that haunted their electric bills.

Want to save even more power? Explore the Energy Efficiency Programs that Union Power Cooperative offers its member-owners.