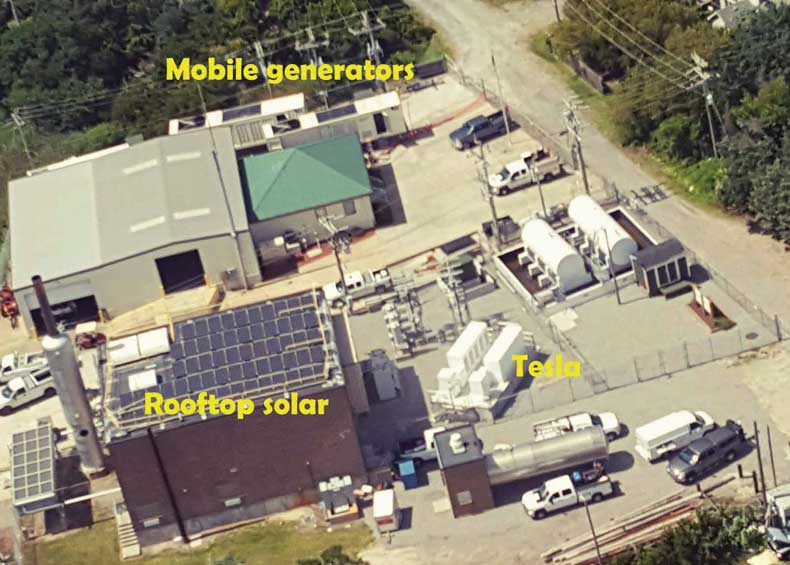 It has been nearly 9 months since the Ocracoke microgrid became fully operational. We thought now would be a good time for a project update.

Ocracoke receives grid power via the Highway12 transmission line that traverses Hatteras Island. Tideland takes delivery of that grid energy at a substation in Hatteras Village, where it then travels via submarine cable beneath Hatteras Inlet to the north end of Ocracoke.

When Ocracoke first received transmission power via Hatteras Island in 1965, the Rural Electrification Administration required the island to continue to maintain its own generating plant to provide emergency service in the event of an outage.

The island’s current 3-megawatt generator was installed in 1990 and is routinely used to provide peaking power on the hottest summer days when the island is hosting thousands of vacationers. The generator is owned by the NC Electric Membership Corporation (NCEMC), the power supplier for 20 of the state’s electric cooperatives including Tideland. While the generator is not nearly large enough to independently power the island during peak tourist season, it can provide enough energy in the off-season as long as island residents heed calls for conservation as needed. The presence of the diesel generator made Ocracoke an ideal site for NCEMC’s first microgrid project.

Solar panels mounted on the roof of the diesel generating plant provide 15kW of renewable energy as the sun moves across the sky.

To limit the risk of equipment damage in the event of flooding during a major storm, a raised concrete pad was constructed to serve as a platform for the project’s Tesla battery installation. Inverter units, located at the end of each of the battery lineups, give the system a great deal of flexibility. They enable the battery units to be charged by sources other than the solar panels. That helps when the days are short or the weather is poor. The batteries can connect not just to the solar panels but also to the grid or the diesel generator, when necessary. They charge during periods of low demand, such as late at night and early in the morning. The electricity is available when demand peaks and power is more expensive—or whenever back-up energy is needed.

Each nearly 4,000-pound Tesla Powerpack is made up of 16 individual lithium-ion battery pods. Built with a cooling and heating system adapted from the Tesla Model S automobile batteries, the Powerpacks can store 1 MWh of energy, which is roughly the amount of electricity used by 330 homes in one hour. That isn’t enough to power the island during an outage, but it can assist the diesel generator during its start-up, when initial demand can exceed the generator’s capacity. That makes for a smoother transition when outages occur.

The final key features of Ocracoke’s microgrid system are devices installed in participating homes and businesses on the island.

The Ecobee is a wi-fi enabled thermostat. The co-op can remotely change the thermostat settings a few degrees to reduce peak electric loads. Members are informed beforehand that a demand response event will occur, and they can override the thermostat adjustments at any time. Members can also monitor and control their thermostat settings remotely using their computer or a mobile device. As of mid-October, 197 Ecobees had been installed at Ocracoke.

Water heater controls are another tool for demand response that are located within members’ homes and businesses. Using cellular technology, the co-op can make small adjustments in hot water temperature in the storage tanks, but allow hot water to flow when the member calls for it. These adjustments generally go unnoticed by consumers, but taken together, can significantly reduce power demand.

We learned one valuable lesson during this summer’s Outer Banks transmission outage: To help reduce load when the mobile generators were put in service we asked NCEMC to keep both the water heaters and air conditioning systems turned off until the generator load leveled out. We quickly heard from about a dozen program participants who asked us to release their air conditioning systems and water heaters because they had decided to stay on their own whole house generators so they could have full use of their appliances and other household equipment. So we will be putting those households within their own sub-group so they are not affected by future emergency load control events.

At press time, NCEMC officials had not yet had an opportunity to island the microgrid, which means disconnecting from grid power and powering the island via the microgrid. The first such event was scheduled for 4 am on August 3, but was postponed due to the transmission outage. Officials were hoping to conduct the operation in late October.

Visit the Tideland EMC website to learn more about:

The Steps to Restoring Power