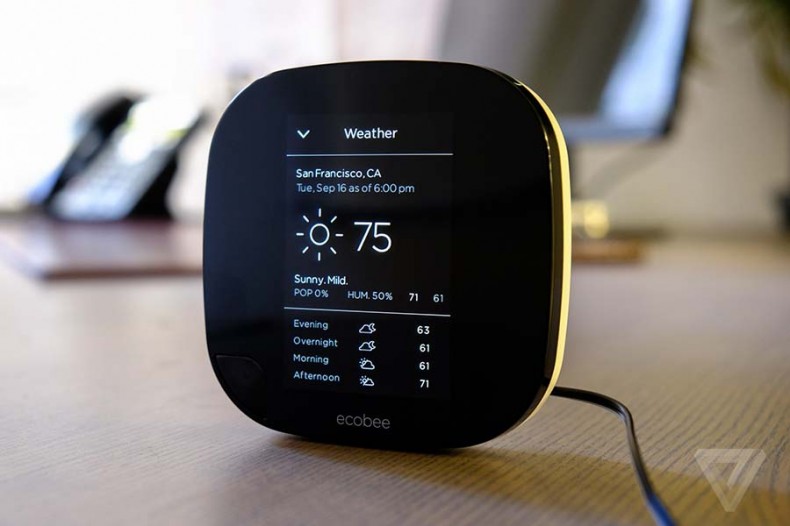 Besides its remote programming capabilities, the Ecobee smart thermostat doubles as a weather station.

Until recently, few people paid attention to the thermostat. It hung on the wall, waiting for someone to adjust the temperature either up or down. And while the thermostat has been known to be the cause of a few arguments between couples, “sexy” would never be a word to describe them.

Today, a new breed of thermostat is on the market and promises to turn what was once an afterthought into a powerful tool that can save energy and make your home more comfortable.

One of the major energy savings advances in thermostat design was the programmable thermostat. It was a simple concept. You told the device what temperature your home should be during specific spans of time on specific days, and it would handle the rest. Problems arose when reports began to surface that these thermostats did not save energy because people were either too confused by the user interface to actually program them, or people constantly adjusted them and defeated the programming capabilities.

Programmable thermostats are still around, and they can still save energy — but only if they are actually programmed.

A well-known smart thermostats is the Nest Learning Thermostat. Developed by former Apple employees, the Nest asks that you use the thermostat as a regular manual thermostat. After a week or so of use, the device remembers preferences and settings. It then begins to automatically adjust heating and air conditioning with a goal to save energy.

Other smart thermostat brands include the Ecobee (in a testing phase at some electric cooperatives), the Honeywell Lyric, and others sold by major HVAC manufacturers. They also have online capabilities.

Since the smart thermostat connects to the Internet, you can control it from your phone via an app — a convenient feature that many consumers enjoy. But the best part about using smart thermostats? You can come home to a temperature that’s just right for you and control the system while you’re away for extended periods of time.

A smart thermostat can cost between $200 and $400. The amount of energy saved will still depend on how long you are away from home and how much you override the system. In addition to smart thermostats, other home appliances are connecting to the Internet, which may become a critical component of a home for the future. For thermostats, that future is now.