A guide to Transmission Towers

The conductors — or energized lines — are grouped in threes to transmit electricity more efficiently.

Transmission structures and towers are like interstate highways for electricity, carrying mass volumes of high-voltage current over long distances. These structures stand 55 feet tall or more and connect power plants to a series of substations, and they tie one bulk power region of the grid to another.

A closer look at these towering behemoths reveals interesting details that help you better understand why structures are designed a certain way. As you look at them, always remember to stay a safe distance away.

First, determine what you're looking at. Higher voltages on power lines require more space between each line and other objects, allowing people, vehicles and other equipment to move freely underneath. For this reason, transmission towers usually stand 55 feet to 150 feet high. Most are made from steel, but some are concrete, wood or even ductile iron. Wooden distribution poles, found in neighborhoods (unless your lines run underground), are generally about 40 feet tall.

Transmission voltages usually run between 23,000 volts and 765,000 volts. Compare that to the voltage of your home's electrical sockets: 120 volts for most outlets, 240 volts for a clothes dryer or stove range. Voltages in your home are enough to kill you, so power lines carry a much greater wallop.

Transmission tower conductors —the energized lines — are made of steel-reinforced aluminum cable and are always arranged in sets of three. There could be one conductor line per group (three total), two conductor lines per group (six total), and sometimes more. Groups may be arranged in a triangle or run level next to one another, but there will always be three (or a multiple of three).

This three-way grouping helps electricity travel efficiently. However, if you look at the tower's top, you may see one or two smaller, solitary wires. These wires go by several names — overhead ground wire, static wire, and pilot wire. The wire absorbs or deflects lightning strikes, conveying excess electricity safely to the ground. Under normal conditions the overhead wire does not carry electricity.

Alternatively, you may notice fiber-optics running a few feet below transmission conductors — seemingly small, by comparison. Adding telecommunication lines gets the most out of the large investment necessary to build transmission systems. Fiber-optic lines may be operated by the utility or leased to cable or phone companies. 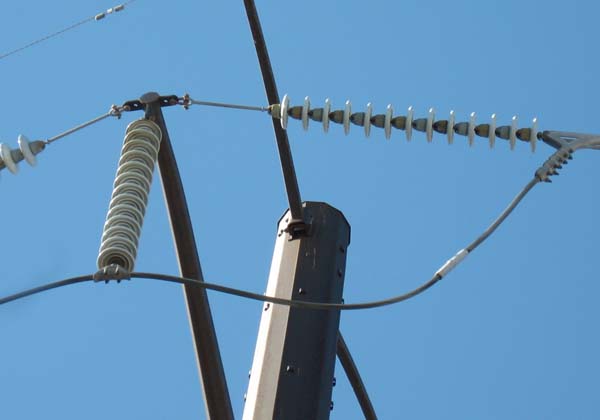 Bell-shaped insulators — commonly referred to as “bells” — keep electricity on the wires from flowing through the steel support structure to the ground.

The first rule of thumb: the higher the transmission tower, the greater the voltage. Transmission lines don't touch the towers that support them — if they did, the current would flow to the ground. They're separated from towers by bell-shaped insulators (known as "bells").

Higher voltages require more separation between conductor lines and towers — hence more bells. For example, a line of 69,000 volts has four bells; 115,000 voltage has seven bells. But sometimes bells are added in case a utility wants to increase voltage later, so counting them isn't a surefire way to estimate voltage.

You also may notice nesting birds, like hawks. Early tower designers discovered large birds like to build nests on the girders. Birds can cause an outage if excreted waste lands on an insulator and triggers a short circuit. So to prevent random, potentially dangerous nesting, designers include special platforms for birds.

Maurice Martin is senior program manager for the Cooperative Research Network, a service of the National Rural Electric Cooperative Association.