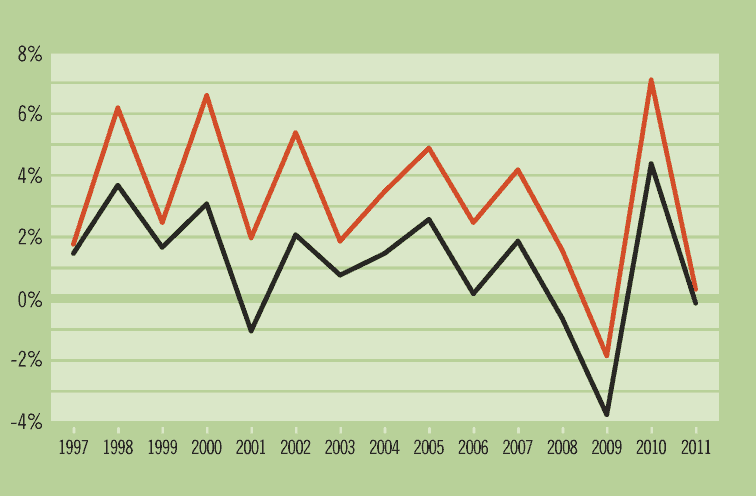 As an owner of your cooperative, you may be interested in how business has been in recent years. Following are summaries of reports for the year 2011 issued in June by the National Rural Electric Cooperative Association. (Special thanks to David Olivier.)

Nationwide, cooperatives saw a slight increase in sales in 2011. During the depth of the recession (2009), sales declined nearly 2%, then rose 7% in 2010 and again by .4% in 2011. The slow growth in sales could be attributed in part to consumers' effective energy efficiency strategies. (In the electric industry as a whole, sales declined slightly in 2011.)

Even so, co-ops are outpacing the electric utility industry as a whole in sales growth, and that has been the case since 1997. (See graph.)

Overall, co-op growth in membership itself has been slow in recent years. After seeing annual growth rates of between 2% and 3% from 1974 to 2007, growth has been less than 1% per year since 2009. There are some exceptions, especially in suburban areas. 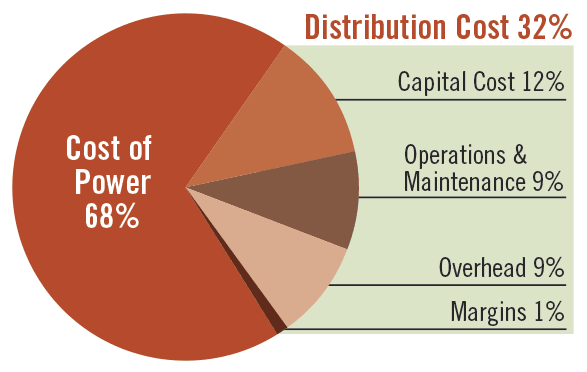 On average, power costs represent over two-thirds of a distribution co-op’s total costs. Distribution costs make up the other third.

Because the cost to generate and buy wholesale electricity has been rising in recent years, consumer rates have risen as well. Since 2000, a typical household's monthly electric bill has risen a total of $48, or 1.8% per year, adjusted for inflation. (That increase, however, is less than the 2.5% inflation rate itself during that period.) Across the nation, co-op rates in 2011 climbed 2.1%, which was more than the .3% they rose in 2010. As the industry steps up investment in infrastructure and technology, consumer rates are expected to continue upward.

Your cooperative faces two main cost factors: the cost to acquire electric power (from generation plants or from other utilities on the wholesale market) and the cost to distribute power to member homes and businesses (including personnel, substations, poles, lines, vehicles, debt, etc.) On average, power costs comprise two-thirds of a co-op's costs, while distribution costs comprise the other third. (See chart.)

NRECA calculates that co-ops spent $439 per member to deliver electricity in 2011. A co-op's expenses to build and maintain its system are generally higher per customer than they are for investor-owned or municipal utilities because co-ops serve a far lower density of accounts (fewer accounts per mile of power line) than other utilities.

Your cooperative can help you manage your electric costs in a number of ways. Contact your cooperative to learn what programs are available to members.