Spend a Day on the Water without owning a boat

It’s been said that the two happiest days of a boat owner’s life are the day one buys a boat, and the day one sells the boat. There’s probably some truth to that, but you don’t have to find out the hard way. There are ways to get on the water without taking on the highs (and lows) of boat ownership.

Within a few miles of you (give or take), there’s probably a facility — municipal park, state park or utility company — that has watercraft for rent on a daily basis. Many have small johnboats, 12 to 14 feet in length, and some also offer deep-cycling batteries and electric motors as well. So, for less than the price of a round of golf, you can spend a day on the water.

For instance, Lake Benson Park in Garner has a boathouse with rentals including kayaks and johnboats. They’re open on weekends from April to October. The lake is about 650 acres and has a variety of fish. Boat rentals are $8 per hour or $40 for a day. Over in Orange County, University Lake and Cane Creek Reservoir are operated by Orange Water and Sewer Authority (OWASA). They also have seasonal rentals. Rates vary slightly depending upon if you are an OWASA customer, but at most a boat is $8 an hour and a motor and battery are $22 for the day. They usually open for weekends at the end of March.

Equipment for electric boats-only lakes is both standard and specialized. Standard because you probably have some of it on hand; specialized because space in the craft and afloat is limited (but not necessarily limiting).

These smaller craft typically lack storage space, so leave the triple-decker tackle box at home. A couple of small bags or boxes of seasonal lures should suffice, and it adds to the fun of scaling down. Ditto for rods and reels. I like to pack three outfits, at least two of them spinning rigs.

When renting a boat (or using your own), you’re required to have a throwable flotation device like a seat cushion. Go ahead and bring an extra if you are renting, and two if you’re using your own boat.

The extra 2 or 3 inches are a huge difference in comfort when sitting on the bench seats in a johnboat. Veterans often use commercially available seats that clamp onto the bench and have firm back support. The best seats will swivel, which allows for easier casting. Careful, though — they can also slip if you lean too far back.

One of the best tools for fishing any lake, hands down, is a portable fish finder unit. The model I use has a suction cup transducer and uses D-cell batteries for power. It costs about $100 and is worth every penny. Just as on any larger reservoir, having an idea of bottom contour, structure and depth allows for optimal lure choices and presentations. 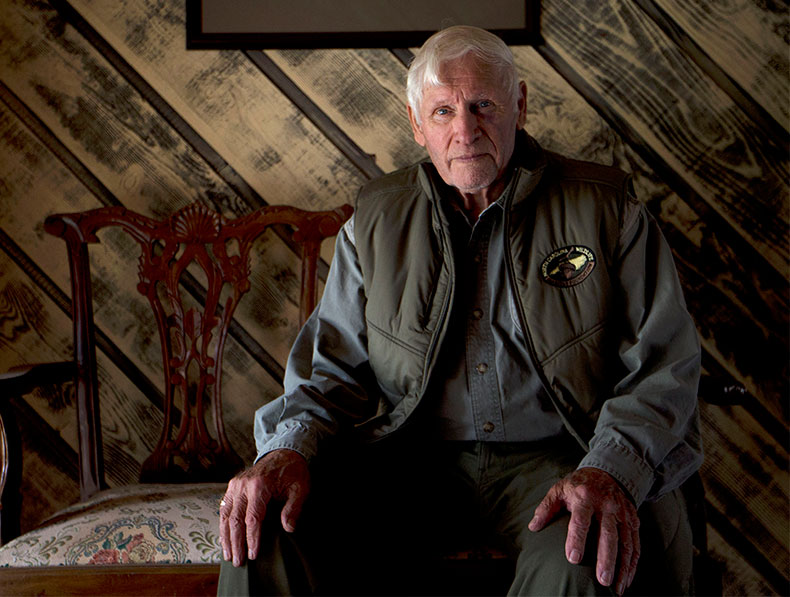 Eddie Bridges of Greensboro, former wildlife commissioner and founder of the NC Wildlife Habitat Foundation, passed away on May 18 at the age of 87.

Eddie accomplished many things in his career. His idea of lifetime hunting and fishing license sales, and the subsequent creation of the Wildlife Endowment Fund, was perhaps his greatest vision. The fund works by spending the accrued interest, not the principal, on programs and projects that benefit fish and wildlife. Since the fund’s inception, the Wildlife Commission has spent more than $50 million in interest on programs and projects.