The author’s German shorthaired pointer, Annie, is an example of a hunting dog trained in both upland and water work. Photo by Mike Zlotnicki.

Versatility is defined by something being able to perform multiple tasks effectively. Take sport utility vehicles as one example. The Swiss Army knife is another. In the gun dog world, the Continental pointing breeds of the North American Versatile Hunting Dog Association (NAVHDA) are the versatile equivalent to a Swiss Army knife, bred and trained to be exceptional in both upland and water work. One dog does it all.

Dr. Jesse Grimes was one of the founders of the Carolinas Chapter of NAVHDA. During a lunch at Cabela’s in Garner, he spoke about the history of the chapter and the philosophy of versatile dogs.

“Back in the mid-’90s, a gentleman named Roy Thilburg moved here from Ohio, and he put an ad in the Raleigh paper. He wanted to start a NAVHDA chapter,” Jesse said. “We met at a lady’s house in Winston-Salem — maybe eight of us — and sat around and talked about what NAVHDA is and does. He explained all that to us, and that’s how we got started. We started having training days at various hunting preserves, and Roy was a big leader with that.” 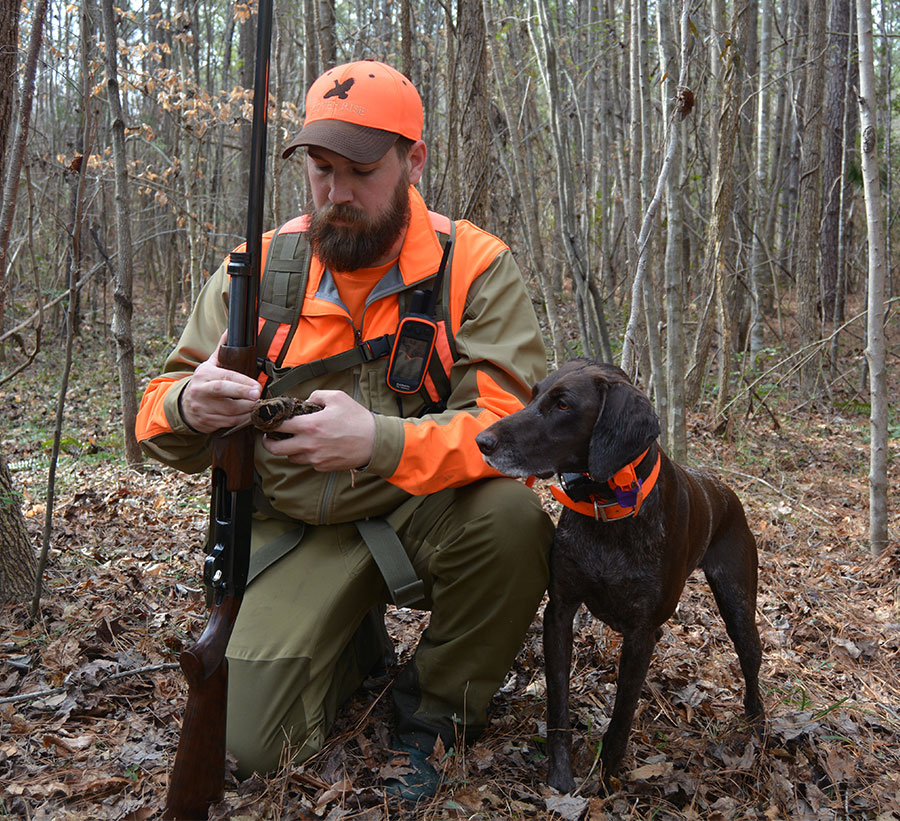 Thomas Harvey of Cary harvested this woodcock over a point from the author’s German shorthaired pointer, Annie, in Uwharrie National Forest. Photo by Mike Zlotnicki.

Today, the Carolinas chapter has about 60 members, and there is an offshoot chapter — the Tarheel chapter — as well.

The international nonprofit organization’s purpose is to foster, promote and improve the versatile hunting dog breeds in North America; to conserve game by using well-trained reliable hunting dogs on both land and water; and to aid in the prevention of cruelty to animals by discouraging nonselective and uncontrolled breeding, which produces unwanted and uncared for dogs.

“I also think it’s good for exposing members to other breeds,” he said. “I think a lot of people out there are ‘breed blind’ [irrationally favoring one breed] if not downright ‘kennel blind’ [favoring one breeder of a particular breed].”

For example, as a Carolinas chapter member myself and owner of two German shorthaired pointers, I had never seen a Small Münsterländer until I joined our chapter and met Darryl McNeill and his dog, Timber.

The organization has hunt tests (not competitions) where dogs are judged by three judges against a standard. Dogs under 16 months of age can take a Natural Ability Test, where they have to show they can swim, point planted quail and track a live pheasant. There is a mid-training development Utility Preparatory Test (that few people do), and there’s the Utility Test.

The goal is to have a versatile hunting companion — a dog equally at home in a duck blind, a thick woodcock covert, a cutover with bobwhite quail and even on your couch.

The Utility Test consists of three main segments with multiple secondary behaviors judged. In field work, dogs are judged during a hunt for planted chukar. The dogs must be steady (not moving) to wing, shot and fall, and must retrieve to hand. There is also an exercise where a dead duck is dragged about 150 yards in a varied line (out of sight of the handler) and the dog must track and retrieve it.

Water work includes a duck search, where dogs are sent with a command and must search for a planted duck about 150 yards away for 10 minutes with no further commands. The duck search exercise is typically what separates the class of dogs, as it is a test of heart and drive. For the duck retrieve, a dog must heel through a serpentine pattern of heeling stakes and remain steady by the blind while the handler leaves and shoots distraction blanks. Hidden gunners fire distraction blanks, and the handler then shoots and sends the dog to retrieve the duck without hesitation.

The goal is to have a versatile hunting companion — a dog equally at home in a duck blind, a thick woodcock covert, a cutover with bobwhite quail and even on your couch — a beloved pet as well as a dog that can be hunted wherever game birds can be found, on land or water.