‘Timberdoodles’ are a solitary alternative for dove hunters 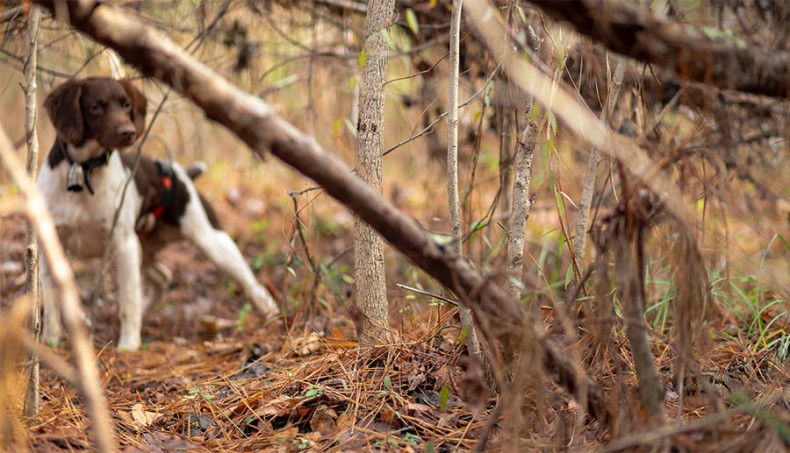 Bentley, Thomas Harvey's Brittany, is pointing a woodcock on the ground (see if you can spot the bird's round, black eye in the bottom right corner). Photo by Thomas Harvey.

When I started bird hunting as a child in the ’70s, “birds” were bobwhite quail. My pointer, Molly, and I would hit the fields and hedgerows whenever we could, and there were enough quail to provide action on most every hunt. Times have changed.

Now, four decades and four dogs later, quail are tougher to find. Cleaner farming, development and loss of habitat, among other factors, have affected quail populations in many parts of the country. What’s an upland hunter to do? Enter Scolopax minor, the American woodcock — a.k.a. the timberdoodle.

The woodcock is pretty much the opposite of the “old” bobwhite quail. It’s usually found alone (not in coveys) and prefers wet ground like creek bottoms with thick cover and understory (young trees below mature canopies) where it can forage for its favorite prey—earthworms—using its flexible bill tip. (Adult quail eat primarily seeds and plant matter.)

I’ve been fortunate to have hunted with two excellent woodcock guides, Charles Grayson Guyer of Lost Highway Kennels and Stephen Faust of Stoneybrook Outfitters. Stephen likes to look for rivers that run north‑to‑south and then look for a creek running off the river. He thinks the migrating woodcock use the rivers as flyways. From his experience, the birds also use roads the same way. He said the birds feed in the dark and move to south-facing hillsides to roost later in the mornings. Grayson likes to see switch cane and privet growing in the bottom areas. If there’s a nice stand of cover, he will hunt the edges of it.

As for dogs, one can use a pointing breed or a flushing breed, but woodcock hunting with a pointing breed is my preference. I have German shorthaired pointers. Stephen has his own line of Gordon setters and Grayson favors the French Brittany. No matter the breed, some individual dogs take multiple exposures to woodcock before the light comes on and they realize the birds are quarry (that is, an animal to be hunted). Once that happens, though, woodcock are wonderful for pointing breeds because they “hold tight,” and there aren’t a ton of wild flushes. Some dogs dislike retrieving woodcock, and I’m not sure why.

Traditionally, woodcock dogs will sport a bell on their collar that helps the hunter to follow an unseen dog through the coverts. When the ringing stops, the dog is on point and the hunter heads to where he last heard ringing. I’m not a fan of the bell, so I use electronic beeper collars with my dogs. When one goes on point, the lack of movement activates the beeper, and you head for the sound.

There is plenty of public land available for those wishing to hunt woodcock. Stephen, of Union Grove, is a regular at Uwharrie National Forest. In the central part of the state is also Caswell Game Lands, along with Jordan and Harris game lands. Butner-Falls of Neuse Game Land has some good habitat in places. Farther east, Sandhills, Lantern Acres, Vann Swamp, Roanoke, Holly Shelter game lands and Croatan National Forest will have birds. Out west, Sandy Mush Game Land, Pisgah and Nantahala national forests have habitat in places worth exploring.

And after the hunt? Stephen likes to pluck the breast, leave the skin on and sauté in butter, serving it rare. The legs and thighs are also good table fare. The flavor is unique, something like mourning dove. For some it’s an acquired taste, just as many aspects of chasing the timberdoodle can be.