Change your perspective with an exhilarating airborne experience

By Renee Gannon and Pamela A. Keene 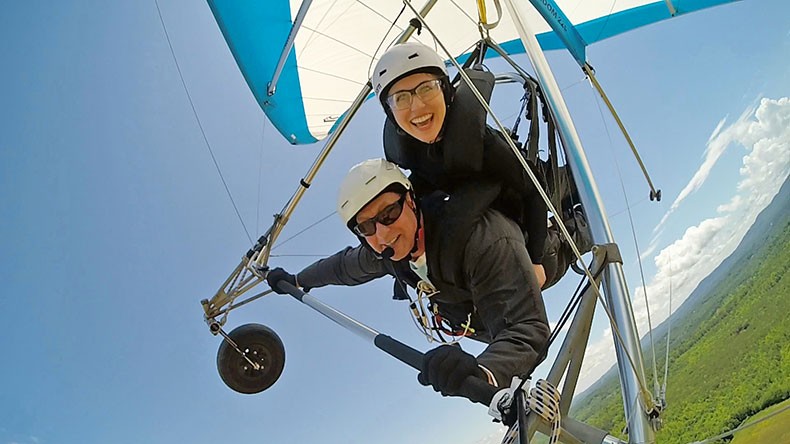 Sometimes you just need to raise your sights for a different perspective. There are plenty of ways to take to the wide open skies above our state — from hot-air ballooning and paragliding to hang gliding where the Wright Brothers launched aviation. Whether in the mountains, Piedmont or along the coast, North Carolina has plenty of options to get a view from above. 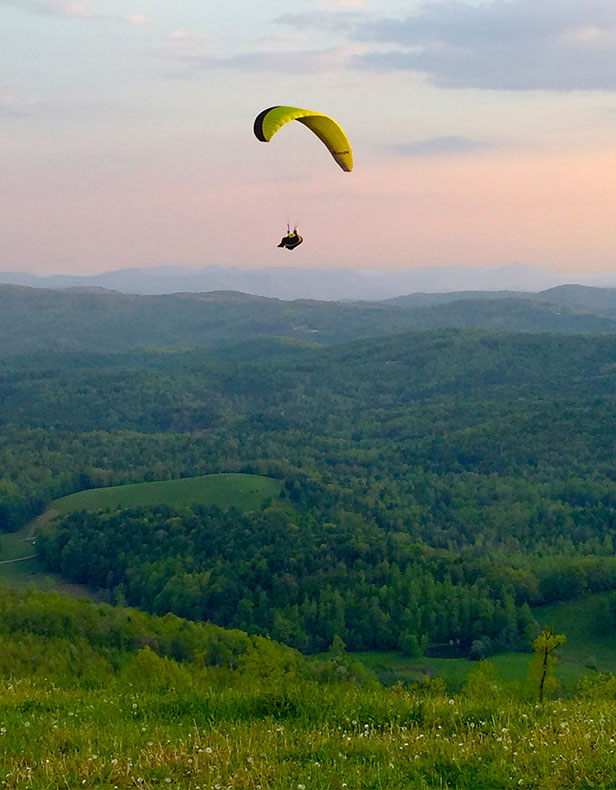 Dancing with the wind

In the mountains, thermals — rising, heated air — serve as your passage for flight. At Thermal Valley Hang Gliding (thermalvalley.net or 828-292-7473), situated between Morganton and Lenoir, the pilot for the tandem hang-gliding experience knows exactly where those thermal columns push up, leading to an exciting flight.

Owners Craig and Laura Pearson want to share their joy of free flight with the public, and hope some participants catch the flying bug and return for advanced training to become solo pilots. After a 15-minute ground school session on flight expectations, then helmet and safety glasses fittings, the passenger on this tandem ride slips into a body hammock nestled under the glider’s canopy and above the pilot. The tandem hang glider is towed into the air behind a light aircraft. At about 1,500 feet, the tow rope is released, freeing the glider to swerve and move up and down with the wind and thermals as fuel.

The 360-degree scenery of the mountains and foothills stretches to a view of the downtown Charlotte skyline on clear days. The quiet is punctured by just the wind and fun chit-chat with the pilot (and a few loud “woo-hoos”). Passengers also learn basic controls of the glider. The flight can range up to a mile high and lasts on average 10–35 minutes, before descending and landing on the runway like an airplane.

“It feels just like flying in your dreams … an unforgettable, dynamic experience.”

Aerotow hang gliding is “a way families can share a memorable experience and walk away with a positive feeling for hang gliding,” Laura says. And feel the freedom of flight.

Thermals also fuel the fun north of Wilkesboro at the Sky Retreat’s Blue Ridge Paragliding Center (theskyretreat.com or 704-907-6963). Owners Dima and Merin Sazinas have traveled all over the world as professional ballroom dancers and paragliders, but, thanks to Google Earth, found a home overlooking the Blue Ridge valley where their passion for paragliding (and dancing) could be shared.

Located at 3,300 feet, an engine isn’t needed for flight here, just patience (or “para-waiting,” as Dima quips). For a “butter smooth” safe tandem flight, a steady south to southwest wind is ideal. But that isn’t a daily occurrence. With the ever-changing weather conditions, Dima and his crew fly just shy of 100 tandem flights a year. He provides a two-week window to interested flyers, then a two-day notice once conditions look good for flight. When conditions are right, the tandem paragliding experience is worth the wait.

Once in the air, Dima and his tandem partner lift to about 3,800 to 4,300 feet. To go higher, he says, will give you a view of just the treetops. At this elevation, gliders go sightseeing at the nearby Cascades waterfall and to the Dark Sky Observatory in Purlear, as well as gain a bird’s eye view of the surrounding Blue Ridge Mountains.

When talking to Dima about paragliding and the freedom it provides, you notice why he has a passion for it. Dima smiles and explains that with every maneuver, the air is your partner, you are “dancing with the wind.” 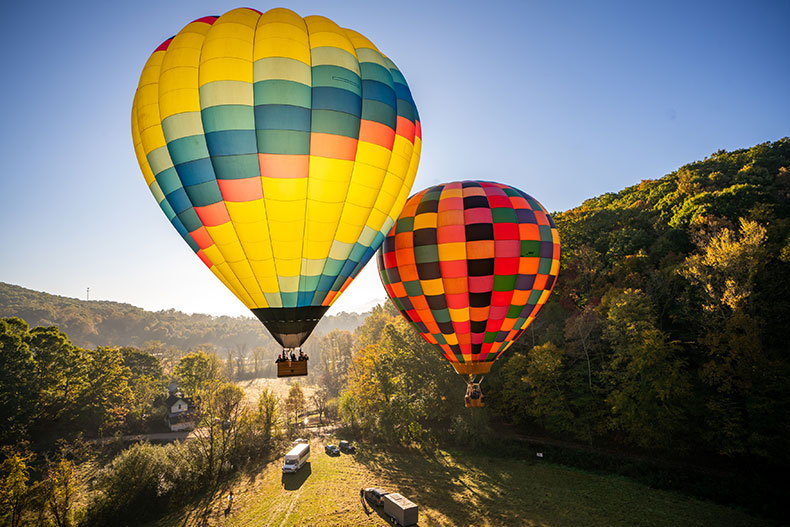 A view of the Piedmont

For a quiet, leisurely float above the verdant landscape in Iredell County, check out Big Oh! Balloons in Cleveland (bigohballoons.com or 704-872-7761). For the past 40 years, Big Oh! owners Charles Page and Kristie Darling have been taking folks on hot-air balloon rides to cross an item off their bucket list, celebrate birthdays, become engaged or even get married.

“People have so many fantasies about hot-air ballooning, and many different reasons for wanting to soar,” says Kristie. “Our rides feature smaller baskets — where passengers stand with the pilot during the flight — so the rides can accommodate two to three people for the one-hour journey.”

The couple can also coordinate rides for larger groups.

“Statesville and Iredell County are home to balloon manufacturer FireFly Balloons; we have about a dozen balloon pilots that partner with each other. We’ve had as many as 21 balloons launch at one time for group rides.”

Even if you’re not into taking flight, visit Statesville for the 47th Annual Carolina BalloonFest from Friday, October 15, through Sunday, October 17. That’s when the county celebrates the colorful sport with dozens of hot-air balloonists offering tethered and free-floating rides, plus arts and crafts and entertainment. The event raises funds for charity. 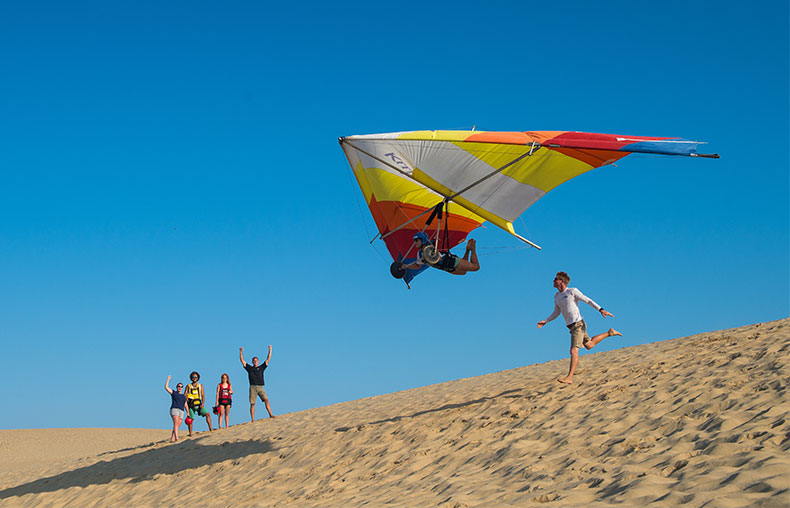 Sailing over the dunes

Coastal North Carolina’s fame as the birthplace of aviation carries on through the Kitty Hawk Kites Flight School (kittyhawk.com or 1-877-359-8447), with multiple locations on the Outer Banks. Offering hang gliding along the same sandy dunes where Wilbur and Orville Wright took their first flight, the school replicates the experience in modern terms.

“We’re not just offering rides, we’re offering full-fledged hang-gliding instruction,” says Wolf Gaidis, flight park manager and lead instructor at the Kitty Hawk Kites Flight School at Jockey’s Ridge. “Everyone does ground school for the first 25 or 30 minutes, then we take them out to the dunes for a couple hours and several attempts at flying a hang glider.”

Harnessed-in students fly solo, launching their hang gliders with the wind in their faces, running along the dunes.

“During flight you’ll feel like you’re suspended in space, gently supported by a cloud — a wow experience — before gently landing on the sand,” Wolf says.

Parasailing is also available, providing a peaceful, bird’s-eye view while being towed by a boat below. For longer rides at higher altitudes, Kitty Hawk Kites has inland sites for tandem hang gliding, where a student and instructor fly together.

“The gliders are pulled up by an ultralight via a tow rope and when they reach an altitude of around 2,000 feet the instructor releases the glider from tow for a 10- to 15-minute ride back to the ground,” Wolf says. “It feels just like flying in your dreams … an unforgettable, dynamic experience.”

Renee Gannon is the senior associate editor for Carolina Country. Pamela A. Keene is a freelance journalist who writes for magazines and newspapers across the Southeast and nationally.